Longtime no-tiller Ray Styer, whose success with no-till, cover cropping and soil health improvement inspired numerous farmers and consultants over the last 4 decades, passed away Nov. 11 in North Carolina. He was 85.

Ray is survived by his wife, Sara, and children John, Denise, Corrine and Mark. Funeral services are scheduled for Friday, Nov. 16, 2018. Click here to see the obituary and service details.

The Reidsville, N.C., grower and Sara purchased their 155-acre farm in 1958. Ray started no-tilling corn with his neighbor’s new planter in 1970 and began experimenting with cover crops during the 1970s. Ray eventually started planting corn into living cover crops long before the term “planting green” became widely known in the farming industry. 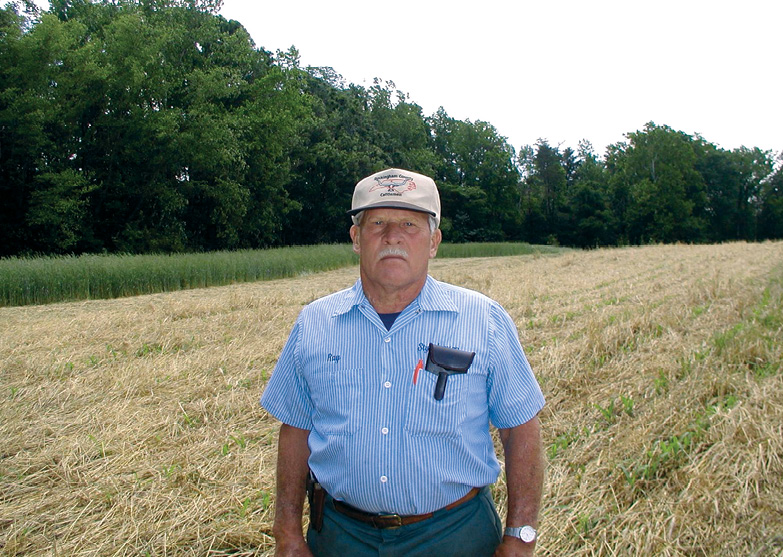 No-Till Farmer featured Ray in this 2013 feature story. Soil health was of utmost importance to him, as the organic matter and nutrient-cycling abilities of his soil allowed him to eliminate the need for commercial fertilizers.

“When I first started farming these acres I could plow the weeds under in the fall, and when I plowed again the next fall you would see the last year’s weeds were still there, not even half rotted. There was no life in the soil,” Ray told No-Till Farmer.

“Now my soil has a good, dark color in the top layer. It’s friable, full of earthworms, and it holds together better. I can drive into my field and not sink down to the axles. My organic matter has increased, and I’ve been able to drastically cut my inputs. By building my soil up with cover crops and no-till it holds moisture better and just works better.

Although he left the dairy business in the 1980s, he fed silage corn and hay from his fields to stocker steers by the trailer load.

“My crude protein, acid detergent fiber, total digestible nutrients and net energy-lactation levels are always right in the desired range. I never have to add any supplements to my feed,” Styer told No-Till Farmer. “My nutritionist was so impressed with my crops and their quality that he decided to no-till his crops, too.”

“His soils made the slake test the most powerful demonstration to teach that the soil is alive, which helped change many minds and hearts,” Archuleta wrote. “He had a great passion for teaching and farming.”