Researchers at the Max Planck Institute for Chemical Ecology in Jena, Germany, discovered that certain leaf metabolites can be used as markers for mycorrhizal associations.

The discovery of foliar markers provides scientists with an easy-to-conduct tool to screen large amounts of plants for mycorrhizal associations without having to destroy them. This new tool could contribute to breeding more efficient and stress-tolerant crop varieties for sustainable agriculture.

The relationship between plants and so-called arbuscular mycorrhizal fungi is considered to be one of the most important factors for the evolution of terrestrial plants. More than 70% of the higher plants establish an association with these fungi, which are believed to be more than 400 million years old.

The mutualistic association allows the plant to better absorb nutrients, such as phosphate. Moreover, the symbiosis makes the plants more tolerant of biotic and abiotic stresses, such as insect attack, pathogens and drought.

For plant breeders, mycorrhizal fungi are very important because global phosphate resources are limited. However, until now analysis of the fungal association was only possible by excavating the plant roots. This is not only time-consuming; it also destroys the plant. 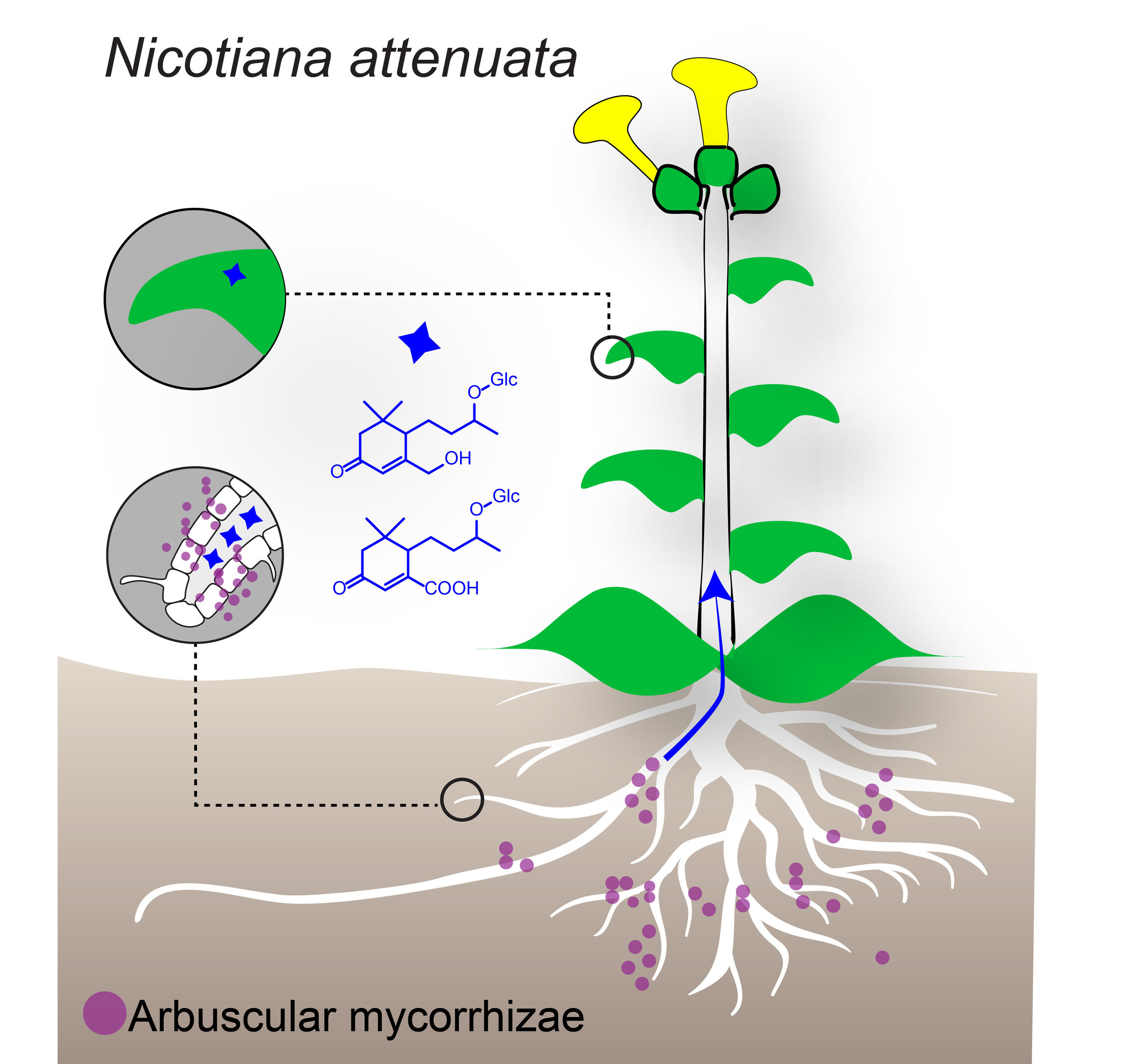 Scientists at the Max Planck Institute for Chemical Ecology and their partners have now found substances that accumulate in the leaves when arbuscular mycorrhizal fungi successfully colonize plant roots. It has been known for a while that these substances, so-called blumenol C derivates, are produced in the roots exclusively after colonization with the mutualistic fungi.

However, until now, all attempts to find a reliable and specific leaf marker have failed.

For their studies, the researchers analyzed the leaf substances with a highly sensitive technique and compared them to leaf compounds from plants that had not been able to establish fungal associations.

"Through targeted and highly sensitive mass spectrometry, we were able to find mycorrhizal-specific changes also in above-ground parts of the plants," Ming Wang from the Jena Max Planck Institute describes the unexpected findings. Further experiments confirmed that the observed changes are related to root colonization mycorrhizal fungi.

"The blumenols are most likely produced in the roots and then transported to other parts of the plants," Martin Schäfer explains.

Most ecological interactions are highly species-specific. However, the scientists were able to show blumenol accumulation in the leaf tissues of other plant species, including important crop varieties and vegetables. The ubiquity of markers in the shoot across distant plant families is likely due to the long common history of mycorrhizal fungi and plants, suggesting that theses markers play an important role for plants colonized with arbuscular mycorrhizal fungi.

Regardless of the function of these substances, the approach provides a robust and easy-to-apply tool which has the potential to fundamentally change the future of mycorrhizal research and plant breeding. Ian Baldwin, the head of the Department of Molecular Ecology, summarizes the new possibilities:

"Our diagnostic marker for the colonization with arbuscular mycorrhiza fungi can be very useful for studying mycorrhizal associations, not only for breeding programs which rely on high-throughput screenings, but also for basic research into fundamental questions about the information transferred from plant-to-plant through fungal networks."

Phosphate is a major component of fertilizers and therefore indispensable for agriculture and food production. However, phosphate deposits are limited and are often located in areas of conflict.

Experts are already talking about a pending shortage of phosphate and thus fertilizers which could lead to a global food crisis. The new screening method could help breed plants that are more able to negotiate favorable relationships with mycorrhizal fungi so as to acquire phosphate more efficiently.

In a further step, the researchers want to elucidate the role of blumenol accumulation elicited by fungal colonization and find out whether blumenols may also function as signal molecules between plant roots and leaves. They also plan to use the new method to investigate fundamental questions concerning the communication between different plants of the same species and plants of different species over a joint fungal network.

Value of Chloride as a Topdressing for Winter Wheat