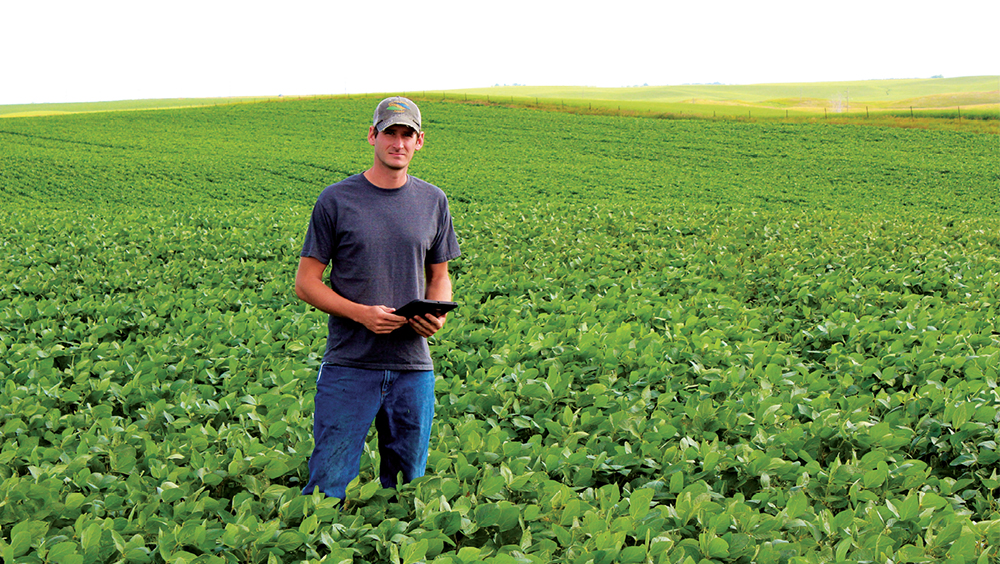 Pictured Above: DIGGING FOR IMPROVEMENT. Soil and tissue testing have helped Chad Rubbelke identify nutrient deficiencies to help him tweak his inputs and maximize yields. Recently, they started applying molybdenum to soybeans to improve nodulation and yield, both of which can suffer in their slightly high pH soils

I was born into no-till, you could say. It’s really all I’ve ever known. My grandfather was a big proponent for the environment and was an advocate when my Dad pushed for reducing tillage on our farm in the early 1990s.

We’re on the edge of the Prairie Pothole region right on the continental divide just southwest of Minot, N. D. Our farm is hilly, and we have a mixed bag of soils. On the hilltops, we’ve eroded clay soils that transition to heavy clays in the bottoms, and everything in between.

Our climate is fairly dry. However, the farm is situated at a slightly higher elevation than the surrounding area, which keeps our temperatures a bit cooler than the rest of the region. We raise canola, soybeans, durum and hard wheat currently, but have raised a wide array of crops in the past, including sunflowers and flax.

The number of crops we grow has dwindled a bit as some of the specialty markets we were growing for have backed off, especially for high-oleic crops. We still grow premium crops like durum to hit those higher price points. Quality, yield and profitability are all targets on our farm. No-till protects our highly…

Premium content is for our Digital-only and Premium subscribers. A Print-only subscription doesn't qualify. Please purchase/upgrade a subscription with the Digital product to get access to all No-Till Farmer content and archives online. Learn more about the different versions and what is included.
KEYWORDS canola durum flax Greenstar John Deere drill John Deere sprayer limate FieldView Prairie Pothole sunflower Wheat