The soybean cyst nematode (SCN) is a major pathogen of soybean in Iowa and throughout the Midwest. Damage often goes unrecognized until lower-than-expected yields are harvested because above-ground symptoms may not be obvious, especially when adequate or excess rainfall occurs during the season, says Greg Tylka.

A key way to check fields for this pest is to dig soybean roots and look for the small, round, white adult SCN females. It typically takes 5 to 6 weeks or more after planting for the first SCN females of the growing season to develop and appear on roots, says the Iowa State University plant pathologist.

Soybean plants from two fields in central Iowa were brought to Iowa State University on June 5. Numerous adult SCN females were observed on the roots (see figure). The soybeans were planted on May 10.

The appearance of SCN females on soybean roots just 26 days after planting is as early as I have seen. The rapid development of SCN females likely is due to the very warm temperatures that occurred in Iowa in May. 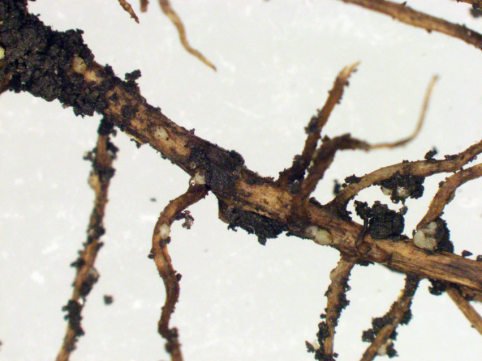 Adult soybean cyst nematode (SCN) females on soybean roots collected on June 5, 2018, from a field in central Iowa that was planted on May 10, 2018. There are more than a dozen SCN females (cream-colored objects) on the roots shown in this image.

Rapid Development May Lead to Large Increases in SCN Numbers

Soybean Resistance to SCN is Fading

Information on how well resistant soybean varieties control SCN numbers is available at www.isuscntrials.info. Also, more information about the biology and management of SCN is available at  www.soybeancyst.info, www.soybeanresearchinfo.com/diseases/scn.html, and www.TheSCNCoalition.com.