Sunflower Rust May be Problematic in 2018 — Be Aware!

May 29, 2018 | Posted in Crop Protection
Source: University of Nebraska

Rust, caused by the fungal pathogen Puccinia helianthi, is not a disease that we see every year. However, if it occurs early in the season, it can pose severe disease problems for Nebraska’s sunflowers, particularly in irrigated fields. The rust pathogen has a very complex life cycle consisting of five distinct spore stages—all of which occur on sunflower, says Bob Harveson.

Likely the most familiar stage to consultants and producers is the uredial, says the plant pathologist. This stage is also the most damaging to the crop, and is characterized by reddish-brown, cinnamon-colored pustules (uredia) containing thousands of spores (urediospores) (Figure 1, left).

These rust-colored spores—the origin of the disease name—generally develop in mid- to late summer. This stage of the cycle is also called the “repeating stage” because these spores can repeatedly infect new leaves and plants throughout the season. In the past, infections in Nebraska have often occurred late enough in the growing season that treatment was unnecessary.

Environmental conditions favoring infection and disease development by the urediospore (repeating) stage include a minimum of two to three hours of leaf wetness and temperatures ranging from 55°-85° F. Additional infections from these spores can occur every 7-14 days if temperatures remain above 75°F for extended periods. As temperatures cool in the fall (below 50°F), these spores are converted to dark, two-celled teliospores (Figure 1, right) which serve as the overwintering stage of the fungus.

In early spring, teliospores germinate to produce basidiospores, which then infect sunflower seedlings. The basidiospore infections give rise sequentially to the pycnial and aecial spore stages (Figure 2). The aeciospores, formed in developing aecia, then re-infect sunflowers to create new uredia and urediospores, completing the life cycle. Disease will not occur if the pathogen does not complete this cycle. 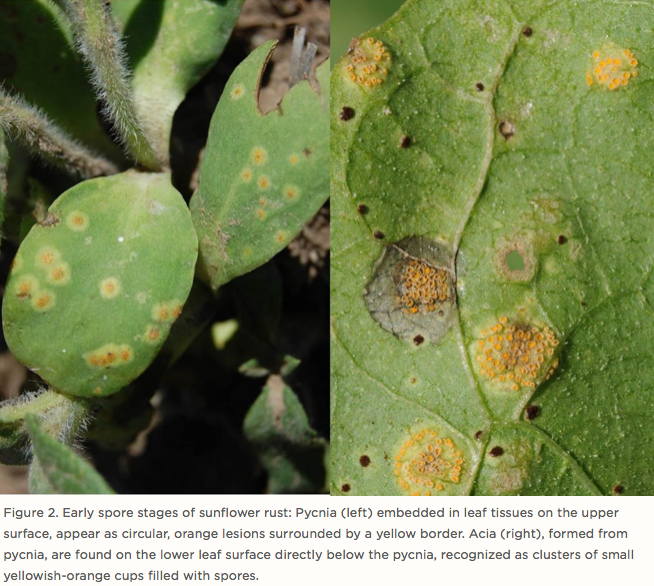 Within the last week, I have identified the pycnial spore stages on volunteer sunflowers in research plots at the Panhandle REC. These plots were planted to sunflowers in 2017. Pycnia are found embedded in leaf tissues on the upper surface and appear as circular, orange lesions surrounded by a yellow border (Figure 2, left). The flask-shaped pycnia then form aecia, which are found on the lower leaf surface directly below the pycnia (Figure 3). The aecia are recognized as clusters of small yellowish-orange cups filled with spores (Figure 2, right). 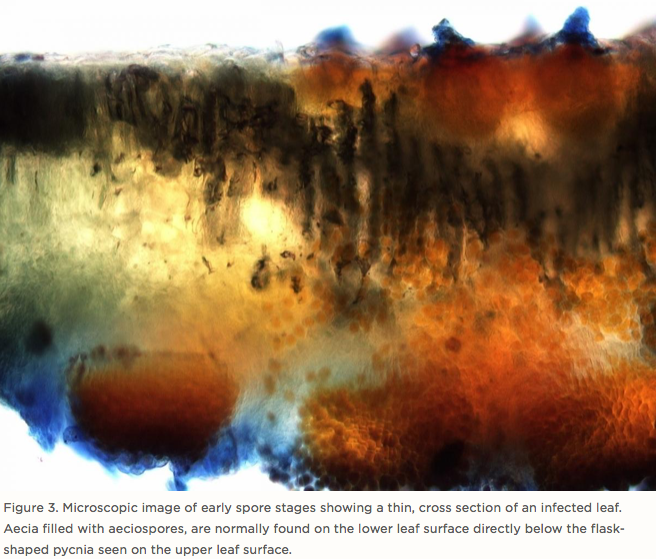 The appearance of the pycnial and aecial spore stages this early in the season is apparently very rare; however, similar observations were noted in late May 2009. Sunflower production throughout western Nebraska that year was severely damaged by high levels of rust. The environmental conditions that spring were similar to those the past several months—cool and very wet. The sightings from 2018 are actually about two weeks earlier than in 2009, thus the conditions are conducive for disease to occur.

This suggests that economically damaging epidemics are more likely to occur due to the early production of inoculum. In order to reduce the potential for severe, early infections, it is important that volunteer and wild sunflowers be destroyed to break the disease cycle before the repeating (uredial) stage is formed, particularly if the 2018 crop is to be planted near sunflower fields from 2017. The greatest yield reduction potential occurs when younger plants become infected. Early infections allow more time for secondary and tertiary infections to occur during the season, provided cool, wet weather persists. If infection can be delayed until after bloom, damage to the crop will be greatly lessened.

Nebraska sunflower producers generally are not accustomed to thinking about sunflower rust before August; however, this year it may be necessary to scout earlier than normal and be prepared to treat with fungicides to reduce crop damage. In 2009, disease from the uredial stage (Figure 1, left) was observed on plants in early July and fungicide applications were required.

In a situation like this, monitoring fields should begin within several weeks after emergence. Fortunately, fungicides are very effective against this disease, given they are not applied too late. As a rule of thumb, uredial infections appearing on the upper two to three leaves closest to the head prior to petal drop will economically justify fungicide applications. We have conducted field studies and determined that the optimal time for applying fungicides, if necessary, is at or before the early flowering stages (F4-F5.5).

A number of fungicides are registered for use on sunflower for rust control, including Aproach, Priaxor and Quadris.

Powdery Mildew: Disease Concern to be Aware of in Field Peas

Fertilizer 'Bargains' May Be On Horizon