The soybean cyst nematode (SCN) is capable of causing serious yield loss in soybeans every year and is widespread throughout Iowa and much of the Midwest. In the “good ole days,” a farmer was “good to go” with SCN management, if he or she knew what fields were infested with the nematode, and then grew SCN-resistant soybean varieties in rotation with the non-host crop corn. Nowadays, though, things are a little more complicated.

The fact is, your SCN numbers may be building up unbeknownst to you. This buildup can go unrecognized because a soybean crop often does not appear stressed above ground, even though SCN numbers are building up below ground and yield loss is occurring.

What Causes Buildup in SCN Numbers?

Also, full SCN resistance in soybean requires multiple genes from the breeding line that is used to develop the variety (such as PI 88788 or Peking). Not all varieties on the market described as SCN resistant possess all of the available resistance genes, a condition which leads to less than full nematode control. Iowa State University tests the nematode control and agronomic performance of many SCN-resistant soybean varieties in experiments conducted throughout Iowa each year.

The results of the work, funded by the soybean checkoff through the Iowa Soybean Association, are posted online at www.isuscntrials.info. A hard copy report of the results of the 2016 experiments will be mailed as a special insert in the Jan. 14, 2017, issue of the Iowa Farmer Today.

An inadvertent buildup in SCN numbers also can occur by growing SCN-resistant soybean varieties with the same source of resistance repeatedly in the same field, causing a shift in (or selection for) the SCN population with increased ability to reproduce on the source of resistance. The increased reproduction of SCN populations in Iowa fields is a real problem because almost all SCN-resistant soybean varieties available to Iowa farmers contain resistance genes from one breeding line, PI 88788.

How Would You Know if Your SCN Numbers are Building Up? 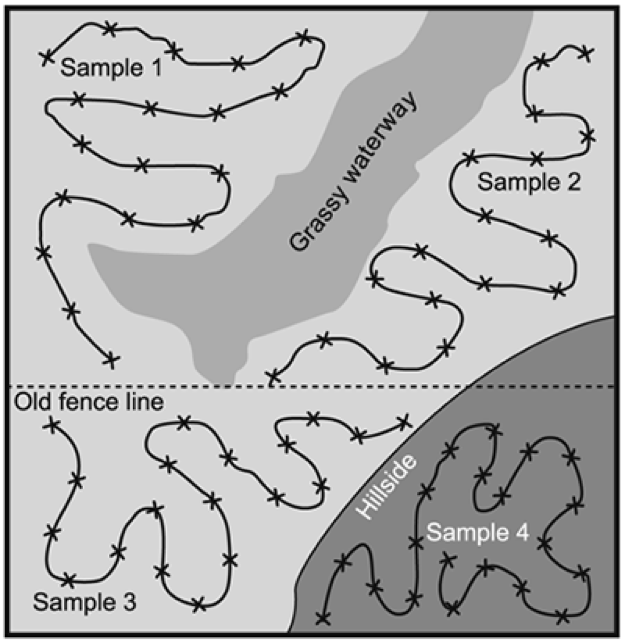 Figure 1. Example sampling pattern for collecting soil samples for SCN in different management zones in a field.
The only way to know the status of the SCN infestation in a field is to collect a soil sample and have it tested. Specifically, farmers should collect soil samples to determine their SCN numbers before every third soybean crop.

Collecting soil samples to check for SCN and to determine its numbers is not difficult. And this fall is a great time to sample fields in which soybeans will be grown in 2017. A few simple guidelines to follow are:

Testing for Increased Reproduction of SCN on Resistant Varieties

If SCN numbers are unexpectedly high and yields of SCN-resistant soybean varieties have started to decline for no apparent reason, it might be worth having something called an HG type test (HG stands for Heterodera glycines, the scientific name for soybean cyst nematode) conducted on a sample from the field to determine if the SCN population in the field has developed increased reproduction on soybean varieties with the PI 88788 and the other sources of resistance. Consult the ISU Plant and Insect Diagnostic Clinic at 515-294-0581 or pidc@iastate.edu for instructions on how to collect and submit a sample for HG type testing.

More information about the biology and management of SCN is available at www.soybeancyst.info and soybeanresearchinfo.com. Iowa State University’s management recommendations for SCN are available online in a downloadable format, Soybean Cyst Nematode (SCN) Management Recommendations, IPM 63.