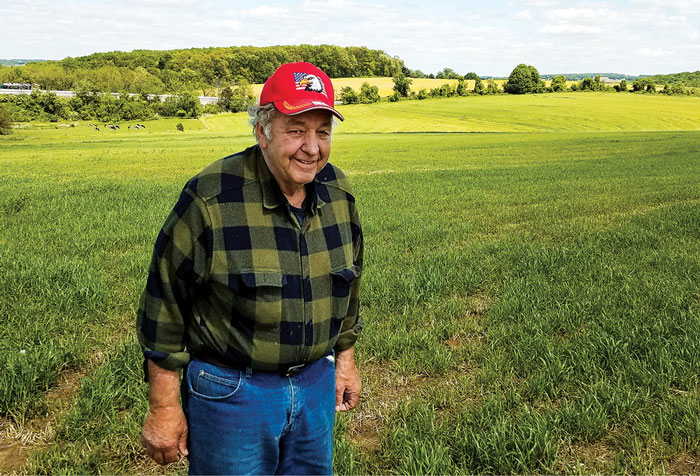 Pictured Above: ORGANIC MATTER MASTER. Seven Valleys, Pa., no-tiller Leroy Bupp has made it his focus to raise organic matter levels over the last 30 years. Using a combination of techniques, including long-term cover cropping, planting green and spreading manure, he’s seen a large boost. An average across 150 soil samples pulled from all 700 acres of his farm over the past 4 years show that his organic matter has risen from 2-4.8%

An ancestor of the Leroy Bupp’s family likely started farming the land in Seven Valleys, Pa. Bupp currently farms on acres that were originally farmed around the time the 13 colonies declared independence from Britain. Of course, much has changed over the years.

Bupp says when farmers in the “new world” first started cutting their plots into the pristine, virgin forest and prairie lands, the soil’s organic matter content was probably around 10%. Over 2½ centuries of farming, especially in the last century with large-scale, full-width tillage, much of the country’s soil organic matter level has languished around 2% and below.

His family’s farm was no different. But Bupp has spent the past 30 years concentrating specifically on restoring organic matter to the soil. Through a combination of long-term no-tilling, cover cropping, planting green and spreading manure, he feels he is well on his way to restoring the land.

An average across 150 soil samples pulled from all 700 acres of his farm over the past 4 years show that his organic matter has risen to 4.8%.

Premium content is for our Digital-only and Premium subscribers. A Print-only subscription doesn't qualify. Please purchase/upgrade a subscription with the Digital product to get access to all No-Till Farmer content and archives online. Learn more about the different versions and what is included.
KEYWORDS leroy bupp Night Crawlers Plowman's Folly white corn planter Yetter SharkTooth

Organic Matter: The Lifeline of Soil

Shoot for Higher Organic Matter by Relying on Residue