It’s imperative for no-tillers looking to graze cover crops to think about individual goals and resources, soil types and other variables when choosing what species to plant, says Jim Johnson. What worked for one grower may not for someone 300 miles away, says the soils and crops consultant for the Samuel R. Noble Foundation.

Cover crop grazing isn’t one-size-fits-all, particularly in a dryland no-tilling situation, and it’s not something to be entered into without study.

But with some thorough planning and on-farm testing to find multi-species mixes suited to local climates and soils, mixed cover crops can do double duty, says Jim Johnson.

Grazing cover crops is a way to turn them from an expense into a profit center, Johnson says. In addition, properly executed grazing on top of cover cropping will speed up the rate of soil health improvement.

For example, Leedey, Okla., no-tiller Jimmy Emmons and Waverly, Kan., no-tiller Darin Williams have reported typical cattle gains of 2-2½ pounds per day in the summer from grazing multi-species cover crops that both build soils and serve as grazing fodder.

But such results won’t come to pass if planting and grazing management doesn’t follow principles of soil health. Johnson says producers contemplating grazing a cover crop must think about why they want to pursue the practice.

“Do you want to add livestock to your system, or do you already have livestock and need feed for them? Do you need to add diversity? Just about every cover crop that I put in is going to be grazed because I’m thinking about the benefits that livestock bring to the ecological system,” Johnson says.

Cover crop grazing opportunity varies widely, Johnson points out, dependent on climate, crop rotations, when and how covers are planted, and the intervals between cash crops when grazing covers could be used.

Changing farm policy is opening the door to more cover grazing, since insurance and other programs no longer consider covers a crop. That policy change allows producers to begin using covers when they couldn’t before.

Herbicides used in prior farming may be among foremost challenges in getting started.

“Think about what previous herbicide is out there, what is its lifetime, what is it going to do to things that I might be looking at putting into a cover crop — particularly if I’m looking at a diverse mix, and what are grazing restrictions?” he says.

“Some herbicide labels call for not planting anything other than the listed crop for intervals of 12, 14 or 16 months, so if you’re looking at planting a cover crop you have to go back that far, maybe even farther for some things.” 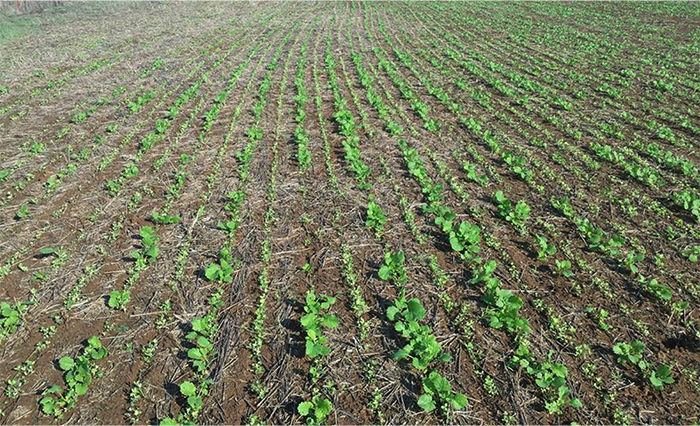 Whether it’s a box drill, air drill, broadcast spreader or planter, no-tillers seeking to graze livestock on cover crops have important equipment decisions to make — not only to seed covers but also to work through the residue when planting cash crops, Johnson says. Above, an air drill was used to seed clover and canola in alternating rows.

Many critics say utilizing cover crop mixes in semi-arid climates for soil improvement or even for grazing will use up water needed for a future cash crop. Johnson acknowledges that in southern Oklahoma and the High and Rolling Plains of Texas there is less rain than most of the Midwest and more evaporation.

“The difference between rainfall and evaporation is key — we have 100 inches of evaporation and our deficit is much bigger to overcome,” he says. “We worry about water — it’s the most limiting factor in our part of the world.

A cover crop is going to use up moisture. You’re not going to grow a cover crop on no moisture. But what we think we’ve seen is that when it does rain, you recharge that profile faster and deeper because you’ve got better soil structure and more pores.

“Through the next cropping season, you can overcome that deficit from the cover crop, unless the next season brings a deep drought. Is future crop yield better or worse? Over a 10-year average, you’re going to have better future crop yields behind cover crops than without them—long-term, that yield advantage is going to be there.”

Weed control options in cover crops for grazing can be limited. Advance planning is crucial, and cover plantings must be managed as a crop to be successful.

Johnson says bringing livestock into the cover crop picture involves numerous infrastructure needs. Water quantity and quality must be sufficient, and fencing is necessary to control animals. Johnson suggests that grazing management should be considered when planning fencing, along with what kind of fence to use and resources to be poured into it.

“You’ve got to think how water supply and quality matches the cover crop and potentially, other feed supplementing livestock. You could be creating an issue for yourself if you don’t take the cover crops, the supplement, the water, and the quality of each of those into consideration,” says Johnson.

“Some of the things that we might put in a cover crop are going to work better in clay soils and some will work a whole lot better in sandy soils than others,” he says. “How much variability is in your soil? Do you go from sand to clay in one field? Or is it the same from end to end and corner to corner?”

Growers new to seeding covers must consider if their equipment can handle planting into cash-crop residue, and planting a cash crop into cover residue.

Deciding what to plant in a cover mix can impact overall success. Cover crops keep the soil protected from heat, cold and rain so that it stores moisture. Not everything in the cover mix should be considered livestock fodder, as some of the plants are there to feed the soil.

“If we’re going to plant cover to graze, is it palatable? Flax is a great cover crop, but livestock won’t eat it,” Johnson notes. “Regardless of how good a cover crop species or variety is, if it’s not priced at an economical rate for your use, it doesn’t matter.

“Do you want warm- or cool-season plants, or both? Think about the height of the cover crop. The only way to tell what’s adapted on your farm is to try it on some acres. Ultimately, it doesn’t matter how great it grows and how economically you can get it planted if the livestock aren’t going to eat it. You may want to include some plants livestock don’t eat because one of your goals may be to leave residue.”

Bloat and prussic acid can be risks with some cover crops, and brassicas can have high sulfur, and that becomes a factor depending on water quality.

“Okra is one of my new favorites,” Johnson says. “Cows love okra. They eat the whole plant to the ground, and if you have a little moisture in the soil it will come right back and the cattle graze it to the ground again.

“With rain, it will come back and they’ll graze it to the ground once again. Okra has probably the best taproot I can think of. If you need to do some tillage you should be looking at okra instead of steel or metal machinery.”

Johnson says getting the most from grazing cover crops ultimately comes down to individual goals, resources, species selection, what producers want to do and why, and management of all of the above.

“I have worked with several producers who found that one of the big benefits of grazing cover crops is forage to take advantage of,” he says. “Oklahoma is a wheat state. In June/July/August we can get off native grass and perennial warm-season pastures, rest them, and graze these cover crops

“Producers have told me cover crops have kept them in business the past several years and allowed them to manage native pastures. What we see with a healthy no-till system and a healthy rotation including grazed cover crops is we build soil structure, and we don’t get hoof pugging in the ground any more—it usually occurs only in the transition phase.”

Finding a Weed Control Plan that Won’t Hurt Your Covers

Cover Crop Learning on Your Doorstep