No-till on the Plains

June 21, 2017 | Posted in Cover Crops, Soil Health
Greg Scott of Tryon, Okla., is 40-year career soil scientist who changed his mindset about caring for the soil. He and his wife, Becky, have a cow-calf herd that graze on warm- and cool-season grasses, forbs, and legumes thanks to the Scott's soil restoration efforts.

Greg Scott had one of those ‘Ah-ha’ moments about soil health while he was stuck in a 9-foot deep hole near Stillwater, Okla.

A storm popped up while a group of scientists were sampling soil. The lightning was intense and shelter was too far, so he and a co-worker hunkered down in the backhoe pit they’d dug, Scott says.

“Seeing that taught me a lot about what a healthy soil looks and acts like. It confirmed my belief in no till and cover crop methods,” Scott says. “Soil tends to be a self-optimizing system, where the plants and animals that live in it soil make an environment that is healthy for them. I’ve had lots of ‘Ah-ha’ moments but that was definitely one of them.”

Scott, who is from Tryon, Okla., has been in many holes during his career as a soil scientist. For more than 40 years he’s worked to help growers learn more about moisture, plants and biology of the Earth. As he worked, Scott found the original concepts he learned regarding care for the soil were flawed. It was time to take another step forward.

Caring for Their Own Soil

Scott and his wife, Becky, currently work together on a 150-acre ranch in Lincoln County. They manage 20 cows on a perennial grass pasture that they’ve been slowly working to restore.

Scott says his area has suffered from severe erosion that started during the Oklahoma Land Run in 1889 and continued until the end of the 20th century.

As a youth, Scott’s family moved away from their farm in southeastern Oklahoma during the Great  Depression, so Scott grew up in the city. When he graduated high school he told his Dad he wanted to study agronomy and soil science at an ag school that was far from the city.

“My dad said, ‘You were moving either way,” Scott says. “I went to work for a retired soil scientist and thought it was pretty interesting. Then I was hired to work as a soil scientist in the soil survey for the Soil Conservation Service (SCS), later the NRCS from 1976 to 2013.”

Scott moved on to serve as a consulting soil scientist in northwestern Oklahoma, then finished his career at Stillwater, Okla., as the state soil scientist for NRCS.

After working with a variety of soil types in numerous states, he and Becky wanted to start a farm of their own. The land they purchased in 2001 was a cotton farm suffering from about 2 feet of erosion on most acres. Scott says when they first began establishing warm- and cool-season grasses, forbs and legumes, they noticed how fast their soil began to change.

“Our long-term goal is to develop perennial pastures that have high diversity between warm- and cool-season crops,” Scott says. “We will never get back to native vegetation, but we think we can practice year-round grazing and reduce dependence on the hay we sprigged to Midland 99 Bermuda grass in 2005.”

Since nitrogen is expensive, the Scotts plant a cover crop of arrowleaf clover, vetch and alfalfa into the mix then they overseed with cereal rye for fall grazing and management of weeds like marestail. Scott is also adding eastern gamagrass and plantain into the landscape. He wants a production system that doesn’t rely on inputs and is sustainable.

“Every pasture on our farm is in some state of being diversified,” he says. “The cattle are being grazed in a rotation that’s not heavy enough to call mob grazing, but we want to increase grazing intensity and do daily pasture moves. It’s all a work in progress.” 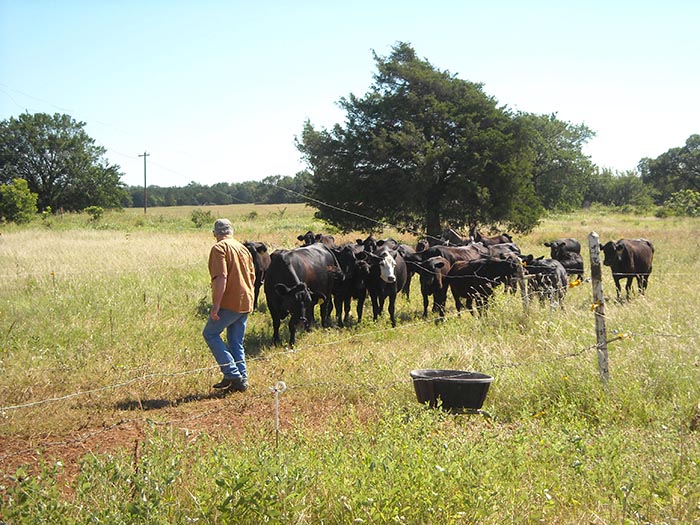 Rancher Greg Scott discovered the importance of soil biology over a 40-year soil science career. His cows graze on a cover crop mix of arrowleaf clover, vetch and alfalfa in the spring then he overseeds with cereal rye for fall grazing and management of weeds like marestail. Scott will add eastern gamagrass and plantain into that landscape in the coming year.

What He Didn’t Know Did Hurt Him

Scott was educated traditionally as a soil scientist, which means he studied geology, chemistry, physical properties and classification of soils as opposed to soil biology.

So for nearly 40 years, he put bits and pieces of the soil health puzzle together on his own. During his time mapping soils Scott noticed the importance of soil biology, and others around him also began to realize most agriculture landscapes are starved for carbon.

“Carbon is what runs all life on the planet,” Scott says. “You’re either living it or you’re dead carbon. Traditional ag systems are built around the continuous loss of carbon in soil and the loss of life that relied on the residue from the plants. It became evident to me that bacteria and fungi in our ecosystem really are a function of the soil and the function of the plants we care about. They run on carbon.”

In 2013, Scott left his full-time gig with NRCS and began working as a soil science consultant for individual farmers, as well as part-time work for the Oklahoma Conservation Commission and as a salesman for Green Cover Seed. Scott’s daily goal now, he says, is to build a flexible soil system for every farmer.

In recent years, Scott has been working in rangelands that are intact with incredible growth and production. In Oklahoma, he says, the variety of native legumes are scattered in a well-distributed way throughout the range. This fuels the system.

“The intact rangeland systems have a lot of active carbon, good soil structure and lots of earthworms that can move air and water in and out of the soil with pretty high respiration rates,” Scott says. “All of the life of that underground ecosystem is what is missing from cropland. Soil health has really given us a platform to understand we can restore that ecosystem in land that is highly degraded.”

Scott says he sees a difference in the health of the pasture vegetation and the way the cattle utilize it, even when he’s only moved cattle 4-7 days at a time. He and Becky have had to invest in water lines and adding water points and tanks, as well as building electric fence but they consider it more of an investment than an expense.

Putting New Knowledge into the Soil

Scott put no-till methods in place on his farm in 2004 then became involved with soil health groups like No-till on the Plains.

He currently serves on the board of directors for No-till on the Plains, a position he’s held since 2012. Bringing soil back to life is part of Scott’s daily mission because he has participated in the soil conservation movement and now, the soil restoration movement, he says. On his farm, Scott plans to use cattle as a more intensive tool to recover pasture.

“I have the belief now that it will happen,” he says. “I’ve seen such dramatic results in ways that I, as a soil scientist, couldn’t anticipate. When our cows are in a paddock for 4 or 5 days, we move them, and within 60-days that paddock is ready for them again.

“I believe the ecosystem will respond that quickly to that kind of change in management. It takes some time to put up fences but mostly it’s a challenge to believe it will work. It is really a pleasant surprise that it does make difference.”

Scott says moving to no-till practices is a huge leap from an agriculture system that relies on monocultures, chemicals, herbicides and artificial fertility. People will make that kind of change when they see their neighbor being successful, he says.

Scott notes that the rain that gets into the soil gives him the opportunity to grow a crop, make a yield, feed his stream, and recharge his aquifer.  Water that runs off is a loss to me the producer and to society as a flood event.

“I’ve seen it work now too often not to make this move,” Scott says. “I can see the ecosystem really is important and all parts are connected. I didn’t have a clue at first. It’s taken me 30 years to get ready to learn what I’ve learned in the last 10.”