No-Till on the Plains

For the past 3 years, a group of eight Nebraskans has gathered around each other’s kitchen tables to discuss soil health and what steps are needed to improve it.

By Rhonda McCurry, Writer for No-till on the Plains

For the past 3 years, a group of eight Nebraskans have gathered around each other’s kitchen tables to discuss soil health.

The peer group is comprised of producers ranging from central to southeastern Nebraska. By periodically involving the NRCS, No-till on the Plains Winter Conference, sponsoring field days and other resources, they seek to learn and share.

Mike McDonald, Palmyra, Neb. says the group brings a different focus each time it meets on how to help each other. The participants focus on value-added steps to increase diversity in rotations and cover crop intensity.

“For example, one person in the group raised 6,000 bushels of cereal rye,” McDonald says. “Together, we cleaned it and, in a cost-efficient manner, were able to increase the drilling rates.”

Increasingly the group discusses how to integrate and manage livestock on cover crops. The group seeks better gains in the microbial and carbons on the farms through atypical grazing periods. Additionally, they believe water infiltration is increasing, which ties to cover crops, penetrating roots and root exudates. 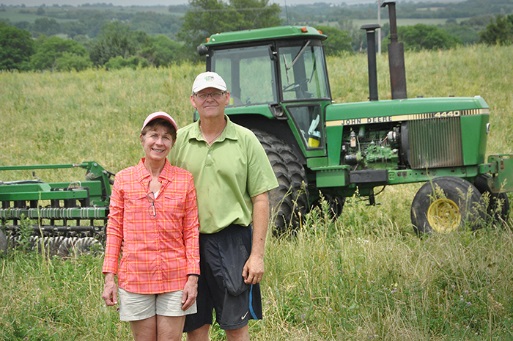 Mike and Janet McDonald have been working hard to improve soil health on their Nebraska farm, integrating cover crops and paddock grazing livestock

McDonald’s father was a traditional grower who, at first, did not worry about overusing ground water. But when the family moved to southwestern Nebraska, McDonald saw firsthand how the Ogallala aquifer was not a finite resource, and how the role of water and importance of regenerative agriculture practices became increasingly paramount.

McDonald’s career path includes teaching and preparing educators at the university level, as well as farming part-time. Through research on rural education, he visited the Dakota Lakes Research Farm on a bus trip organized by Paul Jasa, extension research engineer, University of Nebraska-Lincoln. After the trip, McDonald and his wife, Janet, decided to take intense steps toward improving soil health on their farm.

“I wanted farmers to do things to invest in the land and ‘walk the walk,’” he says. “I began to help producers with education and found there was a niche.”

A recent “ah-ha” moment came after drilling rotational grazing forage — spring, summer and fall. Now, after McDonald’s third year of paddock-grazing cows, he says he sees so many clovers growing that the growth of oats has been challenged.

In addition, spring barley has grown, which is a cover crop he is excited to try again this spring. McDonald says he also has 41 bee hives that have increased production through continuous clovers and nectaries. This, he says, supports the value-added steps and cover crops.

“Soybeans had failed the previous year because of adverse conditions, so I drilled a warm-season mixture into it,” McDonald says. “It did excellent and we paddock grazed the cows. Then in the fall we drilled barley into it. I had a decent stand but it was a really bad winter. So we came back with a spring crop and planted oats, but clover from an earlier mixture took off.”

This solidified his decision not to get rid of clover but to manage it instead. With a mild spring in 2016 McDonald had more grasses than he could imagine so he chose to paddock graze those areas, putting 40 head of livestock — on loan from a peer group member — on a 20-acre site for one month. Then he backed down to 21 head from mid-June to mid-October 2016.

McDonald says there are several reasons to utilize livestock on a no-till crop rotation. Though managing livestock can be labor intensive, the manure from these ruminant animals helps “crank up” soil fungi and microbes. Livestock also serve as lawnmowers, which means less use of herbicides and increases natural nutrients and biological activity. 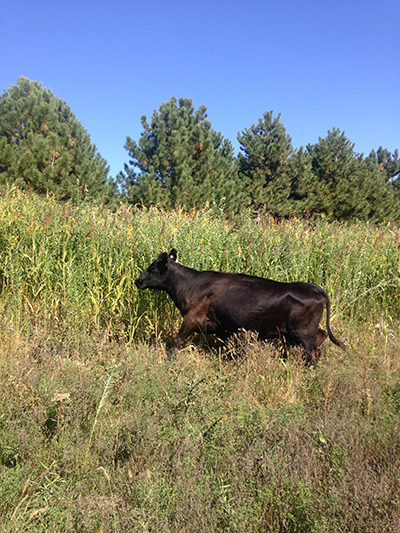 Although managing livestock can be labor intensive, the manure from these ruminant animals helps “crank up” soil fungi and microbes, says no-tiller Mike McDonald. Livestock also serve as lawnmowers, which means less use of herbicides and increases natural nutrients and biological activity.

There are a few caveats to utilizing hooves on cover crops, one being the knowledge that the rates of warm season forages could produce prussic acid and kill cattle. However, if there is enough diversity in the mixture of warm and cool season grasses then the stocking rate can be increased.

“We only had a light frost in November so we kept the cows on this pasture 3 more weeks, which was tremendous,” he says. “We used to think in terms of opposite grazing windows, but now we should think of how they can work together.”

McDonald says it’s also important to have income diversity, reduce inputs and to try not to use fertilizers and herbicides. When weeds develop that means diversity is lacking and it is also a sign of nutrient weakness, he says.

In the future, McDonald would like to continue to raise cover crops that have different grazing windows so he can market beef. He says utilizing livestock means planning backwards a bit, recognizing the maturity dates of cover crops before they go in. It’s good to have a plan that will allow for increased soil health through different grazing windows, McDonald says. Then, using herbicides might be a thing of the past.

“There is truly something unique about the art and science of getting your soil to develop and producing something that helps others,” McDonald says. “It’s not a noble gesture but it is the right step toward resiliency, which doesn’t happen overnight.”