Texas A&M AgriLife Research is conducting several studies on canola in both the Rolling Plains and High Plains regions as interest in the crop continues to grow.

Clark Neely, Texas A&M AgriLife Extension Service small grains and oilseed specialist in College Station, said interest in canola is growing as wheat producers look for a rotational crop that allows the use of herbicides to clean up grassy weeds in their fields.

“There are not many options to control grassy weeds in wheat,” Neely said. “But we have Roundup-ready canola, as well as Clearfield, which offer producers the option to use Roundup and Beyond in their fields when they plant canola in the rotation. In addition, there are sulfonylurea and imidazolinon carryover tolerant varieties that can easily follow wheat.”

“We know crop rotation is far superior to a monoculture system,” DeLaune said. “We see a nice benefit for wheat following canola. We’ve seen as much as a 10 to 15 percent increase in wheat production.”

“Ideally, you want to get canola into the ground six weeks before the first freeze; in this area that’s around Sept. 20,” he said. “But some no-till producers have had problems with winter kill.”

DeLaune said they have experimented with plant growth regulators to suppress fall growth. The objective is to keep it from getting too big and further elevating the growth point above the ground, which makes it more prone to winter kill. 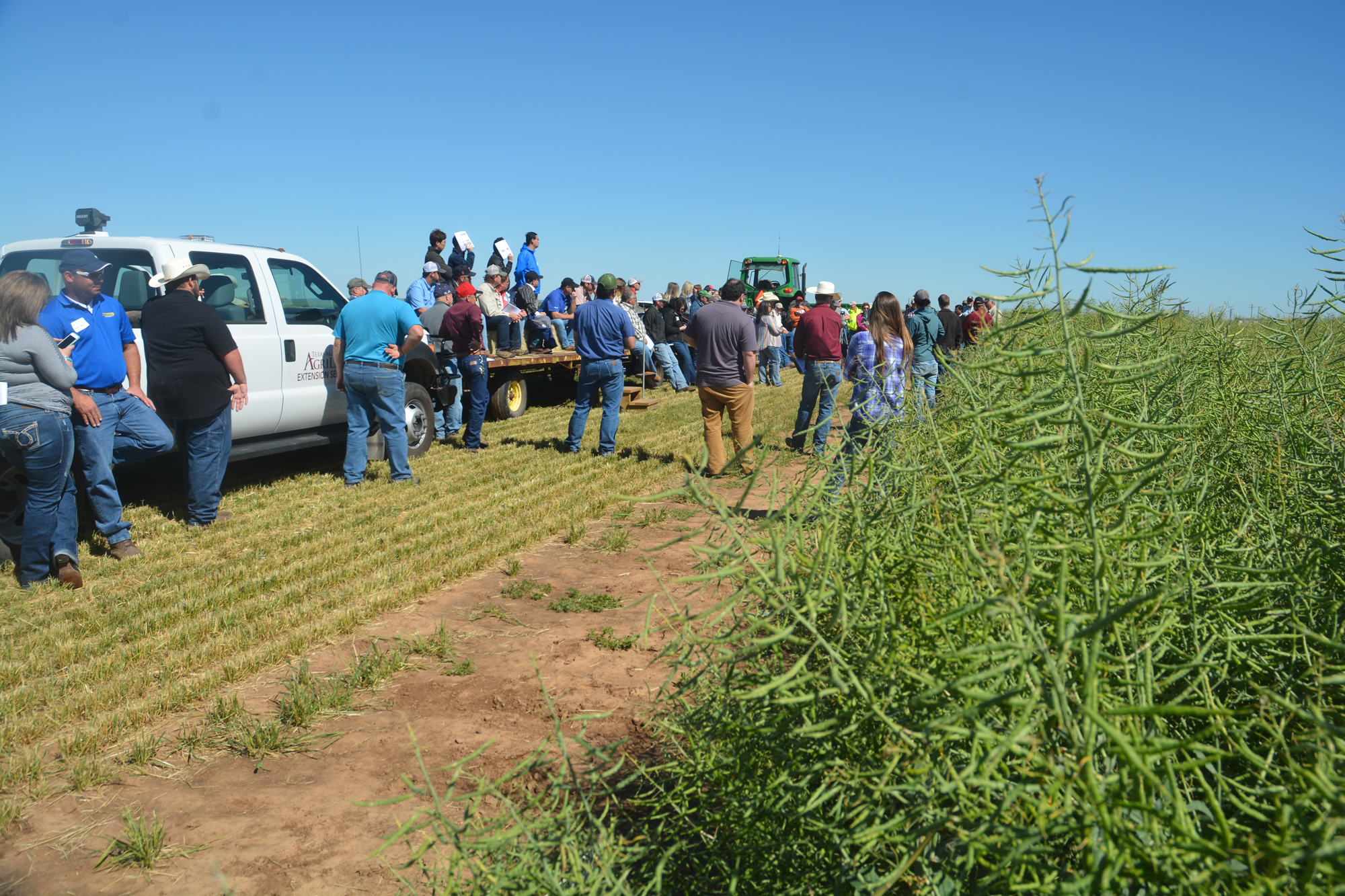 “We’ve done two years of studies looking at early planting dates – Sept. 8, Sept. 15 and Sept. 23 – applying growth regulators at the six-leaf stage,” he said. “What we’ve seen is no real effect of applying those chemicals on canola and winter kill.

“What we’ve found is planting date is more important. Planting at the optimal time is still providing the best yields.”

DeLaune said they planted some canola as late as Oct. 31, although the insurance cutoff is Oct. 10.

“For the last two years, we’ve been able to get away with that,” he said. “But the later you plant into October, the higher risk you have for winter kill. Ideally, you need to have it in the four- to six-leaf stage going into the first freeze.”

Jourdan Bell, the AgriLife Extension agronomist in Amarillo who is evaluating the winter canola production near Bushland, agreed the planting date will be key to successful production in the Panhandle region.

Bell’s plots include 12 different varieties at two different planting dates — Sept. 17 and Oct. 2 – on 30-inch rows at a seeding rate of 4 pounds per acre and a depth of three-quarters of an inch.

“Planting date is very critical for optimal crop establishment in the High Plains due to the potential for losing the crop to winter freeze,” she said.

Bell said at this time both planting dates look good at the Bushland site. The plots were not irrigated, but received about 9 inches of precipitation. Currently, plots are in pod fill and will be harvested mid-June.

Emi Kimura, AgriLife Extension agronomist in Vernon, said soil fertility plays a role in stand establishment. The pH level is important, because an acidic soil can cause a very scattered stand and inhibit root growth. Producers should also monitor sulfur and nitrate levels.

“At planting time, you need to make sure you do not apply too much nitrogen in the seed furrow, because the acidic condition will reduce your stand,” Kimura said.

“When you think about seed cost, it’s about $6 per pound, so that can add up when you start ranging the seeding rates,” he said.

Two popular methods of harvesting canola are swathing when 60 percent of the seed has gone through a color change or direct harvesting, which can have a larger risk due to leaving seed in the field for a longer period, DeLaune said. However, area producers use both approaches and there is not a consensus on the best harvest method from year to year.

He said according to the guidebooks, determining when to harvest is best done by looking at the pods on the main stem of a plant.

“Look at the pods beginning at the bottom of the main stem and ideally when you see a 50-60% seed color change in the pods on that main stem, then it is time to swath or desiccate it for harvest,” DeLaune said.

“There is a large difference in seed size,” he said. “The hybrid seed is half again as big as open pollinated seed, but can be more expensive, so you have to weigh your options on seed price. The hybrids are nice because the bigger seed might offer more risk management, providing more energy and hybrid vigor when planting into less-than-ideal conditions.”

Neely said winter hardiness is another trait of concern as wild temperature swings in the fall make that an important characteristic.

For a complete look at Texas canola variety trials and information, go to http://varietytesting.tamu.edu/oilseed/.