Why do some farmers graze their corn residue while others choose not to? That question was the crux of a University of Nebraska-Lincoln survey to learn more about farmer perspectives on the topic.

The online survey was distributed to 545 farmers in January and February 2015 using a mailing list developed by UNL Extension educators.

Of the 108 farmers who responded to the survey, 42 did not graze their corn residue. Of the 66 farmers with corn residue being grazed,

The majority of acres managed by survey participants were under no-till management; 67% of those who did not graze and 56% of those who did graze used no-till on 80% to 100% of their acres.  The majority of participants directly managed 200 to 4000 acres (40 farmers managed 200 to 999 acres and 35 managed 1,000 and 3,999 acres). Distribution of farm size appeared to be similar among farmers who grazed corn residue and farmers who did not.

The majority of farmers (approximately 93% of farmers who currently graze and 63% of those who do not graze) reported that they thought grazing corn residue either had no impact or improved the next year’s corn or soybean yields.

Reasons for Not Grazing Corn Residue

When non-grazers were asked why they did not graze their corn residue, 40% indicated that they felt grazing caused soil compaction. The perceived negative impact on their farming practices (no-till or ridge till) was selected by 33% of farmers not grazing corn residue.

However, 93% of those who currently graze their corn residue reported they did not have to change their tillage or planting practices as a result of allowing cattle to graze.

Not being able to provide water to the cattle was cited by 31% of the farmers as a reason they did not graze.  Seven farmers (17%) said they didn’t graze due to a lack of livestock in the area. 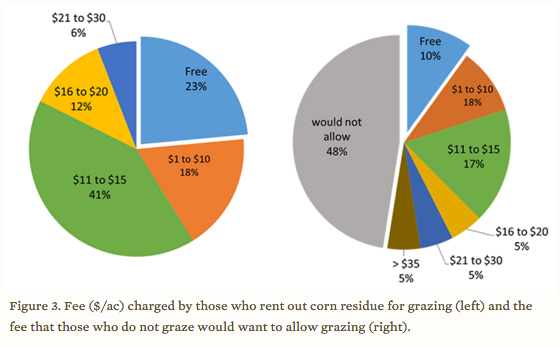