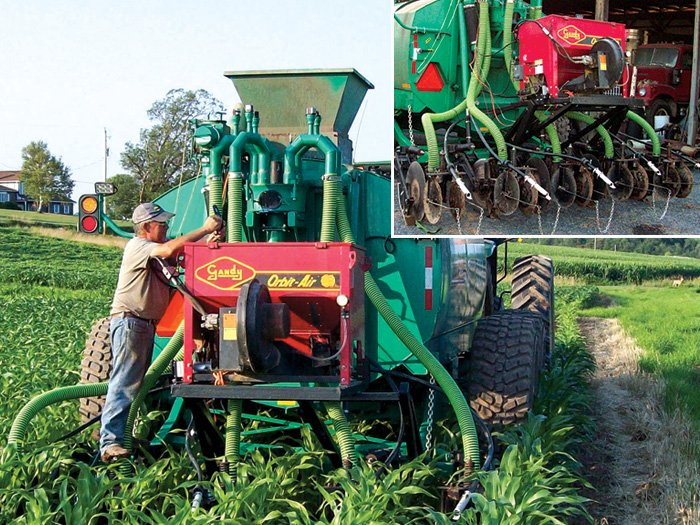 Above photo: TWO FOR ONE. Blain, Pa., no-tiller Virgil Gutshall Jr. checks on the machine that he and his father, Virgil Sr., invented that injects liquid hog manure into standing corn and seeds cover crops in the same pass.

A small family-owned hog operation in Pennsylvania is the mastermind behind a rig that sidedresses corn with liquid hog manure and seeds cover crops in one pass — possibly the first machine of its kind in the U.S.

Virgil Gutshall Sr. and his son, Virgil Jr., worked with two equipment dealerships to assemble the unit, which was tested first on their farm and also at the 2015 North American Manure Expo last July in Chambersburg, Pa. The Gutshalls no-till 250 acres of corn, soybeans, small grains and hay at Beaver Ridge Farm near Blain, Pa.

Gutshall Sr. says he was told by representatives of the Pennsylvania Department of Environmental Protection and State Conservation Commission that the unit had the lowest soil disturbance of all the machines demonstrated at the show.

The machine consists of a Houle 4,250-gallon tanker spreader with tire spacings set for 30-inch corn. The tanker is equipped with a Houle toolbar and five Yetter Avenger manure injectors for sidedressing hog manure in corn less than knee high.

A Gandy 6212 Orbit-Air seeder is mounted above the toolbar for seeding a cover crop between the 30-inch corn rows. The seed is broadcast between the corn rows and slightly covered, rather than being placed in a single row…