Data were collected at two locations per year in Iowa during 2013, 2014 and 2015. Plots were arranged in a randomized complete block design with four soybean varieties, three seed treatments, and eight replications per treatment (96 plots at each location; 6 location-years):

Data on the number of SBA per plant were collected weekly to estimate seasonal exposure, called cumulative aphid days (CAD). At planting and harvest, SCN eggs were sampled in each plot to assess SCN reproduction throughout the growing season. 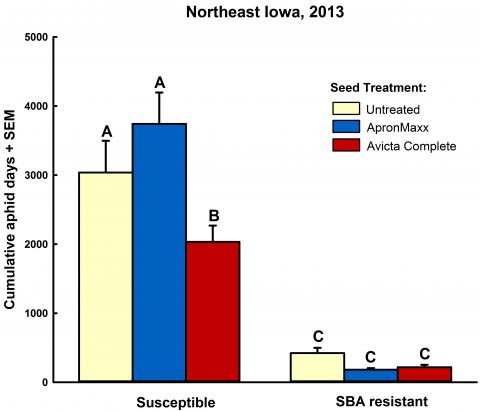 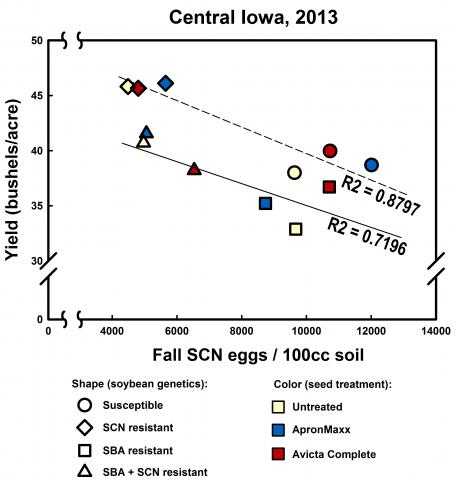 Typical reproduction factor for SCN over the summers was twice as much in SCN-susceptible fields compared to SCN-resistant fields. These results support previous research findings that host plant resistance is an effective pest suppression tactic. Varieties with SCN resistance typically had higher yields than SCN susceptible varieties. 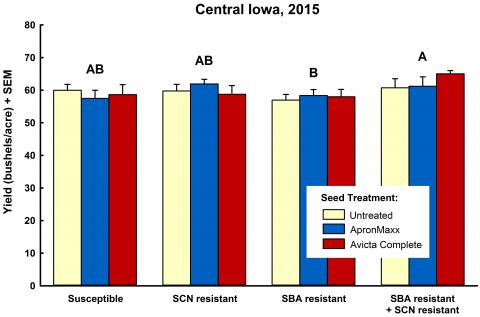 Seed treatments did not consistently improve yields compared to untreated seed (Fig. 3). There was one instance of a significant yield increase with Avicta Complete Beans, in northwest Iowa in 2014, but only on the SBA and SCN susceptible variety (Fig. 4). 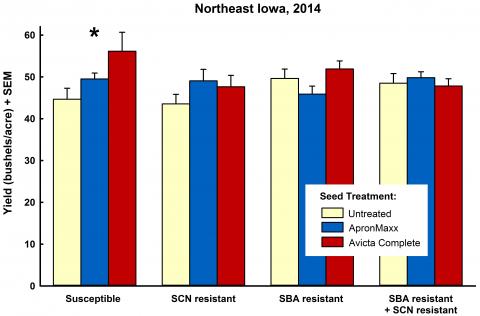 Figure 4. Seed treatments significantly improved yield only at one location-year and only for the susceptible soybean variety (note asterisk).

SCN resistance is an effective suppression tool and there are many options for SCN resistance in Iowa in various maturity groups. SBA resistance is an effective suppression tool that can reduce the reliance of foliar insecticides. Unfortunately, there are no SBA-resistant varieties with herbicide tolerance available in Iowa. In general, seed treatments did not significantly increase yield compared to untreated seed. These results complement data from the Yellow Books for Soybean Aphid. Based on our results, it is difficult to know or predict when use of these seed treatments will further preserve yield.