Northern corn leaf blight (NCLB), caused by the fungus Exserohilum turcicum, continues to increase in prevalence and severity in Ohio and across the corn belt. In 2015, it showed up much earlier than usual in several fields.

Weather conditions and current production practices are clearly two of the primary reasons why we are seeing more and more NCLB. The widespread use of conservation tillage favors the survival of the fungus from one year to another, and increasingly rainy, humid conditions favor spore production, dissemination, and disease development.

Infections typically occur when free water is present on the leaf surface for 6-18 hours and temperatures are between 65 F and 80 F. On susceptible hybrids, lesions develop within 7-12 days after infection, producing a new crop of spores that are easily splash- or wind-disseminated to new leaves and new plants.

Coupled with favorable weather, the use of susceptible hybrids and a possible shift in the race population of E. turcicum may also be responsible for the steady increase in NCLB. Several physiological races of the fungus are known to occur, including races 0, 1, 2, 12, 23, 23N and 123N. Of these, races 0 and 1 are the most frequently encountered.

Partial resistance is expressed as a reduction in the number and size of the lesions, and the amount of spores produced in these lesions, as well as an increase in the length of the incubation and latent periods (time taken for new lesions to develop and a new crop of spores to be produced). 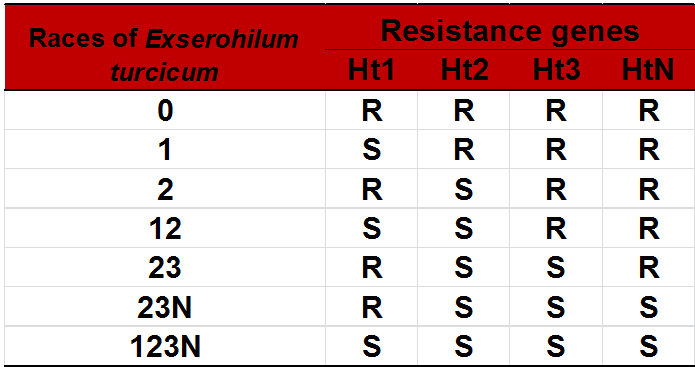 Race-specific resistance is controlled by one or more of four Ht genes, Ht1, Ht2, Ht3 and HtN. Resistance conferred by Ht1, Ht2 and Ht3 is expressed as small chlorotic lesions with limited sporulation, whereas resistance conferred by HtN is manifested as fewer lesions and longer latent periods, similar to what is observed with partial resistance. Hybrids with Ht1 are susceptible (S) to races 1, 12 and 123N of the fungus, but resistant (R) to races 0, 2, 23 and 23N. In other words, race 1 of the fungus causes susceptible lesions (large necrotic cigar-shaped lesions) on hybrids with Ht1, but resistant-type reactions on hybrids with Ht2, Ht3 or HtN.

Correspondingly, hybrids with Ht2 are resistant to races 0 and 1, but susceptible to races 2, 12, 23, 23N and 123N (note that 2 is present in all of these race designations). On one extreme of the race x Htgene interaction spectrum, hybrids with any of the four Ht genes will show a resistant response (small chlorotic lesions) to race 0, whereas on the other end of the spectrum, race 123N will produce a susceptible response on hybrids with any one or more of the four genes.

Field surveys conducted in Ohio during the 1980s and repeated again 20 years later (in 2003 and 2004) showed that races 0 and 1 of E. turcicum were the most prevalent in the state. Results from the 2003-04 study also showed that 35% of the hybrids planted during that time had effective Ht resistance against race 1, while 65% did not. In addition, the fact that typical cigar-shaped lesions (susceptible response) developed on all of the susceptible hybrids inoculated with race 1 suggested that the level of partial resistance in those hybrids was also low.

So if we assume that races 0 and 1 are still the most prevalent, the fact that we continue to see susceptible reactions on multiple hybrids at multiple locations across the state suggests that we are either planting hybrids without Ht genes (susceptible to races 0 and 1) or with Ht1 only (susceptible to race 1). However, without conducting another race survey and screening hybrids for resistance, we cannot entirely rule out the possibility of a race shift in the pathogen population. For instance, the widespread use of hybrids with the Ht2 or Ht3 genes (conferring resistance to races 0 and 1) could cause the frequency of races with virulence to these genes (i.e. capable of causing typical cigar-shaped lesions on Ht2 and Ht3 hybrids) to increase, rendering these hybrids susceptible to NCLB. This is called a race shift.

Weather conditions and our production system will likely continue to favor NCLB (and similar diseases), so unless we manage this disease by selecting hybrids with good resistance, it is only time before we have a major epidemic and suffer significant yield losses. We dodged the bullet in 2015 because conditions became dry in most areas shortly after pollination, but we may not be as lucky in 2016.