The Soil ‘Was Just Lifeless’

By Loretta Sorensen posted on November 11, 2015 | Posted in Soil Health

Chadron, Neb., no-till Larry Pahl is going at his own pace as he builds a diverse no-till system that is boosting soil organic matter and improving crop yields.

“That can never work.”

That was the first thought in Larry Pahl’s mind when he helped a young neighbor plant corn, wheat and millet in a no-till system.

The young man, who had completed an agronomy degree at the University of Nebraska before returning to the farm, was determined to eliminate all tillage. Pahl, who was hired on to help with planting, was all certain his neighbor was doomed to failure.

“I was sure the drill wouldn’t get seed into the soil, and that he’d have compaction issues and all kinds of problems by not using tillage,” Larry says. “In short, I found every reason in the world to expect this young guy’s crops to fail in a zero-till system.”

Larry watched his neighbor closely for about 2 years, noting the weeds, poor yield and other “lousy” results of the no-till. The third year, he realized that something had changed.

Instead of the expected 15- to 18-bushel-per-acre millet and wheat, the young neighbor was harvesting 30 bushel per acre — the same as Larry’s. But Larry’s inputs were higher and his neighbor was getting a crop off from every acre of his farm each year.

Larry’s farming system, which included fallow after wheat, only provided an annual crop from two-thirds of his 1,500 acres at best.

“At that point in my farming career, I was a little set in my ways. But after watching my neighbor’s results from no-till and viewing some North Dakota farmers’ no-till results during a no-till tour, I told my wife we have to start doing this,” he says.

Larry’s farming skills are rooted in his grandfather’s traditional tillage practices. After homesteading the farm in Nebraska’s Banner County, Larry’s grandfather disced and plowed the prairie to plant winter wheat in a fallow system.

Soils on that 600-acre farm on the edge of the Nebraska panhandle, some 80 miles east of Cheyenne, W.Y., are predominantly sandy loam. In a second farm close to the Colorado state line, Larry finds shallow, sandy/clay-type soils.

For some time, Larry’s father followed the family tilling tradition on the home place, transitioning into conservation tillage after a time.

“When my father graduated from the University of Nebraska, he had done some undergraduate work in soils,” Larry says. “Between what he’d learned and what soil conservation officers were saying then, Dad knew traditional tillage was destroying the soil. He and other farmers were looking for ways to stop using tillage at that time. That’s what led him to conservation tillage.”

During his own college and teaching career, Larry came to the farm every summer. After pursuing a teaching career for a number of years, he took over the farm. He moved from a from a wheat-fallow rotation into a more diverse rotation of wheat, corn, proso millet and fallow.

He stayed with that system until about 15 years ago. Recently, he added yellow peas to his rotation. 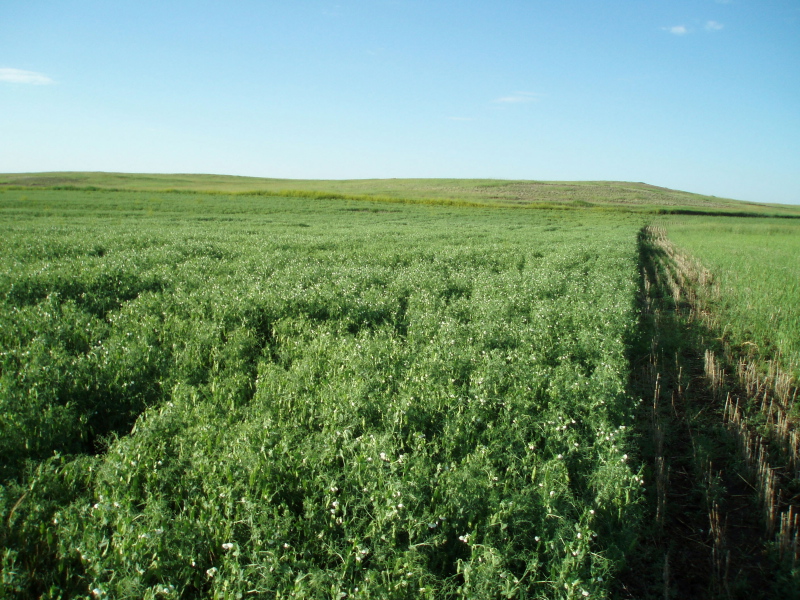 Yellow field peas have proven to be a good addition to Pahl’s rotation. Here the crop is shown in bloom toward mid-season.

Larry didn’t plan to reform the family farm when he took it over. But it didn’t take long for him to recognize that conventional-tillage practices were taking a serious toll on soil tilth.

“Most years, the soil was just like powder when we planted wheat,” Larry says. “If we didn’t get rain, the wheat wouldn’t sprout. But we needed rain just to help soil conditions, too. We couldn’t pack the soil to help reduce wind and rain erosion because it had no tilth. It was just lifeless.”

One other thing that came to Larry’s attention was that leaving millet stubble in the field over winter, and tilling it in spring to plant wheat, seemed to improve soil tilth. He started questioning the consequences of his tillage strategy and decided to move to a chemical fallow practice to reduce tillage and manage weeds with Roundup.

While he saw some benefit with chemical fallow, Larry knew soil quality was still unacceptable. Watching his neighbor’s no-till system evolve and succeed was the final push he needed.

Because he watched his neighbor struggle a couple of years with lower yields and higher weed pressure due to transitioning soils, Larry was undeterred by his own early challenges.

“Yield lag was pretty severe on all our crops,” Larry says. “We still use more chemicals than we want to manage rye and cheatgrass in our wheat. I think we can do a better job of controlling weeds with crop rotation, but we’re not there yet.”

Larry purchased a Case IH single-disc SDX40 drill with a tow-behind air cart on 7½-inch spacings. The drill features a run-behind boot that places seed, and it has a seed-lock wheel behind the boot that firms soil to ensure seed-to-soil contact.

Among the drills’ features that fit Larry’s needs is its weight. The first growing season he used the drill, the soil was very dry due to significant drought and the drill’s weight helped penetrate dry crop residue that year. Pahl uses fertilizer boxes on the drill to hold bags of sand that to add weight if needed

“Depending on planting conditions, I place either one or two bags of sand in those boxes to add weight on the drill openers to penetrate the soil,” he says. “I learned about that practice at a no-till tour.”

Larry’s John Deere 1720 8-row planter came with trash whippers, which he removed because they didn’t work in his 30-inch corn. He doesn’t use any added accessories or precision planting tools on either the planter or drill.

Dry fertilizer is applied in the seedbed for all crops. A Bestway 90-foot sprayer is used to topdress liquid fertilizer with streamer nozzles as needed.

Fertilizer needs, determined by annual soil sampling, are still less precise than he’d like, but Larry isn’t ready to implement grid sampling yet.

“I’m not always certain fertilizer needs are spot on, and we might be on the low side of meeting fertilizer needs,” Larry says. “The reason I haven’t fertilized more heavily is the hail belt here. We’ve watched neighbors invest in heavy fertilizer inputs and lose a beautiful crop to hail. That’s a significant risk for us.”

If he did increase fertilizer, Larry would apply more nitrogen and phosphorus to bump up wheat yields. While he’s satisfied with his current 30- to 35-bushel-per-acre yield average, he believes 60-bushel wheat is within his reach under good weather and fertilizer conditions.

One other way Larry manages input costs is raising his own wheat seed. In recent years, he’s used the Clearfield wheat variety to help manage rye and cheatgrass. If unfavorable weather conditions persist, he could return to raising his own seed. 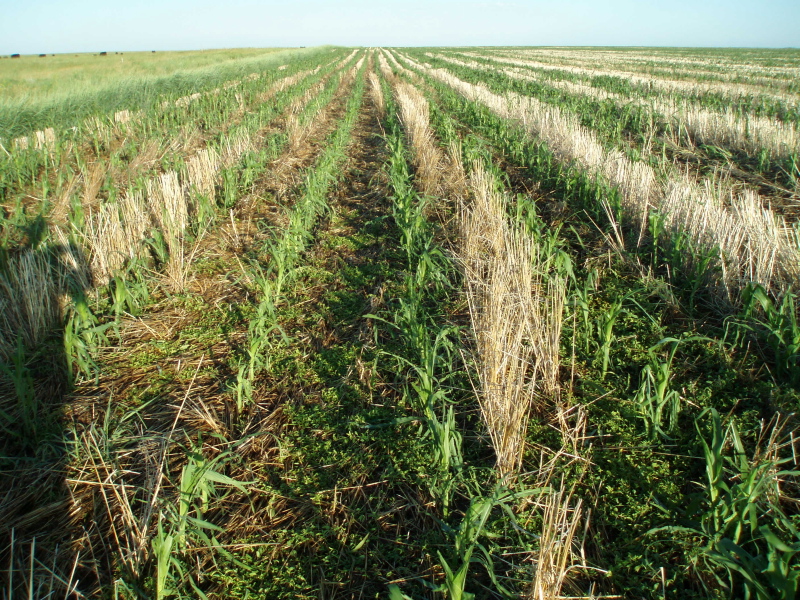 Tall wheat stubble is very obvious in no-tiller Larry Pahl’s corn crop in the first weeks after the corn emerges.

Larry’s no-till strategy includes using two different combine heads to make the most of crops and set up desired planting conditions for the next growing season.

The Shelbourne-Reynolds stripper header he uses with his combine makes it possible for him to maintain even crop residue distribution. It also leaves tall wheat stubble that helps catch winter snow.

“We only receive about 14 inches of rain here every year,” Larry says. “The tall stubble works great to help increase moisture. The stripper header plucks the head off our wheat and millet and that way we don’t have any issues with consistent crop residue.

“The result of that can be as much as an 8-bushel-per-acre yield increase in corn planted behind wheat, which we attribute to the higher moisture retention.”

At an elevation of 5,280 feet, Larry is happy with his dryland 70-bushel average corn yield.

A flex header used to harvest yellow peas works well when pea vines lay over or vine growth is stunted. Addition of an air reel to the flex head improved harvest results.

“The only thing that would be better would be adding a draper head, but you can’t always have the Cadillac,” Larry says.

Larry has taken time and made a lot of changes to develop a no-till system that works on his farm. However, he is confident that he hasn’t yet reached his full potential with soil quality or yield.

“For a long time I believed there was a success level we couldn’t exceed. Now I’m questioning that. Some of my neighbors’ poorest crops are better than my best crops because they’ve used no-till much longer than I have.

“I did push my fertilizer inputs for two years and was hailed out. There was no way to know how successful my fertilizing effort was. For 2015, economics caused me to cut back again. I believe I could hit a home run and achieve a higher yield level. It’s just going to take time to get there.”