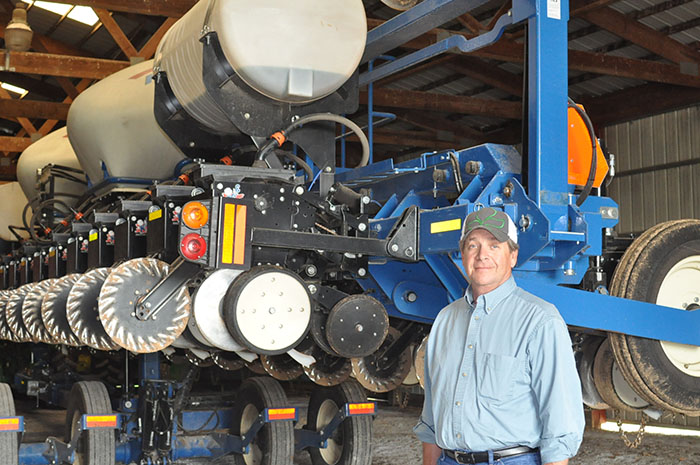 Kentucky no-tiller Jack Estes is seeing promising results from keeping his fields covered as much as possible, switching up herbicides and improving sprayer performance.

KEEPING KINZE. Jack Estes’ last two planters have been Kinzes because he likes the amount of weight on the wings that he hasn’t seen on other planter brands. His 3660 Twin-Line plants 30-inch-row corn and 15-inch-row soybeans, and has 25-wave coulters, Keeton seed firmers, a Martin spaded and solid closing wheels and Martin drag chains.

THE ESTES FAMILY may have adopted no-till in 1983 to avoid picking rocks, but in the 32 years since they’ve seen many more advantages to giving up the plow.

Today, Jack Estes, who handles the crop side of the family business, is building on the advantages they’ve gained from no-till by adding cover crops and canola to their rotation, improving planter and fertility operations, and rotating herbicide chemistries to tackle weeds.

The family’s conversion to no-till practices started with a new farm the Smiths Grove, Ky., family began renting in 1983. The Estes discovered it had rocks on the hillsides, and they didn’t want to bother picking them, so they decided to try no-tilling.

That same year they had purchased a John Deere 1690 Soybean Special planter, which Jack says was heavy enough to work through the tough soil. Not long afterward, Beacon and Accent herbicides came out to control johnsongrass in corn, which also helped the transition.

Since adopting no-till, the fields are smoother, the soil is stronger and they’re not ponding anymore. Organic matter has also increased 0.5-1%, bringing their average whole-farm levels up to 2-2.5%. In their area, 1.5-2% is…