The other day a grower showed me an ear of corn exhibiting long, flowing locks of blonde silks tumbling down the sides of the husk leaves and asked two questions: "Why are the silks so long?" and "Do such long silks bode ill for the success of corn pollination?"

Both questions suggest that the guy has some experience thinking about reproduction in a corn field and understands that silks are the functional stigmas of the female flowers of a corn plant. Each silk connects to an individual ovule (potential kernel) and must be pollinated in order for fertilization of the ovule to occur and a kernel develop. The guy also seemed to know that emerged silks are typically only 2-3 inches long; not 6-9 inches long like those on the ear he had.

Silks begin elongating from the ovules near the base of an ear shoot sometime around leaf stage V12 to V14, followed by silk elongation from the remaining ovules of the ear shoot, sequentially from base to tip of ear. The silks from ovules from the lower third of the cob are typically the first to emerge through the husk leaves; followed sequentially by the remaining silks over a 4-8 day period.

Emerged silks initially lengthen from 1-2 inches per day, but then slow over the next few days due to natural aging or the inhibition caused by "captured" pollen grains as they germinate and initiate pollen tubes that penetrate the silk and elongate toward the ovule. The latter inhibition of silk elongation occurs within about 12 hours of pollination, if not earlier. Without pollination, silk elongation will slow to a stop within about 9 days after emergence. 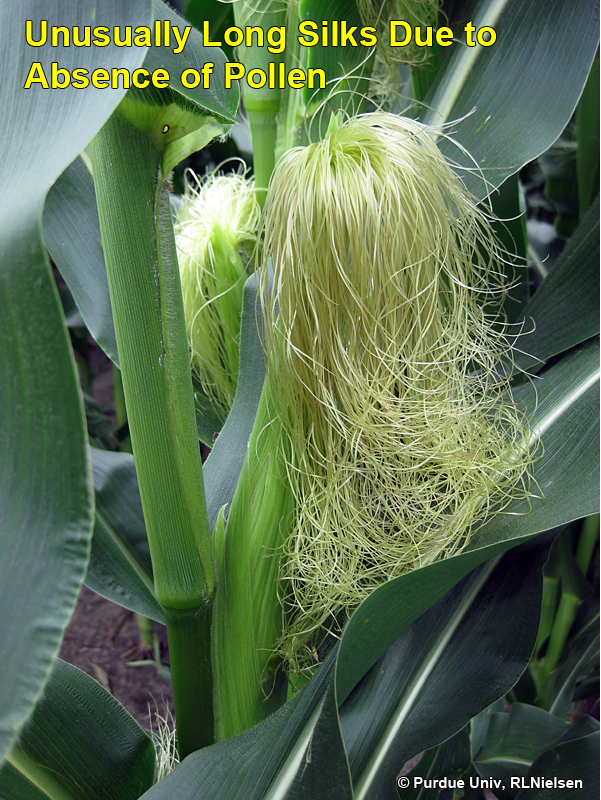 Most of us "gray beard" agronomists were taught that full tassel emergence (growth stage VT) often occurred 2-3 days before the first emergence of silks (growth stage R1). In fact, the verbatim definition of the VT stage from Ritchie et al. (1993) was that "The VT stage is initiated when the last branch of the tassel is completely visible and the silks have not yet emerged." Furthermore, pollen shed often began before or just at the timing of silk emergence.

Corn field aficionados will tell you that the timing of tassel emergence/pollen shed/silk emergence has changed somewhat in some of today's hybrids. In my own demo plots at the Purdue Crop Diagnostic Training & Research Center, it is not uncommon for silks to begin emerging before the tips of the tassels are evident from the upper leaf whorl. Sometimes pollen shed begins 2-4 days after the initial emergence of silks from the ear husks.

Relatively cool temperatures, cloudy weather and ample soil moisture promote sustained silk elongation. Coupled with hybrids that may silk one or more days prior to pollen shed from the tassel, silk lengths can become quite impressive. This year, I have measured exposed silks as long as 9 inches.

Can there be a downside to these long silks? Yes, there is a risk that kernel set near the base of the cob may suffer if the initial emerged silks deteriorate enough prior to pollen shed that they become non-receptive. Kernel set near the butt end of the cob may also suffer if later-emerging silks from higher up on the ear "shade" or otherwise obstruct the initial emerged silks from "capturing" pollen.

The image below illustrates the potential for non-pollinated areas near the base of the cob in a hybrid that silked several days prior to the beginning of pollen shed. 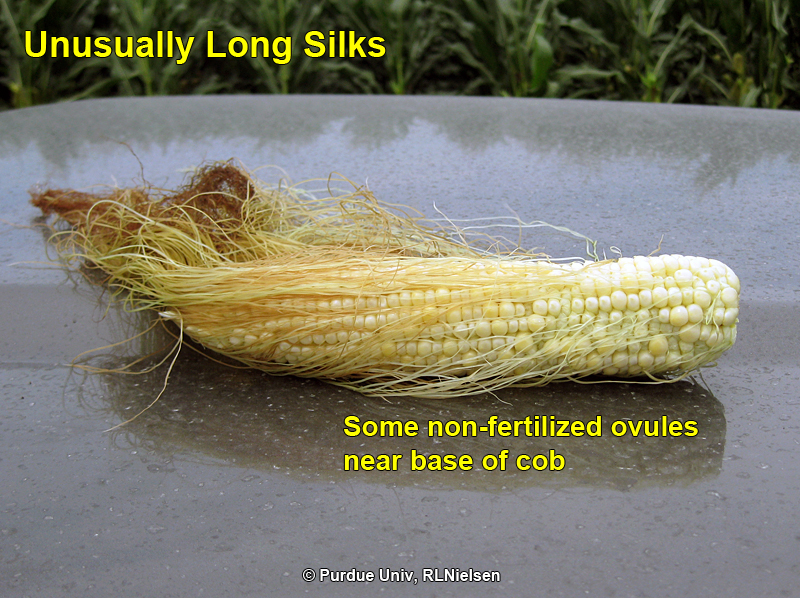 The images below illustrate another example of unusually lengthy silks from the same hybrid, but with only minor kernel set problems. Thus the existence of unusually long silks by themselves do not automatically result in poor kernel set. 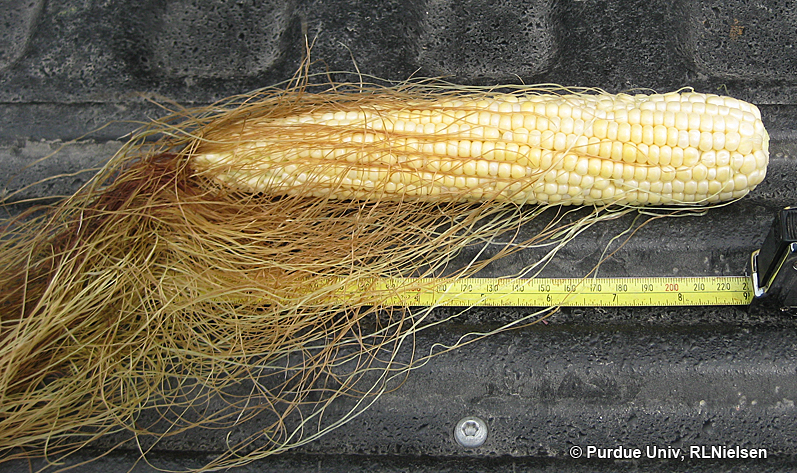 While unusually long silks are, well, unusual, don't get overly pessimistic about the prospects of poor kernel set as a consequence. Time spent now walking fields during the early stages of grain fill may help provide an overview of the extent of the problem, if any.