How's Your SCN Resistance Holding Up?

If you have fields infested with the soybean cyst nematode (SCN), it is very likely that you are growing SCN-resistant soybean varieties to manage the pest. Resistant soybeans have been a great management tool to combat SCN, but the resistant varieties suffer from a serious lack of genetic diversity.

Why so Little Diversity?

Resistance to SCN in soybeans is due to four or more genes in the plant. Soybean lines, called sources of resistance, are used in plant breeding programs to introduce, or “cross,” resistance genes into soybean varieties to create SCN-resistant plants that are agronomically superior as well.

The most current edition of the annually updated list of soybean cyst nematode-resistant soybean varieties for Iowa soybean farmers is available online.

Effectiveness of SCN Resistance is Eroding

A short video, Evolution of Soybean Cyst Nematode (SCN) Resistance in Soybean Plants, from Iowa Public Television, explains the concept of breeding for SCN resistance and the selection for SCN populations with increased reproduction on SCN-resistant soybean varieties.

How to Check for SCN “Creep”

How can you determine if SCN numbers are starting to creep up on resistant soybeans?  A scientific approach involves collecting soil samples from SCN-infested fields and comparing the results of the samples over time as successive crops of SCN-resistant soybeans are grown. This type of soil sampling is best done in the fall, after harvest. An ICM News article later this growing season will provide guidelines on the best way to collect soil samples to determine SCN population densities.

Another way to assess the effectiveness of SCN-resistant soybean varieties is to dig roots and look for SCN females on the roots during the growing season. The appearance of numerous SCN females on the roots indicates that the resistance is not effective. Ineffective resistance may be because the SCN population has elevated reproduction against that source of resistance, because the soybean variety does not possess all of the necessary SCN resistance genes, or because of both of these situations combined.

Root digging for the purpose of checking the effectiveness of SCN resistance is best done from July through mid August. The SCN females will appear as small, white dots (see photo below) on the roots of SCN-resistant plants, just as they appear on roots of susceptible soybean varieties. 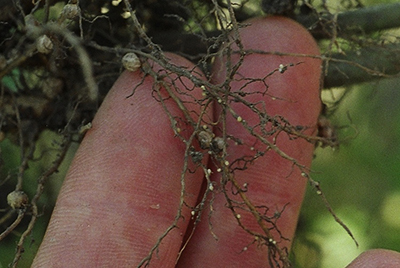 What’s a Soybean Grower to Do?

So what should Iowa farmers do if PI 88788 SCN resistance is losing its effectiveness?

Above all else — don’t stop growing soybeans. Soybeans are vital to the Iowa economy and provide a much-needed second crop in our cropping systems.

Iowa State University has the nation’s largest and most comprehensive program evaluating SCN-resistant soybean varieties in the field. The program is funded by soybean checkoff funds through a grant from the Iowa Soybean Association. More information about the ISU SCN-resistant Soybean Variety Trial Program is available from the 2014 ICM News article, Trial Results Show Dual Benefits of SCN Resistance. Also, seed companies can be very good sources of information about which SCN-resistant soybean varieties offer the greatest nematode protection as well as yield.

Growing corn is another SCN management strategy that farmers use to keep SCN in check. SCN numbers can decrease by as much as 50% in a single growing season with corn, but there is much less of a decline in SCN numbers in second-year corn and the effect becomes even less effective after that.

Finally, there are several seed-applied SCN management and protectant products available, and more such products may become available in the future. These seed treatments can help bolster the performance of SCN-resistant soybean varieties with PI 88788 resistance growing in fields infested with SCN populations that have increased reproduction on the resistance.

A Multi-Faceted Approach is Needed

A multi-faceted attack should be used to manage SCN. Growing SCN-resistant soybean varieties with varying sources of resistance and nematode-protectant seed treatments in rotation with corn is a broad-based SCN management approach that provides the greatest chance of prolonging profitable soybean production in SCN-infested fields for many years to come.