Getting a Handle on Nitrogen Requirements in Sunflowers

Nitrogen fertility is a major concern for many growers, including those who are raising sunflowers.

A typical approach to determining nitrogen (N) needs in crops is to multiply some factor by the field’s yield goal and then subtract soil nitrogen and legume credits.

For example, in sunflower it is assumed that approximately 5 lbs. of N is taken up with every 100 lbs. (cwt) of yield production. However, properly crediting soil N can be difficult when producing sunflowers. Active roots often go down 4-6 feet, whereas residual N is typically assessed from a 0-24 inch soil sample.

This is often the reason sunflower will outperform yield goals for a given N application rate. Their deep roots have the ability to draw nitrogen from deeper in the soil than other crops. 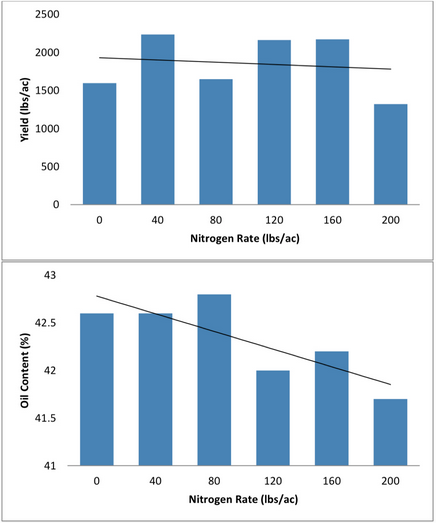 Figure 1 shows a common response to increasing N rates. Typically, as more N is available to the crop, plant biomass increases resulting in larger leaves and taller stalks. However total seed yield does not increase. A rate of 80 lbs. of N is very common across the state, and less is often more when it comes to yield response.

As more cropland is converted to a no-till system, soil organic matter will continue to increase. Growers can utilize the nutrient supplying power of the soil, near the surface and at depth, while saving money by reducing reliance on high rates of applied fertilizer.

What You Need to Know About Sorghum Nutrient Requirements

A Checklist for Getting Your Wheat Crop Off Right

Managing Nitrogen With Field Peas in Your No-Till Rotation