Last year, Missouri had more soybean injury from pre-emergence herbicides than ever before. It was an epidemic that many farmers across the state experienced, brought on mostly by the prolonged periods of cool and wet weather before and after planting.

This year, there are already some calls and samples that have started to come in with these same issues. We don’t know if we’ll see as much soybean injury as last year, but if we’re going to continue to have resistant waterhemp as the No. 1 weed problem, growers will have to get used to seeing some degree of early season soybean injury.

The good news is, early season injury as a result of pre-emergence herbicides doesn’t always translate into soybean yield loss. Whether or not yield loss occurs will depend on a lot of factors, most notably the growing conditions after herbicide application, but a study conducted last year has helped us understand this issue a little better.

In this study, soybean height and biomass reduction was measured in response to pre-emergence soybean herbicides 5 weeks after emergence and then followed this through to see what impact these injury levels had on yield at the end of the season. A small portion of the results from the study are shown in the graph below (click here to see the complete results). 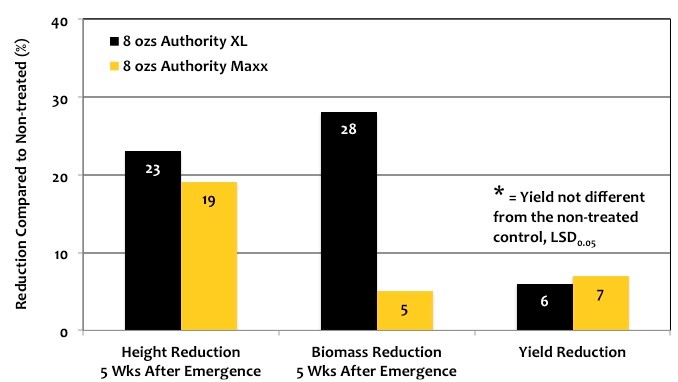 Basically, what this one year of data would suggest is that soybean plants can recover from a substantial amount of early season injury and, as mentioned above, that early season injury doesn’t always translate into soybean yield loss. As shown in the graph, as much as 23% soybean height and 28% biomass reductions were measured in response to standard Authority XL and Authority Maxx herbicide treatments, but neither resulted in any statistically significant yield loss when compared to the weed-free, non-treated control.

These results can be used as a guide for what could be experienced in the next several weeks. There may be some substantial injury that looks significant, but if growers wait for the soybean to have better growing conditions and let the crop grow through it, chances they will be much better off letting the original crop recover than starting over.

Tips On How To Reduce Early-Season Emergence Stress