As a corn crop progresses toward physiological maturity, the leaves naturally begin to senesce (die). The timing and pattern of leaf senescence are genetically regulated but are also influenced by environmental triggers, including severe photosynthetic stress. 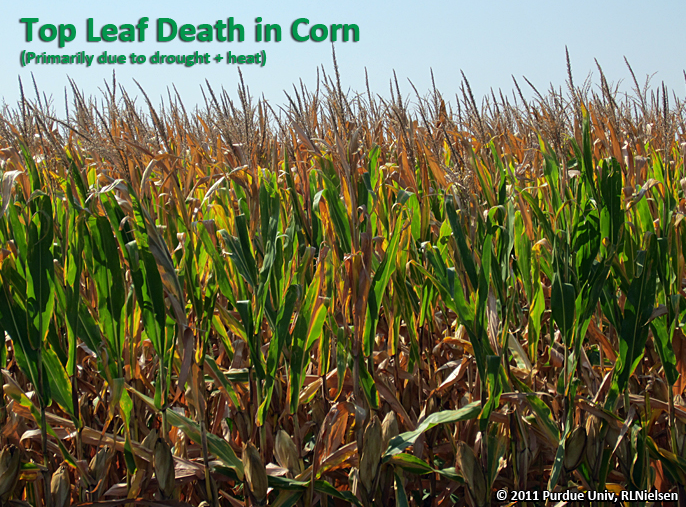 The pattern of leaf senescence that many of us remember, perhaps wrongly, is one where leaf death begins at the bottom of the plants and slowly moves up toward the upper leaves.

In fields where the upper leaves begin to die before those in the central part of the plant, the effect can cause an unusual golden "glow" in the upper canopy against the morning or evening sun.

Interestingly, the pattern of simultaneous upper and lower leaf senescence may not be that unusual from a physiological perspective. Canadian researchers (Tollenaar & Daynard, 1978) documented this same pattern of senescence among ten adapted dent corn hybrids in trials conducted in the mid-1970's.

Furthermore, a faster rate of leaf senescence during one of the years of the study was attributed to a warmer, drier weather pattern during the grain fill period that accelerated the rate of grain filling (sound familiar in 2011?). More recent research (Valentinuz & Tollenaar, 2004) suggested that this pattern was also evident in good grain yield growing conditions.

For many Indiana cornfields in 2011, the top-bottom pattern seems to have occurred most frequently in fields experiencing moderate to severe drought stress throughout the grain fill period. This "natural" pattern of upper leaf senescence usually affects all plants within a field or within areas of fields and perhaps distinguishes it from the more random plant pattern typical of leaf diseases like anthracnose or insect damage like European corn borer.

Death of top leaves may occur from one or more of several factors and may be partially distinguished by whether all plants are affected or only random plants throughout a field. The ultimate effect on grain yield obviously depends on how early in the grain-filling period the death of the upper leaves occurs.

Death of top leaves can occur throughout the year as a direct result of a combination of excessive heat and drought stress as plants struggle to maintain leaf health during periods of soil moisture deficits and high transpiration before or during the grain fill period. Such leaf death is usually preceded by a gray-green color and wilting of the upper leaves.

This drought-related pattern of upper leaf senescence also often affects all plants within severely drought-stressed areas of affected fields. In 2011, upper leaf death in response to heat + dryness occurred in some late-planted fields before they even reached the pollination stage.

Death of top leaves can also be the result of European corn borer (ECB) or Southwestern corn borer (SWCB) tunneling damage to the upper stalk itself or girdling of the leaf sheath attachments at the stalk nodes. Such insect-related patterns of upper leaf senescence usually occur more randomly from plant to plant rather than affecting all plants within a field or area of field.

This cause of damage to the upper canopy is less common today than 20 years ago because of the wide-spread adoption of Bt-corn borer trait hybrids, but can obviously still occur in fields planted to non-Bt trait hybrids.

Finally, death of upper leaves and stalks can be the result of infection by anthracnose (Lipp & Mills, 2001; Robertson, 2007). One of the distinguishing symptoms of anthracnose "die-back" or "top-kill" is the presence of black lesions visible on the outer stalk tissue behind the leaf sheaths (Robertson, 2007).

This fungal disease can be particularly damaging if it significantly shortens the grain-filling period resulting in premature kernel black layer development . Such disease-related patterns of upper leaf senescence usually occur more randomly from plant to plant rather than affecting all plants within a field or area of field.