Similarly to 2010, applications of foliar fungicides to early-stage corn (V5-V6) are being marketed this year. Now, however, we have more data from research on application timing than we did a year ago.

Data from multiple states were compiled and summarized by Drs. Kiersten Wise and Greg Shaner, Purdue University (Figure 1). This summary from seven states (Illinois, Indiana, Iowa, Ohio, Wisconsin, Minnesota, Kansas), indicates that a greater yield response was observed when fungicides were applied at R1 compared to V6, with the largest response being when V6 applications were followed by R1 applications.

From a disease control perspective, applications at the V5 to V6 stage would be too early to provide much protection against the most common foliar fungal diseases that can cause yield losses in Illinois corn fields (gray leaf spot, northern corn leaf blight, southern rust).

Generally, the only fungal leaf disease observed on leaves of early-stage corn is anthracnose leaf blight (caused by Colletotrichum graminicola). This disease generally is most prevalent in corn-on-corn fields, since the pathogen survives on corn stubble.

Most available information suggests that once corn reaches the 6-leaf stage or older, leaf lesions do not generally spread to the upper leaves. Management of anthracnose leaf blight of corn thus is not generally needed. 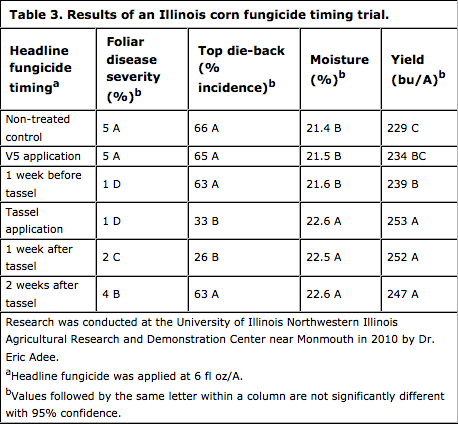