Spurred by skyrocketing commodity prices, farmers are outbidding most investors and to buy additional land.

The quarterly increase in the value of “good” agricultural land was 5%, tabulated from 220 surveys submitted by District bankers.

Farmers (rather than investors) purchased a higher proportion of the acres sold as well. Moreover, the number of farms sold, the acreage sold, and the amount of farmland for sale grew. Over half the reporting bankers expected farmland values to continue rising during the second quarter of 2011.

Although there was weaker demand for non-real-estate farm loans compared with the first quarter of 2010, the credit conditions for farmers strengthened overall. The availability of funds for lending was higher than a year earlier. Loan repayment rates increased, while renewals and extensions of agricultural loans decreased.

Agricultural interest rates seemed to edge up after hitting bottom at the start of 2011. The average loan-to-deposit ratio of 69.8% was the lowest in 14 years; this value was 8.4 percentage points below the level preferred by the respondents on average.

Illinois, Indiana, and Iowa led the way with year-over-year increases in the value of “good” agricultural land of 17%, 19%, and 20%, respectively. Michigan and Wisconsin farmland values showed solid gains of 11% and 9%, respectively.

Farmers tended to outbid investors for agricultural land at auctions, according to some respondents. The reporting bankers thought farmers bought an even higher share of farmland than during the prior year; 48% of the respondents saw an increasing share of land purchased by farmers and only 6% saw a decreasing share in the period from October 2010 through March 2011.

With 75% of the bankers observing higher demand for the purchase of farmland and just 1% observing lower demand, the market for farmland was ripe for fast-rising land values. 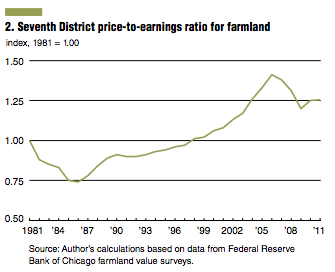 The number and acreage of farms sold were larger than a year ago, as about 10% more of the bankers reported increases rather than decreases with regard to these quantities.

After adjusting for inflation using the Personal Consumption Expenditures Price Index, District cash rental rates increased 14% from 2010 (see chart 1). This increase was the second largest, behind that of 2008, since tracking of District cash rents began in 1981.

With the increase in farmland values matching that for cash rental rates, there was no change in the price-to- earnings (P/E) ratio for agricultural land (see chart 2).

Both cash rental rates and farmland values rose because of higher agricultural prices, especially crop prices. Prices in the first quarter of 2011 averaged $5.37 per bushel for corn and $12.33 per bushel for soybeans, according to the USDA.

For the 2011–12 crop year, the USDA estimated price intervals of $5.50 to $6.50 per bushel for corn and $12.00 to $14.00 per bushel for soybeans. Milk, hog, and cattle prices were all up at least 20% from the first quarter of 2010. Prices for these products are forecasted by the USDA to remain above the levels of the first quarter of 2011 throughout the rest of this year (partly supported by strong global demand).

Cash-renting agricultural land, although increasingly with clauses that allow owners to benefit when crop prices increase further, remained the dominant method (80%) in the District for farms operated by someone other than the owner.

With 16% of farmland on crop shares, 1% on a bushel basis, and 3% on other arrangements, there appeared to be an inclination by owners to get more involved in farm operations and garner higher returns in 2011. Illinois remained the District state with the lowest percentage of cash rentals (68%), even as rentals on a crop share basis diminished (26%).

The index of non-real-estate agricultural loan repayment rates hit its highest level in 3 years (146) for the first quarter of 2011, as 49% of the respondents noted higher rates of repayment and only 3% noted lower rates.

Farmers had less need to seek bank loans. The index of demand for non-real-estate farm loans dropped to a post- 1987 low of 81, illustrating this point. (Of the reporting bankers, 19% of them observed higher loan demand, while 38% observed lower demand.)

Not surprisingly, the average loan-to-deposit ratio declined to 69.8%, the lowest level since 1997. The share of banks below their desired level was 77%.

Also, collateral requirements tightened again from a year ago, with 14% of banks requiring more collateral during January through March of 2011 and 1% requiring less. The%age of loans guaranteed by the Farm Service Agency (FSA) of the USDA remained above 5% of the District farm loan portfolio, largely because of heavy use of the FSA guarantees at a small number of banks.

Interest rates on agricultural loans ended their downward trend that started after the last peak in 2006. New farm operating and real estate loans averaged 6.01% and 5.80%, respectively, as of April 1, 2011.

The rapid increase in agricultural land values may not be over, according to survey respondents.

For the second quarter of 2011, 56% of the responding bankers ex-pected farmland values to continue rising in their areas and 2% expected a decline.

Respondents anticipated that the volume of non-real- estate farm loans would decrease during the period from April through June of 2011 compared with the same period of 2010.

Also, there was an indication that dairy loan volumes in Wisconsin were poised to rise after several challenging years.