Focus on the ‘4Rs’ for Higher Yields

By Julia Gerlach posted on October 22, 2022 | Posted in Nutrient Management

With 35 years’ experience working for the University of Wisconsin Extension, research is second nature for Sparta, Wis., no-tiller Jim Leverich. Now retired, he maintains a rigorous program of testing to get the best yields he can on his 1,000-acre corn-soybean operation that his forbears began as a 25-acre orchard in 1864. In testing components of the “4Rs” of nutrient management, he’s found anhydrous ammonia consistently provides the most efficient source of nitrogen (N) while offering the highest level of safety for the environment.

While anhydrous ammonia is Leverich’s go-to source for N, he’s quick to point out that his choice is based on years of research and testing on his own farm and that it may not be the right solution for other farmers. “There are many good ways to manage N using different sources,” Leverich says.

“In the testing I’ve done over the years, I’ve found that anhydrous ammonia is the product that tends to hold in my soil and is most reliable,” he says. “Whenever I’ve used just ammonia vs. sidedressing, I’ve always gotten 5-8 bushels more with using just ammonia. That’s not to say you couldn’t use a two- or three-pass system with urea or 28% or 32% and have significant results that are quite similar.”

Besides providing better yields, Leverich also says ammonia is the safest form of N — not necessarily for the operator, but for the environment. “Anhydrous is the most dangerous source to use as the applicator because of hooking up the wagons and making sure that you don’t get any of that material in your cab. You really have to be cautious with it,” he says.

“The other products are much safer to use for the operator, but as far as using N in a way that is less risky to the environment, ammonia is better.”

Once applied in the soil, Leverich explains, anhydrous ammonia (NH3) converts to the ammonium ion (NH4), which is very stable in the soil due to its positive charge that is attracted to the negatively charged soil and soil organic matter. Over time, soil biology converts NH4 to nitrite (NO2) and nitrate (NO3), which is a plant-available form but susceptible to loss. Some other forms of N, namely 28% and 32% UAN, contain NO3, so that portion is available sooner.

“Anytime you band fertilizer, you reduce the rate of losing it…”

“When the N is in the NO3 form, it can denitrify (breakdown from NO3 to N2 gas), or it can be at risk of leaching if it’s wet. Ammonia just offers a little bit more protection,” he says. “If you’re using products other than ammonia, you definitely need to be applying them two or three times a season because they are riskier.”

Leverich makes a point to say that just because ammonia works best for him, it may not be the best for every farmer. He explains that the tests he’s done were on his lighter soils, which influenced on his decision to use ammonia.

“If I did my tests on heavy soil, then my conclusion might be different. The other N sources might be as good as the ammonia for me, but I don’t want to take the risk because a third of my farms have less ability to hold N. If you have heavy prairie soils and lots of clay and loams, then 28% and 32% might do just as well as ammonia. It’s kind of a specific thing from farm to farm,” he says.

Fertilizer stability also depends on whether it’s spread on the surface or banded, Leverich says. “Anytime you band fertilizer, you reduce the rate of losing it.”

Likewise, topography plays a role in his decision making.

“I don’t want to sidedress in 20-inch rows on contours and hills — it’s difficult to get into the crop,” he says. “If I had big, flat black fields, that would probably be more of an option.”

No-tilling is also a factor, as it affects moisture retention. “No-till fields retain their moisture pretty well, but that means sometimes it’s difficult to get into a field when it’s time to sidedress — it’s too wet.” 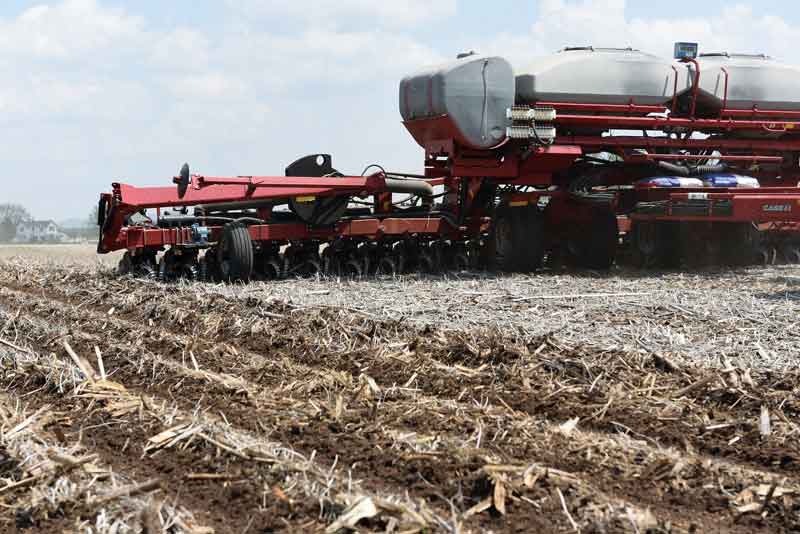 40-INCH BANDS. Leverich no-tills corn in 20-inch rows using a 24-row Case IH 1245 planter, applies anhydrous ammonia in 40-inch bands and then uses RTK to plant 10 inches off the zone of nitrogen (N). He uses about one-third more N in the 40-inch bands than he would in 30-inch rows.

Because Leverich no-tills corn in 20-inch rows, he applies his ammonia in 40-inch bands and then uses RTK to plant 10 inches off the zone of N. He uses about one-third more N in the 40-inch bands than he would in 30-inch rows, which he needs to keep in mind in terms of management.

“Because that band is more concentrated, it’s going to kill more bacteria around it and it’s going to take longer to release,” he says. “That’s a benefit to me. It hangs on into the season longer, but because the ammonia is 10 inches off the row, I have to make sure that I put some N down in the row because the little seedlings need N before they grow enough roots.” Therefore, he says, he needs another source of N.

As usual, he’s experimented a fair amount with fertilizer placement.

“Years ago I built a deep bander that would put fertilizer down 4-6 inches, kind of like a strip-till rig. It put the anhydrous ammonia in the middle, like I’m doing now, but I had deep banded the nutrients every 20 inches and I’d plant over that band.”

Leverich says he didn’t see a benefit to that system and notes several soil scientists who have tested this sort of setup. “They never found any big advantage to stripping in nutrients,” he says.

Because liquid fertilizer generally costs more than dry, Leverich uses a spreadsheet that calculates the cost of using liquid vs. dry fertilizer.

“It usually costs me around 3-4 bushels more corn to use liquid,” Leverich says. “In other words, if I get 3-4 more bushels of corn where I use starter fertilizer compared to where I don’t, then it’s profitable. And often times when I use that starter fertilizer, it’s an extra 7 or 8 bushels.

“A lot of people say it’s not worth putting on, but if you don’t put it on as liquid, it has to go on as dry.

“And in no-till, I think it’s important — it’s a risk aversion thing to have those nutrients there. If you have colder soils temporarily because you’re no-tilling, the soil won’t begin to start mineralizing those nutrients until you get your black band and get planted and the soil starts to warm up. But there’s a little delay there. So, in some years it might be beneficial to have the nutrients there.”

He adds that no-tillers need to be mindful of the soil surface during planting and nutrient applications.

“You must have a good clean strip of soil where you’re planting,” Leverich says. “RTK is one of those things that was monumental in making no-till successful. A lot of people still aren’t using it, but if you’re in a corn-soybean rotation with heavy corn stalks and high yields, you either need to strip-till or do something to get that corn residue controlled. I leave the stalks standing as much as possible when I combine, and I plant into the middle of the corn stalks,” he says.

“First, if you put N on the residue, it’s going to bind up in the residue and therefore it won’t be as available to the crop. It’ll be stuck in the residue until a good rainfall releases some of it,” he says.

He adds that no-tilling into clean soil helps reduce bouncing of the row units. “If the black strip is there and you’re in between the crowns of the corn, it’s likely that your gauge wheels are going to be running on a smooth soil surface and your planter is not going to bounce as much.”

For no-tillers who use coulters, Leverich suggests running a row cleaner ahead of the coulter because it helps keep the ground clear. “If you don’t cut the stalk off before you try to move it, it can’t bunch up in front of the planter.”

Leverich adds that planting narrow rows in wet conditions will exacerbate residue problems if row cleaners aren’t placed before coulters, as more material will bunch up.

Sulfur is another major consideration in his nutrient management plan. “We need to apply way more sulfur than we thought we did,” he says.

“Because sulfur is leachable like N and because all the cars and trucks have been changed now to different kind of emissions, there’s not near as much sulfur coming out of them. It used to be farmers in the Midwest got a lot of sulfur from the vehicle emissions. Now they have to buy it and put it on the soil.” 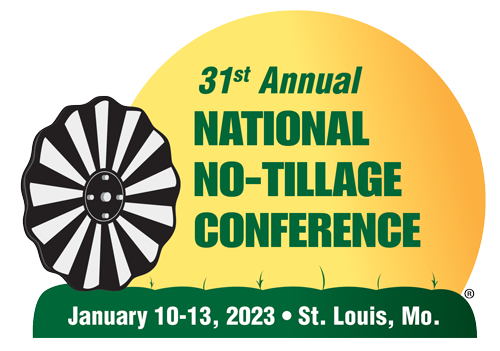 Jim Leverich will be among an outstanding lineup of speakers at January’s National No-Tillage Conference in St. Louis, Mo. In two presentations, Leverich will discuss what he’s learned from conducting 30 years of no-till trials and offer more specific details on the fertility programs outlined in this article. For more speaker and topic details, see the National No-Tillage Conference program in this issue.