Two years into a study looking at methods of combining a living cover crop between corn rows shows that yield can be maintained at high levels using environmentally friendly practices. 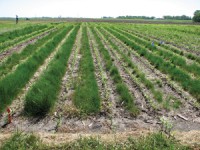 With U.S. government targets requiring a 30% displacement of petroleum consumption with fuels made from biomass by the year 2030, agronomy researchers are studying methods of harvesting more and more stover, which previously was left on the field.

Targets will require removing 75% of stover to use as biomass in the production of biofuels. Removing stover can cause more water runoff and deplete soil of the organic material it needs to remain productive.

One method of keeping the soil in place and replenished with organic matter is to plant grasses between the corn rows that would stay on the field year-round.

“We are looking at trying to grow corn in a perennial sod, so that we can protect the soil and provide these other environmental services at the same time,” says Iowa State agronomist Ken Moore.

Developing a cover-crop system that allows nutrients, organic matter, water and carbon to remain in the soil is a great idea. But farmers won’t do it if it reduces yields, Moore says.

The results so far have been encouraging.

After the first 2 years of the study, researchers have already discovered a system that allows for removal of up to 95% of the corn stover, increases the amount of carbon kept in the soil, increases water-use efficiency in corn and also maintains corn yield.

One cropping system the team examined in 2009, for example, increased harvest from 11,867 kilograms per hectare (kg/ha) of corn grain using traditional production methods, to 12,768 kg/ha with the new system — all while improving the soil and harvesting almost all of the stover.

The researchers are quick to point out they are not ready to proclaim that they have uncovered the perfect system, but they are encouraged.

“It’s remarkable,” says Jeremy Singer, assistant professor of agronomy and researcher at the USDA’s National Laboratory for Agriculture and the Environment in Ames, Iowa. “Even in two bizarre years — 2008 was the year of the floods and 2009 had the coolest July on record — we harvested close to 100% of the corn stover and we’re obtaining similar yields as the no-ground cover control, while increasing carbon additions to the soil.”

One of the keys, according to the researchers, is finding a ground-cover grass that is less active during the spring. This allows the corn to absorb needed water and sunlight at the beginning of the growing season without competing with the ground-cover grass.

Later in the spring, as the corn creates a canopy over the shorter grasses, there is less competition for sunlight and nutrients as the corn becomes dominant.

Having more than one species thrive on the same piece of ground is not a new idea, Moore says. Traditional prairies contained many different species of grasses and plants that complemented each other as they competed for water, sun and other inputs.

“From an ecological perspective, it seems intuitive that we can do this,” Moore says. “Nature does it all the time. The prairies that existed before farmers got here were complex plant communities that change with the season. And we have a succession of species which we are trying to set up here.”

Moore says one of the best features of the new systems is they are not that different from the way producers are currently farming.

Could Energy Crops Be In Your Rotation’s Future?