MACAULEY “MAC” KINCAID, of Jasper, Mo., comes strolling out of his house on a muggy summer morning, smartphone in one hand, coffee in the other. Wearing a hipster-style trucker hat, he carries himself with a palpable confidence and ease. Despite his youth, Kincaid knows what he’s doing when it comes to his 650-acre farm that is 100% no-till and cover cropped, with 70% of the land being used for grazing cattle.

Kincaid wasn’t always a no-tiller and cover crop aficionado, though. He started conventional farming in 2012 with limited success. His first corn yield was only 98 bushels per acre, while wheat yielded 80 bushels per acre.

“I was watching a lot of YouTube videos and reading anything I could find on no-till, and what it kept coming back to was that I needed a cover crop with the no-tilling,” he says. “I decided to no-till my wheat and soybeans, but everybody said you couldn’t no-till corn in my environment. I tried no-tilling corn, and it was still a flop. I think it was because of my pore space. I couldn’t get enough oxygen in the soil, and the soil couldn’t breathe. The soil was tightly compacted because of the previous year’s soybeans and a fallow period.”

“So, I tried cereal rye as a cover crop. The first soybean harvest after using cover crops was a success and yielded 50 bushels per acre. By 2016, I was 100% committed to the system.”

Kincaid now raises multi-species covers on every acre, which he says he prefers over a monoculture.

“A monoculture is a detriment to soil health,” he says. “Diversity is so important. We have to have that diversity for the soil microbiome.”

The diversity seems to be paying off. In 2020, Kincaid’s dryland corn yielded 160 bushels per acre, despite 2-3 months of very dry conditions.

In 2021, he no-tilled his soybeans on April 1. When they were at V2, and the cereal rye and barley were in anthesis, he used a 20-foot Progressive Ag Innovations roller-crimper pulled by a 1999 Case IH MX120 to terminate the rye and barley. “The cover crop was tall, though, and the soybeans got spindly because they were stretching for sunlight in that rye,” he says.

Nevertheless, the soybeans yielded a respectable 74 bushels per acre. 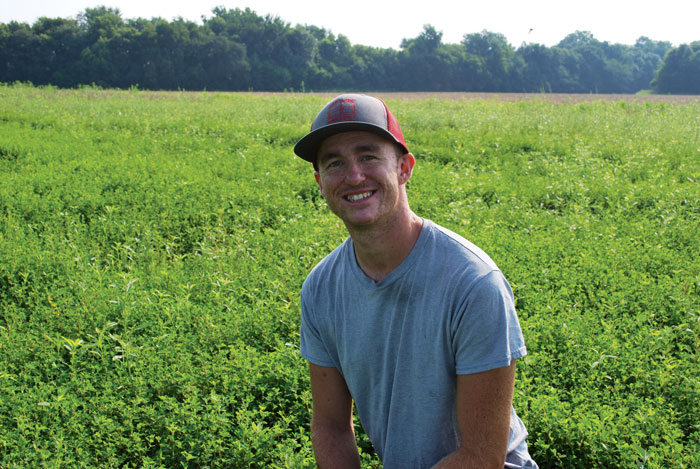 ENTREPRENEURSHIP IN ACTION. Macauley “Mac” Kincaid has expanded his farming operation to include more ground, his own cattle herd, selling cover crop seed and custom grazing cattle for other cattle producers.

Kincaid’s goal is to have all his acres covered each year. He says that if he sees bare soil for more than 20 days, it bothers him.

“I know my soil aggregate structure is going to start collapsing because I don’t have that carbon to hold the glomalin together,” he states. “I’m trying to grow something at all times, not just cash crops.”

Kincaid runs about 40 head of cattle on the home place and another 40 head on a nearby farm that he rents from a neighbor. Both small herds are at twice the typical stocking rate for the pastures. The cattle are a mix of breeds — some are South Poll, some are Salers, while others are just commercial crossbred.

“The reason we can use such a higher stocking rate is because we pull them off the perennial pasture and take them to annual forages and cover crops,” Kincaid says. “We use adapted multi-paddock (AMP) grazing and I want to increase my stocking rate even higher.”

The AMP grazing system was designed by Dr. Allen Williams and utilizes varying stocking densities. Kincaid pushes that system to the max by shrinking the sizes of his paddocks. No two paddocks are ever the same size; the size of the paddock is determined by the stocking density and amount of available forage.

“Right now, our cows are running about 100,000 pounds per acre for stocking density of about 40 animals,” Kincaid says. “I push that up over a million pounds per acre sometimes, but not for an entire day. They’re just out on a paddock for a certain period.”

He considers his cattle to be tools and doesn’t brush hog or spray pastures. Kincaid has tinkered with overseeding a warm seeding mix and fescue in his perennial pastures, but he says the economics don’t always pan out. His perennial pasture is chock full of forbs, flowers and grasses, with more than 100 different species  all contributing to biodiversity.

“Right now, our cows are running about 100,000 pounds per acre for stocking density. I push that up over a million pounds per acre sometimes, but not for an entire day…” – Mac Kincaid

“When there’s so many different plants growing together, the phytonutrients in the plants are so much higher,” he says. “It might not yield as much, but when the cattle graze a multi-species cover or a diverse perennial pasture, they’re going to be healthier. They like to eat a diverse diet, just like we do. We wouldn’t be very healthy if we ate just lettuce every day. And then when we eat the cattle that were fed a diverse diet, we’re healthier as well.”

Kincaid says that each plant in a pasture provides different micronutrients that cattle need. For example, thistles are high in iodine — a necessary micronutrient for cattle — something Kinkaid learned from Fred Provenza’s book “Nourishment: What Animals Can Teach Us About Rediscovering Our Nutritional Wisdom.”

“Provenza says that whenever he takes mineral away from his cattle, their weed consumption goes up because all those species have different nutrients.”

With that in mind, Kincaid leaves a lot of biomass when grazing — what he refers to as “solar panels”.

“We try to leave 50-75% of the above-ground biomass when moving cattle between paddocks,” Kincaid says. “If you take away half the solar panel, it’s working only at 50% capacity. With more, the plants can regrow back faster because they can photosynthesize easier and they can pull more carbon from the atmosphere because they have more plant material there.”

During the spring, average rotation between the paddocks is every 30-45 days. That slows down to every 60-80 days later in the summer.

“Coming out of spring with increased moisture, we can run a faster rotation because the plants are growing faster than can be grazed,” he says. “In the summer, as the weather gets drier, we slow the rotation down. I typically move my cattle around later in the day because the Brix level of the plants is highest then.”

Moving the cattle when the Brix levels are highest allows the cattle to eat less, leaving more plants to go reproductive, which Kincaid says is better for the soil. The time of year and amount of sunlight the pasture has received are all factors in the Brix levels of the plants.

“When you try to keep pastures in a vegetative state as long as you can, and do that for years, it can have a negative impact on the soil,” he says. “The seed bank becomes thinner, and grasses become sparse because plants don’t reach their reproductive phase.”

Kincaid says that he has only one fence across the center of the farm with polywires branching off from that. Multiple water tanks are low in relative cost and still allow cattle access to water. Kincaid grazes all the cover crops by putting fences on any row crop land.

“That little bit of fence and a few water tanks is not that costly, and it really pays off,” he says.

Kincaid even grazes through the winter. Last year, he only purchased and fed 9 bales of hay all season.

Kincaid admits his fields aren’t the most weed-free fields in the area, but he’s all right with that. For the past 3 years, he’s been testing the weed tissue samples from his farm. Through those tests, Kincaid discovered that besides the thistles that are full of iodine, lambsquarter has 75 parts per million of boron and Johnson grass has 101 parts per million of zinc — all necessary nutrients for his cattle.

“The top one-third of the plant is the highest nutritional part of the plant, so the cattle are getting the highest point of nutrition every single day,” he says. “I look at broadleaf weeds as forbs. They’re there for a reason. There are a bunch of different grasses as well, including big bluestem, broom sedge, fescue, Reed’s canary grass.”

When Kincaid finds native grasses in his fields, he has his cattle graze around those areas, leaving them to naturally reseed.

“A cow’s hoof is designed to stimulate the soil,” he says. “When they walk, it can bring up some of the seeds that are down in the seed bank and bring them to emergence.”