By Prashant Jha posted on December 1, 2020 | Posted in Crop Protection

New research from Iowa State University suggests cover crops, narrow rows and a smart herbicide program can help suppress herbicide-resistant weeds in soybeans by as much as 87%.

CONTROLLING WATERHEMP is an increasing challenge for soybean growers due to the evolution of multiple herbicide-resistant populations. With dwindling herbicide resources, there’s a need to integrate non-chemical strategies — such as cover crops and alternative row spacings — into current weed management programs.

Cereal rye is the most common cover crop grown in the Midwest due to its winter hardiness and short life cycle. The high carbon-to-nitrogen (C:N) ratio of cereal rye compared to legume or brassica covers results in a slow degradation of the residue, which increases the duration of weed suppression. This, along with a greater biomass accumulation, makes cereal rye an ideal cover crop candidate.

Another non-chemical, cultural strategy to suppress weeds and complement herbicide efficacy is to plant soybeans in narrow rows instead of wide rows.

These strategies can be integrated with an herbicide program to manage herbicide-resistant waterhemp in soybean.

“Delayed termination of the cereal rye, is the key to obtaining maximum weed suppression…” – Prashant Jha

In 2019-2020, Iowa State University conducted a field study at the ISU Research and Demonstration Farm near Ames, Iowa, to quantify the impact of a cereal rye cover crop and soybean row spacing (15 inch vs. 30 inch) on the glyphosate-resistant waterhemp seed bank.

The previous crop was corn, with three levels of waterhemp control achieved by: 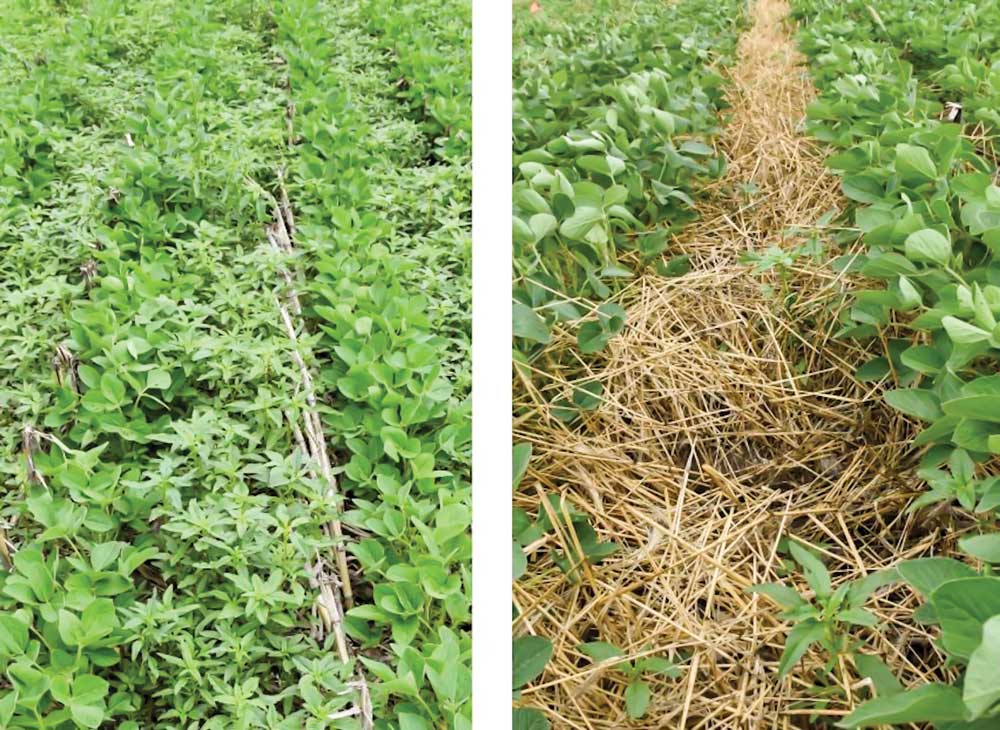 3. The same aggressive herbicide program as mentioned in #2, plus harvest weed seed control at corn harvest (no weed seed input). This was achieved by hand-removal of any late-season waterhemp survivors to prevent seed bank inputs, simulating what would be expected from a Redekop Seed Control Unit attached to a combine, which pulverizes weed seeds and renders them non-viable.

The three programs resulted in three different levels of weed seed production. After corn harvest, cereal rye was drilled at a rate of 60 pounds per acre in the second week of October 2019.

On May 22, 2020, Enlist E3 soybeans were planted into the standing rye cover crop on 30-inch or 15-inch row spacings. On the same day, cereal rye (at anthesis stage) was terminated with 32 ounces per acre of Roundup PowerMax. In addition, 27 ounces per acre of Dual II Magnum was applied to provide early-season residual control of waterhemp.

Cereal rye biomass, at the time of termination, averaged 4,600 pounds per acre. To examine the potential of cover crop and narrow-row soybean on waterhemp control, no post-emergence herbicide was applied in the soybean phase of the study. 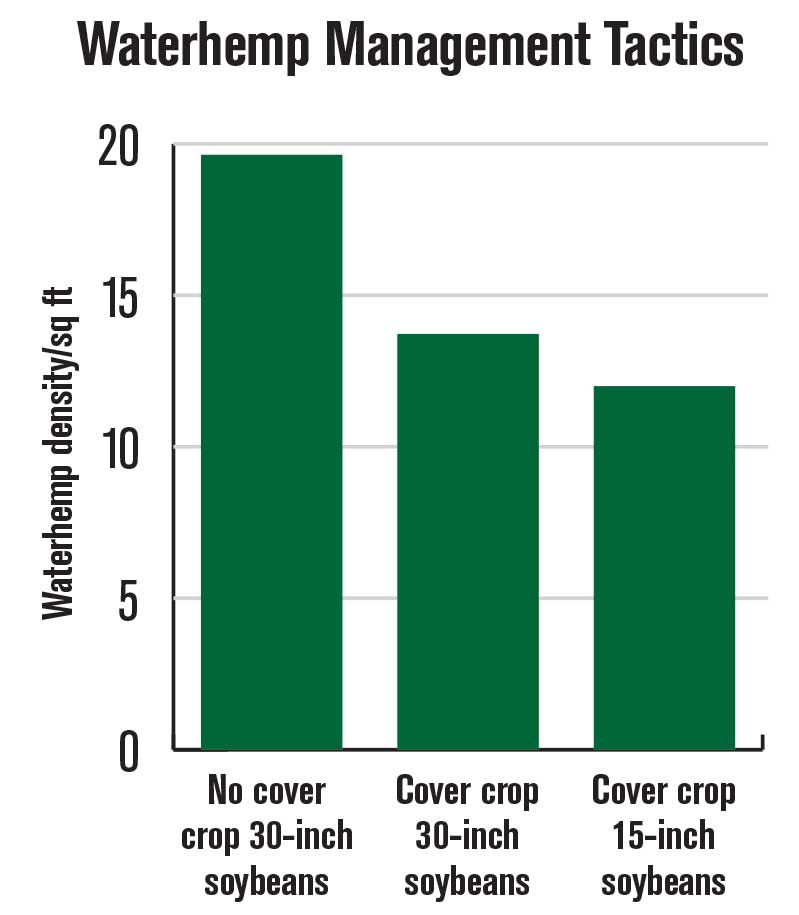 The integration of these tactics resulted in a significant suppression of waterhemp even with limited herbicide inputs in the soybean phase of the rotation.

For instance, an aggressive weed control program in corn followed by a rye cover crop and narrow-row soybean showed 87% less waterhemp emergence, compared with the treatment that had marginal weed control in corn, no cover crop and 30-inch soybean row spacing.

Soybeans were harvested in the fall of 2020. While yield data was still being analyzed at the time of this writing, there were no apparent adverse effects from the delayed cover crop termination on soybean growth, canopy development or yield. 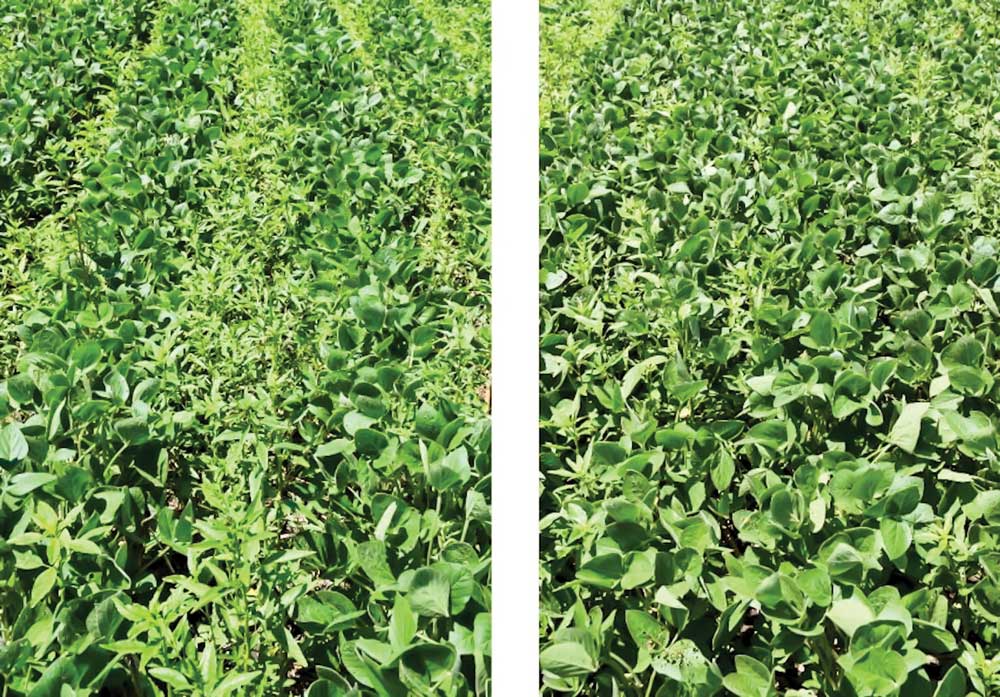 ADJUSTING ROW WIDTHS. A much larger amount of waterhemp grew in soybean planted in 30-inch (left) vs. 15-inch (right) rows.

Results suggest that delayed termination of the cereal rye is the key to obtaining maximum weed suppression, both in terms of extent and duration. Planting soybeans in narrow rows for early canopy was also helpful in reducing late-season waterhemp infestations in soybean.

None of the tactics (cover crops, herbicides, narrow rows, harvest weed seed control) are stand-alone solutions to weed management. Rather they act as “many little hammers,” with the goals of reducing sole reliance on herbicides, enhancing the effectiveness of existing herbicide tools and making weed management systems more resilient and less prone to developing resistance over time.

Growers should utilize these integrated tools based on their farm’s needs, profitability and the extent of the weed infestation problem.