Waterhemp continues to be one of the most widespread and troublesome broadleaf weed species with which Illinois farmers must contend.

Factors related to the species’ biology, such as prolonged germination and emergence, obligate outcrossing, and high seed production, contribute to management challenges.

The evolution of herbicide resistance in Illinois waterhemp populations adds another very challenging obstacle for effective management. Recently, many have sent questions and concerns regarding the inability to control waterhemp with various post-emergence soybean herbicides.

A description of herbicide resistance in Illinois waterhemp populations, along with post-emergence herbicide options to control waterhemp, follows. 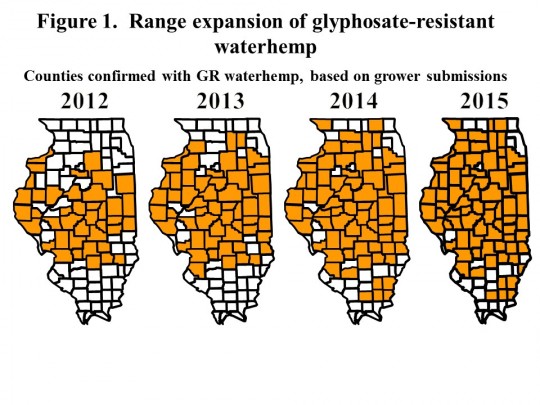 Figure 1 shows the range expansion of glyphosate-resistant waterhemp from 2012–2015.  These data are based on samples submitted to the University of Illinois for resistance verification with molecular marker assays.  Figure 2, using the same data source as Figure 1, shows the current range of PPO-resistant waterhemp in Illinois.

It should not be assumed that resistance does not occur in non-shaded counties; a better interpretation is simply that we have yet to test a positive sample from those counties.  In other words, it is altogether likely resistance to glyphosate and PPO inhibitors occurs in all Illinois counties. 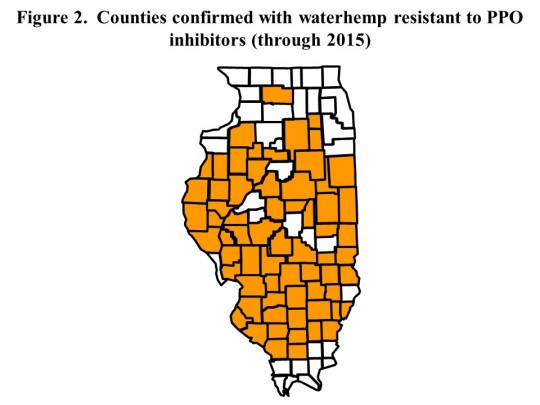 It remains very unlikely that a herbicide with a novel site of action will be commercialized in the foreseeable future. At the same time, the frequency of multiple resistant waterhemp will only increase.

Many eagerly anticipate the ability to apply 2,4-D or dicamba to new herbicide-resistant soybean varieties, but the long-term utility of these herbicides to control multiple-resistant waterhemp will be compromised without thoughtful and implemented stewardship practices.

Early Post-Emergence Plus Residual in Soybeans

Post-Emergence Applications In Soybeans: Are You Waiting Too Long?