After a book opened Doug Manning’s eyes to the benefits of no-till, the Kalispell, Mont., no-tiller worked through many challenges in his first go around at seeding.

Initially, I was interested in adopting no-till practices to achieve greater efficiency at planting time. I was also looking to find a drill that could better place seed and fertilizer in a conventional setting.

My search led me to look at many different drill options, and many of them were not designed for conventional seeding. I discovered that no conventional drill on the market could do what I was wanting to do.

Specifically, I wanted to band higher rates of fertilizer at the same time that I placed the seed. Only no-till drills were being designed to band large amounts of fertilizer. Most dedicated no-till drills, I was told, wouldn’t work in a conventional setting when the ground is not consolidated.

I began to consider less passes and no-till because those drills were equipped to place seed accurately. I also began to see the benefits of having a firmer seedbed, such as consistent seed placement.

At that point, I knew that I would go completely no-till because I wanted to maximize efficiencies: time, labor, resources, and inputs. I continued to research the drill options at trade shows, on the Internet, talking to dealers and representatives, and through farm magazines.

Then, I read a book titled No-tillage Seeding in Conservation Agriculture, by C.J. Baker, et al. The book opened my eyes to the importance of soil health, and I began to appreciate the soil-health benefits associated with no-tilling. 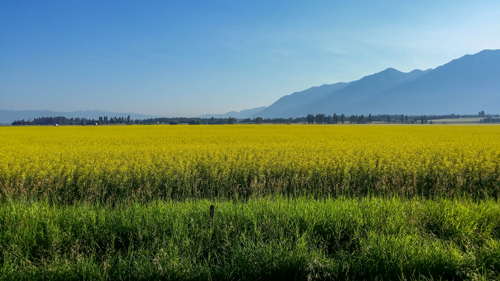 The notion of being able to rebuild soil health in the farms entrusted to me strongly appealed to my sense of stewardship. I then visited the state of Washington to evaluate the performance of a no-till system in high-residue situations.

The research that I completed narrowed my choices to a few brands. Again, by this time, I was looking for efficiency in placing fertilizer and seed, as well as, rebuilding soil health. Of the few brands that met the criteria, Cross Slot was the only tool that could no-till into 80-plus-bushel wheat residue without prior ground preparation, soil disturbance or other residue management techniques.

I personally liked the automatic downforce system that Cross Slot offers, as it allows the drill to maintain consistent seed depth through a variety of soil conditions. Consistent seed depth is an important first step in getting a consistent even field: Seeds placed too deep, or not deep enough, don’t thrive and yield potential is reduced from the beginning.

I liked what I saw and decided that the Cross Slot drill would be a good fit for me and my operation. 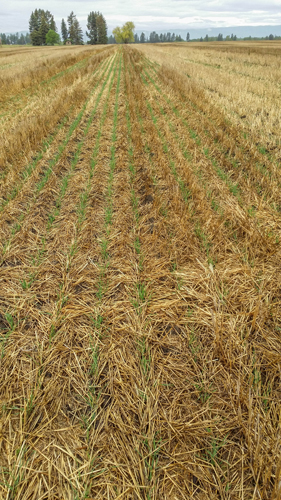 A major shift I had to make was to adjust my perspective of what a healthy cropped field looks like.  Conventional cropping shows rich, black dirt between clean, neat rows of green seedlings. No-till looks rag tag. The residue covers the seedlings and appears less organized.

I chose to begin my adventure with no-till seeding with what I thought would be an easier transition.  I planted spring wheat into a pea stubble field. There was less residue, and I could see the ground better. I moved to canola, peas, and then barley, and I cropped about half of my spring-planted acres with the no-till drill.

The first season was full of challenges. Learning to operate the new drill posed major challenges: I had to learn to keep my fan speed up. If I didn’t, I had plugged fertilizer tubes and I’d spend considerable amounts of time unplugging them.

The GPS took time to get used to and had a few glitches to work out. Prior to this drill, we worked at keeping seed depth shallow, so I had to rethink placement. I found that seeding a little deeper is better for optimizing the drill’s potential and ensuring a healthy stand in the firmer, untilled soil.

I also learned patience. No-till fields remain wetter longer, so I had to wait longer to plant into the soil.  It’s a bit ironic that the moisture that I want to keep in the soil prevents me from planting earlier, but I think the benefit outweighs the frustration of having to be patient until the ground is ready. 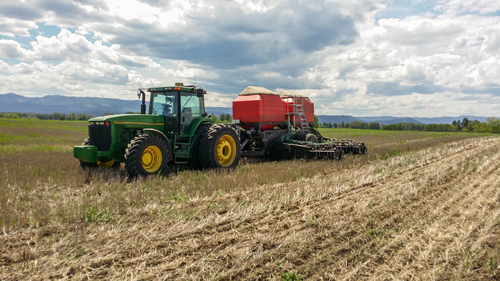 Doug Manning seeds canola, winter and spring wheat and other crops with his Cross Slot drill, pulled with a John Deere 8400 tractor. Manning says crop yields in his first season of no-tilling were comparable to when he was using a conventional drill.

I was thankful to discover that the Cross Slot did perform in heavy residue, as it claimed it would. Weed issues weren’t prevalent — although, I did learn that a burndown treatment is necessary even if it didn’t initially seem that it was. There are more weed seedlings present than are visible because the residue hides the seedlings.

I seeded 60% of my crop using my no-till drill the first year and bumped up my nitrogen by 15% because I was able to band product in the seedbed, and I hadn’t been able to do that before. My seeding rate stayed the same because seed placement should be better with the new drill.

Overall, I would consider my first season of no-till farming as successful one.  My yields were comparable to my prior yields with the conventional drill.  I did not have any fields that I felt underperformed. In fact, my highest yielding crop was a no-till planted crop.

My crop input expenses were less because I did not use as much fuel or spend as much time planting.  At the end of the season, I was hopeful and confident that I could improve the following year.  I looked forward to seeing signs of soil health improving. I maintain that optimism as I have now planted my third no-till crop.