There’s nothing new about the decline of rural and small-town America. The late-20th century globalist policies that have provided inexpensive goods and services and improved efficiencies have also outsourced and off-shored rural jobs by the millions, driving folks to the cities and leaving decimated towns behind.

Buffalo Center, Iowa, is a case in point. According to the 2020 U.S. Census, the town currently has a population of 857 citizens, slightly fewer than the 875 people living there when it was founded in 1892. At its peak in 1980, then town boasted 6 churches, a hospital, 3 grocery stores, 4 livestock buyers, 4 farm implement dealers, 2 feed stores, 3 restaurants, 3 gas stations and a Chevrolet dealership.

For the families and farmers living in Buffalo Center and other communities like it, a declining population means much more than just a lack of growth. It means lost infrastructure and reduced or eliminated options for many important services — churches struggling to maintain themselves, a single grocery store, 1 farm equipment dealer, no livestock buyers, no feed stores, 1 restaurant, 1 gas station, no car dealership, fewer teachers and smaller class sizes. As people have moved away, stores and businesses have shut down, as have social resources and networks.

Zack Smith, who grew up in Buffalo Center and strip-tills 305 acres there, has seen the effects of declining rural populations and is taking strides to bolster his community. Recognizing the interconnectivity of all life and that healthy populations are built on healthy foods that come from healthy soils, he’s seeking to galvanize his community from the ground up by bringing biodiversity back to the land with an autonomous mobile barn that allows him to incorporate grazing animals in his row crop acres. He calls it the Stock Cropper. 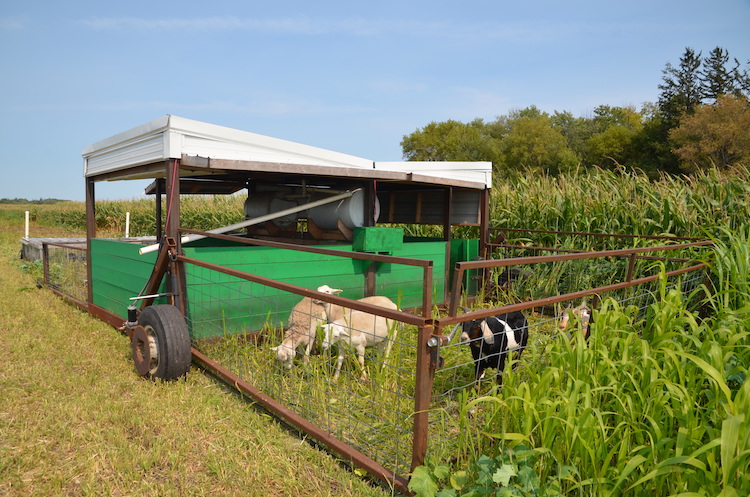 BARN ON WHEELS. The Stock Cropper, designed by strip-tiller Zach Smith of Buffalo Center, Iowa, is a mobile barn with animal enclosures that integrates grazing in row crop acres — on the go.

Smith refers to the Stock Cropper as “the re-intersection of livestock and row crops working together in the field at the same time,” and says he sees it as a way of reestablishing the soil microbial communities that his forebears most likely achieved in the past.

“My great-grandfather Murray wasn’t necessarily a stock cropper 100 years ago on this farm,” Smith says. “But he had a lot more biodiversity than what I have with just a corn field outside of the Stock Cropper plot. He had lots of different things because he didn’t have the ability to grow just one thing. He needed to use plants and animals together as tools. And because he didn’t have the technology or the traits or the herbicides, he had to develop farming systems that addressed those needs on their own.

Smith recognizes that stock cropping isn’t for everyone and won’t replace commodity agriculture. Going forward, he sees two paths in agriculture — one being the conventional route of continuing to scale by taking on more acres. “Then there’s going to be a path where the people who want to participate are going to have to do things differently to compete and stay relevant. And that’s the vision I’m after,” he says.

Soil Microbial Communities. At a field day on his farm on Sept. 10, 2021, Smith revealed a variety of Stock Cropper barns nestled within strips of corn with interseeded cover crops growing between the rows. With 6-8 species of cover crops and 5 types of above-ground livestock — chickens, pigs, sheep, goats and beef cows — Smith is able to make the most of biodiversity for the sake of the soils and ultimately his harvest.

For instance, including cover crops in the system is helping Smith take greater advantage of available sunlight for a greater period of time throughout the year.

In a traditional corn and soybean rotation, Smith says farmers make use of only about half the available growing degree days. A cover crop or pasture crop will start growing at 34 or 35 degrees (F), which usually happens in March. Planting of cash crops normally starts at the end of April or the first part of May, and those crops are pretty much done growing by early September.

“We want to have a living root functioning in the soil 270 days out of the year,” he says, “so after the ground freezes up, we can continue stimulating the biology so we’re ready to go again the next spring.”

When it comes to soil biology, growing monoculture crops has much the same effect on the microbial community as the late 20th century globalist policies had on small towns. A lack of diversity in plants leads to fewer types and declining numbers of soil microbes — the very microbes whose job it is to provide nutrients and resources to the crops. That lack of microbial diversity can directly and powerfully reduce yields by making plants use more internal resources to get the nutrients they need.

“There’s nothing simple about what we’re doing,” says Smith. “But biodiversity is a strength, and there’s lots of cool interactions that are happening in the biological world out here that conventional agriculture doesn’t think or talk about. We’re really interested in introducing a lot more diversity and resiliency.”

Financial Returns. The key to the Stock Cropper system is enterprise stacking, Smith says. “The addition of the other species and the order that we have them in all work together to benefit the whole, especially from a financial standpoint,” he explains. “Stock cropping with one animal doesn’t pencil out, but stock cropping with three animal species, or maybe with the potential to harvest solar energy and utilize that in the future, is a whole different set of numbers.”

He says a recent financial analysis showed that stock cropping can bring 7 times as much profitability per acre (averaging crop acres and barn acres) as normal corn production in row cropping.

“It’s about maximizing potential output,” he says. “We want to create as much profitable product in time and space, form connections with community and give farmers the opportunity to scale without having to farm half the county.”

Smith says the Stock Cropper system can also minimize the need for inputs.

“When you watch the Stock Cropper, you’ll see a trail of animal manure behind these barns,” he says. “That’s fertility.”

“Next year, I estimated my fertility bill will be $175 per acre to grow corn, between dry fertilizer and nitrogen,” he says. But in the Stock Cropper acres, “we’re probably going to be able to cut back about 80% where the animals have gone by the nutrient load calculations based on what we’re getting out of the barns and maybe only have to put a little bit of N on where we grow corn — no dry fertilizer at all.”

Smith also says the Stock Cropper will allow him to minimize the use of herbicides, many of which aren’t even all that effective anymore due to the increase of herbicide resistance.

“I have yet to see waterhemp that’s resistant to a goat or a cow or even a chicken,” he says.

Citing a culture of secrecy in the conventional ag companies, Smith also envisions the ability to make his food production system more transparent to the consumer by setting up cameras on the barns so interested parties can witness for themselves how the animals are grown and treated.

“In the livestock industry today, there’s a lot of ‘Stay Out’ signs at companies that want the consumer to just trust them,” he says. “It’s a bad look for agriculture, in my opinion, and with this system I’m hoping to turn that tide and open up the chains of transparency.”

Community Impacts. While these goals are all inspirational, Smith says the heart of it all comes back to community. In his area, he explains, there were 16 viable farm operations when his father was born, and of those 16, there’s only one left today that is being farmed by the same family.

“We don’t think about it a lot because it’s a slow grind — it didn’t happen overnight,” he says. “But that’s happening continually, and it’s having impacts on all of those communities. So there are fewer businesses, we’ve got declining enrollment [in schools]. Something has to change and we have to make a decision whether or not the system we have is the path we want for the future.”

And there’s the personal side as well. As the father of two teenage girls who aren’t especially interested in agriculture at the moment, he’s rightfully concerned about succession planning and keeping the farm going in the future. “Living in a small town that keeps shrinking, my hope for the farm continuing on past me depends upon a viable business option that could potentially reverse that trend,” he says.

Having spent the first half of his career trying to grow more bushels per acre, Smith says he’s at the point now where he wants to make life better. With an eye on improving his community and his soils, he has challenged himself to create a system that creates value for more people rather than fewer.