No-tillers from around the world gathered in the Gateway to the West for valuable lessons in farm management and cutting-edge field research at the 28th annual National No-Tillage Conference.

Nearly 1,000 no-tillers gathered at the Union Station Hotel in St. Louis in January to swap ideas and learn how to improve their no-till operations at the 28th annual National No-Tillage Conference.

In general sessions, roundtable discussions and classroom presentations — along with networking sessions with speakers and sponsors — attendees soaked in knowledge on no-till topics such as how to make cover crops pay, managing pests and diseases, planting green and getting the most from precision technology.

The editors of No-Till Farmer compiled 5 top takeaways from the conference, which reconvenes Jan. 12-15, 2021, in Indianapolis, Ind.

As producers push populations higher and use more cover crops, more residue is present on the soil surface at all times of the year, says Phil Krieg, agronomist for Syngenta.

While this is generally good news for soil biology, it also creates a more hospitable environment for overwintering diseases such as tar spot in corn, which has become a serious problem in the Upper Midwest.

Tar spot spores are carried by wind or rain-splash. The disease is associated with cool temperatures (61-68 F) and high relative humidity, and it’s prevalent when more than 7 hours of dew occurs at night. Unlike many diseases that only occur at specific stages of development, tar spot can infect corn at any time if conditions are favorable.

To control tar spot, Krieg recommends planting corn hybrids that are least susceptible to the disease; rotating to a non-host crop the following growing season, and starting fungicide programs prior to the onset of disease if weather conditions are favorable because curative applications aren’t generally successful.

The most frequent question farmers have when considering integrating cover crops is whether or not they pay off, says Rob Myers. To help answer that inquiry, the North Central regional director of Sustainable Agriculture Research and Education (SARE) shared data from 5 years of national cover crop surveys.

While acknowledging that there is a wide range of costs, SARE has pegged the median cost of cover crops at $37 per acre, which includes $25 for the cost of seed and $12 to plant it.

Year 1 returns were negative for both crops, but by year 3 they were shown to be a little better than break-even and in year 5 the return on cover cropping on corn yields was $17.90 and for soybeans it was $10.18, assuming average weather and management conditions.

Certain practices sped up the return. When using cover crops allowed farmers to cut out a herbicide pass, the average $27-per-acre savings moved the payoff to year 2 for corn and year 1 for soybeans.

Using cover crops for grazing fenced land that has access to water offered a $49.23 per acre return, allowing for a potential payoff in year 1 for both cash crops. NRCS incentives, with rates of $34-53 per acre, can enhance the cover crop payoff picture, Myers says.

In his classroom talk “I’ve Got My Soil Health Data — Now What Do I Do With It?” Mitchell Hora revealed that in 2016-2017, he did monthly Haney tests on his 800-acre farm near Washington, Iowa.

As a cover crop user, the soil health consultant and co-founder of Continuum Ag wanted to learn to what extent nutrients were being tied up by the cover crop and when the nutrients would be released. He compared inorganic nitrate (N) levels on two no-till fields, one without a cover crop and one with cereal rye planted after corn harvest.

In both fields, biological activity increased in August-September, with a large N release occurring after harvest when it wasn’t useful. 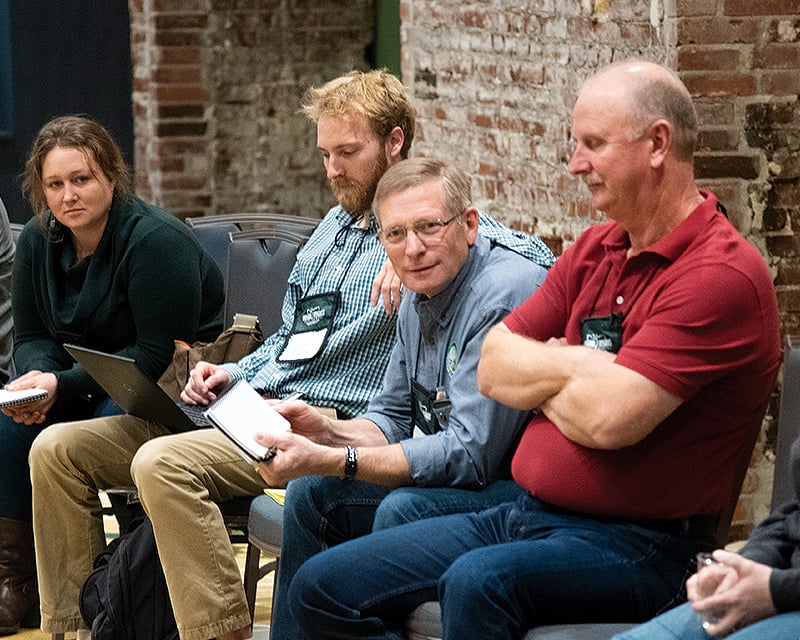 RIVETING ROUNDTABLE. At one of the 76 Roundtable discussions scheduled during the event, attendees gather to discuss slug control in the Midwest.

At the end of September, he planted cereal rye on the cover crop field and tests showed that the cover crop held onto the N until spring, with N availability levels remaining relatively low (around 10 pounds per acre or less) from November to April.

In the field without a cover crop, a February warmup released about 35 pounds per acre of N into the soil, which then got washed away during spring rains, dropping below 10 pounds per acre by April.

Hora says this testing showed that the presence of the cover crop was beneficial if for no other reason than it prevented N loss during the warm, wet spring prior to planting.

According to David Johnson, agricultural soils in the U.S. have a low fungal to bacterial (F:B) ratio and only about 11% of the energy captured by plants stays in the plants.

The rest goes to the soil as an attempt to restore its microbial community, he says. But he also believes it’s possible to improve that ratio to more than 50% efficiency.

To restore biological function to agricultural fields, the microbiologist from the Center for Regenerative Agriculture at California State University-Chico, developed his Biologically Enhanced Agricultural Management (BEAM) system, a compost brimming with thousands of microbes.

With the increasing attention on soil and water health, the Ecdysis Foundation wanted to track insecticidal seed treatments after planting.

According to Ecdysis Foundation research scientist Mike Bredesen, they tested sunflower seeds treated with a neonicotinoid called thiamethoxam. Leaf tissue tests showed that very little of the chemical could be detected in the plant by the time it started blooming at R1.

However, Bredesen points out, plants break down thiamethoxam into a different, more toxic neonicotinoid called clothianidin. The same plants tested for clothianidin contained the metabolite through R6 after it had finished pollinating.

Cutting-Edge No-Till Practices on Display in the Circle City