According to NASS, Illinois producers harvested 36 percent of the corn crop and 52 percent of the soybean crop by October 20. That’s still behind the average pace of harvest, but harvest continues in many areas this week, and as it progresses, fields in many areas are becoming available for fall field work to begin.

Many producers in central and northern Illinois have fall anhydrous ammonia application high on their to-do list, especially after the fall of 2018 and the spring of 2019, when getting any nitrogen fertilizer applied was a challenge. As we have seen before, most people were able to work around the weather issues to get N applied, in some cases by changing to in-season applications, and sometimes changing the N form to one easier to apply in the narrow windows of opportunity last spring. While we hope not to see a repeat of such challenges very soon or very often, this past year reminds us that retailers and producers are up to the challenge of getting N applied even when the weather doesn’t cooperate.

Timing of anhydrous ammonia application in the fall is a major issue, and there is a considerable amount of anxiety related to having to wait until soil temperatures are low enough for safe application. Ammonia and ammonium-containing N fertilizers are the only fertilizer materials that are safer from loss when applied to cool soils than to warm soils. This is because the soil contains large populations of nitrifying bacteria that convert ammonium ions to nitrate ions—this process is called nitrification. As a cation, ammonium ions are attracted to the negative charges on clay and organic matter surfaces; this attraction means that ammonium ions don’t move with water as it moves downward through the soil. As an anion (negatively charged ion), nitrate is not attracted to negative charges in the soil, and so can move downward with water.

Nitrifying bacteria extract energy from ammonium while converting it to nitrite and then to nitrate; in the process, three oxygen atoms are added and hydrogen atoms and water are released. Because this is a biological process, nitrification is sensitive to temperature. The bacteria operate (and multiply) fastest at temperatures in the low to mid-80s, and the cooler it is the lower their activity; the rate of nitrification is close to zero at 40°, and is only about one-fourth of maximum at 50°. This means that waiting until soil temperatures are 50° or less will mean slow nitrification, and once soil temperatures reach 40°, almost all ammonia applied (which converts quickly to ammonium) will remain in the ammonium form—and so safe from loss—until soil temperatures rise.

Since the conversion of ammonium to nitrate stops only at soil temperatures of 40 degrees or less, should we need to wait until soil temperatures are 40° before we apply ammonia in the fall? We probably would if we could, but soil temperatures in central Illinois don’t reach 40 until after mid-November, which in practical terms means that the opportunity to apply ammonia in the fall would be greatly restricted. Another reason is that anhydrous ammonia released into the soil acts as a powerful sterilizing agent: it spreads out into the soil as it changes from a liquid to a gas at the knife, and kills most living things in the soil into which it moves. This means that microbes need to grow back into the depleted application band, and that takes enough time at cool soil temperatures to allow the soil to cool even more before there are enough bacteria to get nitrification back on track.

Another method available to slow nitrification is the use of a nitrification inhibitor. The most common one in use over the past decades is nitrapyrin, which has been in use for more than four decades. The most common trade name for this chemical is N-Serve®, but nitrapyrin is also sold under other names. Centuro®, with the active ingredient pronitidine, is a relatively new nitrification inhibitor from Koch Agronomic Services. These act to decrease the activity of nitrifying bacteria, either by killing the bacteria or by chemically inhibiting their ability to convert ammonium to nitrate. These inhibitors break down in warm soil, and so they are effective for a longer time when applied in cool soils. 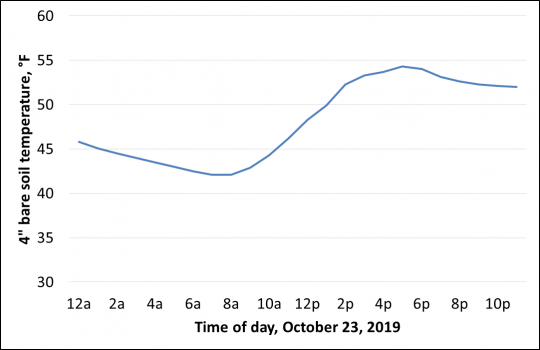 Figure 2 shows the daily maximum, minimum, and average soil temperatures, averaged over six years at Peoria. The daily minimum temperature reached (and stayed below) 50° by October 20, but the maximum soil temperatures at that point were still above 60°, and ammonia applied then would likely have undergo a considerable amount of denitrification over the following weeks. Average soil temperature first reached 50° on October 25, but rose again the first few days of November, and stayed below 50 only after November 6. Almost all of this increase came from 2015 and 2016, when soil temperatures rose to above 60 degrees the first week of November. Although this trend supports the general recommendation that November 1 is the safe date to start to apply ammonia, we can also see that soil temperatures can sometimes rise after that. It may make sense to hold off in a year when soils are still above 50° the last week of October, and warm weather is predicted to continue into November. 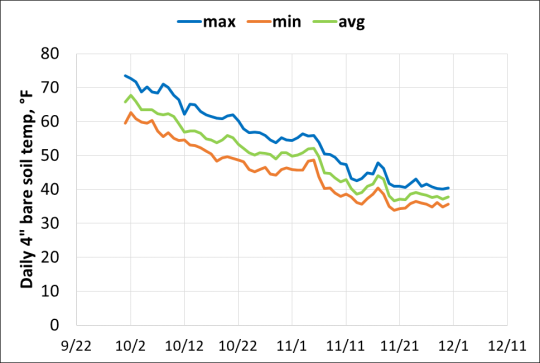 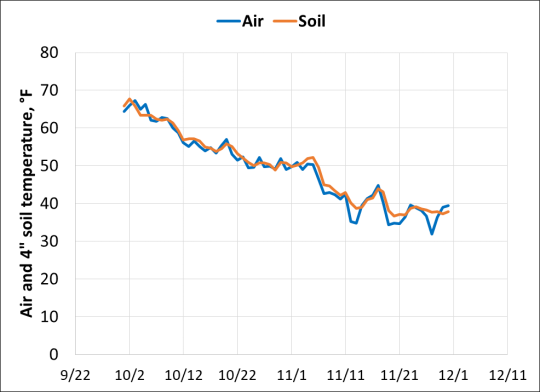 So, will we be ready to begin applying anhydrous ammonia in central Illinois soon? So far this October, soil temperatures at Peoria have, with some ups and down, trended cooler than over the past six years (Figure 4). Even more encouraging, the forecast is for below-normal temperatures to arrive this weekend, at to last into the beginning of November. We can’t know if they’ll rise after that, but if they drop to the mid- or lower 40s by early November, the N we apply should be as safe as we can make it. There’s no special need to rush—the wet weather we had a year ago doesn’t look likely to return soon—but in terms of soil temperatures, there’s no reason why application can’t start during this last week of October. 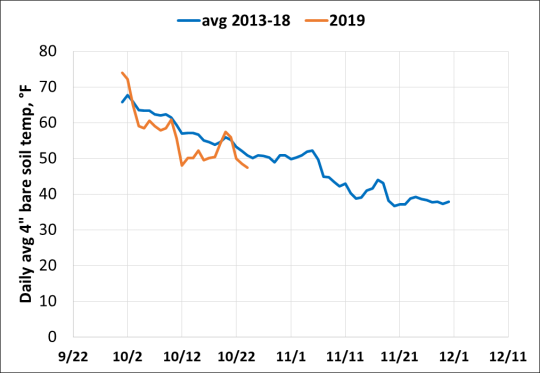 There are a few basics to follow when applying anhydrous ammonia in the fall. Fall ammonia applications should include a nitrification inhibitor. Ammonia should not be applied in the fall south of IL Route 16 (which roughly follows the Shelbyville moraine) because soils there stay warm longer and warm up more quickly in the spring, increasing the chances of loss. Don’t apply fall ammonia on very heavy (clay) soils due to increased chances of N loss from denitrification next spring, or on light-textured soils (sandy loam or lighter) due to increased chances of leaching loss. The N rate calculator, which we will update with new data this winter, indicates that N rates of about 180 in central Illinois and about 160 in northern Illinois are appropriate. If you plan to apply N in any form—MAP or DAP this fall or next spring; planter-applied N next spring, or N solution as herbicide carrier—be sure to adjust the amount of N this fall by applying only the amount needed to produce the total for next year’s crop.

While some in the northern Corn Belt have begun to apply urea in the fall, we do not believe that this is a safe practice in Illinois. Even when urea is protected by polymer coating to slow its release or by inhibitors to slow the conversion of the ammonium that forms as urea breaks down in the soil, the N from urea usually ends up at shallow depths in the soil, and so is vulnerable to nitrification if surface soil temperatures rise. Urea also provides none of the sterilizing effect that ammonia release in the soil provides, and this means that nitrifying bacteria can go to work on the N from urea without delay. It’s certainly possible that most of the N from fall-applied urea can carry over to be available in the spring, but that means that everything has to go just right. Under Illinois conditions, the chances of that happening are too low to make this a safe way to apply N.

Fall Nitrogen Application: What, When, Where, And How