MAPHEX, the shorthand name for a mobile system that removes phosphorus from manure, is steps closer to offering dairy farmers greater flexibility in where, when, and how they use the nutrient to fertilize crops.

The Manure Phosphorus Extraction System is the invention of a team of scientists led by Clinton Church, with the Agricultural Research Service's (ARS) Pasture Systems and Watershed Management Research Unit, and Alex Hristov at Pennsylvania State University's (PSU) Department of Animal Sciences. Both are in University Park, Pennsylvania.

According to Church, an environmental chemist, the system was designed to remove phosphorus from liquid manure and concentrate it in a dried form that's easier to transport—for example, to off-site fields, where it can be spread onto crops in need.

As it now stands, the sheer volume of manure that a dairy farm's herds generate can make hauling the waste impractical or too costly. And only so much can be spread to on-site crops before excess phosphorus begins to run off into lakes, rivers, or other water bodies, imperiling water quality and aquatic life. Indeed, the U.S. Environmental Protection Agency estimates phosphorus runoff from land applications of manure accounts for around 66 percent of impaired water conditions in the nation's lakes and rivers. 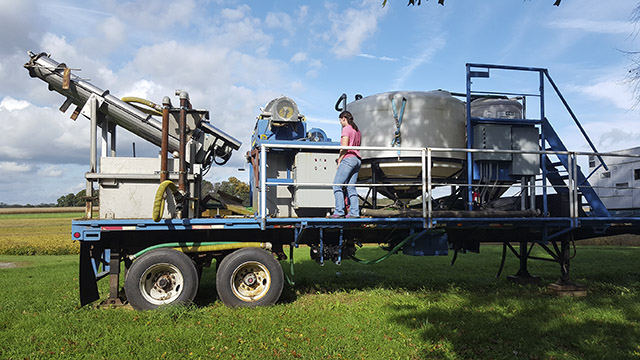 Mindful of the environmental and economic constraints, the team designed MAPHEX to operate atop a flatbed trailer that can be driven straight to where it's needed, namely, the lagoons or holding tanks where dairy farms store liquid manure.

The system, which ARS and PSU share a joint patent on, works in three stages to filter out increasingly smaller fiber particles and other phosphorus-containing solid matter from manure. The remaining water, which contains nitrogen, can be recovered and applied to crops.

Results from field experiments and 2017 demonstration trials at 4 dairy farms with between 90 and 5,500 cows indicate MAPHEX can remove more than 90 percent of phosphorus from 250 gallons in about 10 minutes. (See "Mobile System Removes Phosphorus from Manure," December 2016.)

As the researchers envision it, the system might service 10 small dairy farms (about 100 cows) on a 10-day rotational basis—perhaps through a cost-sharing venture like a cooperative—or be permanently installed in place on a single large farm (2,000-plus cows) on a 24-hour basis. 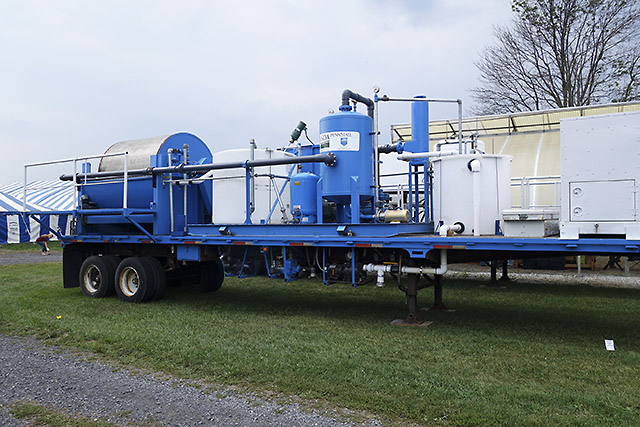 Atop a flatbed trailer is the Autovac unit, the third step in the MAPHEX system. (Clinton Church, D4059-1)

During the 2017 trials, MAPHEX operating costs were about $750 a day—much of that related to the $550 cost of using diatomaceous earth (DE) as a filtering material. But recent improvements could cut the cost to about $125 a day. One improvement is a method for recycling DE that gets another three cycles of use from the material before it must be replaced.

The team also cut system costs by switching to a less expensive chemical and adding a piece of equipment called a disc stack centrifuge.

"Adding the disc stack gets you to 75 percent phosphorus removal," Church explains. "If that 75 percent is sufficient for the farmer, then we've cut the cost from 6 cents a gallon of manure down to about 1 cent a gallon." This gives dairy farmers a wider range of options for removal, depending on their needs and any regulatory requirements that dictate how much phosphorus they can spread on crop fields. Farmers can also recoup some of the operating costs by selling the extracted phosphorus to nurseries or other outlets. 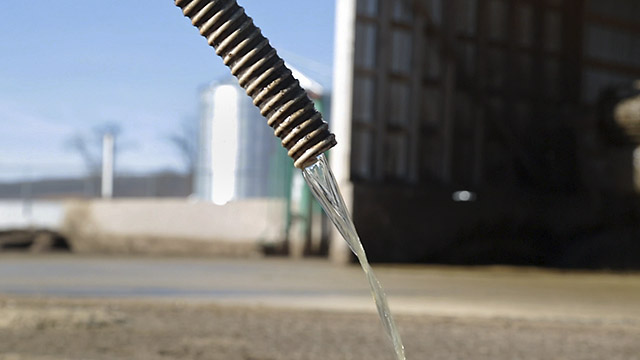 This was manure slurry 10 minutes ago. Processing liquid manure through the MAPHEX system removes 75 percent of the phosphorous and concentrates it into a dried form that’s easier to transport and spread onto crops. (USDA-ARS, D4060-1)

The team has applied for a provisional patent on the DE recycling method and is seeking a commercial partner to further develop the system, which also has potential to remove phosphorus from poultry and swine manure.

How to Avoid Soil Phosphorus Build-Up from Manure