With most farmers in the U.S. still getting into the swing of producing hemp, a price crash may be coming before many can cash out on their crops, according to HempToday. Current estimates show the U.S. market is growing 8 times more hemp for CBD than can be consumed by the market.

Case Nobles, CEO of Kush.com, an online cannabis marketplace, said that prices are dropping on hemp biomass. “With many businesses and farms still just expanding into the industry, the boom in growth is leading to a massive price crash in all forms of the product. Derivative prices continue to drop while many farms are still holding strong on price, which will likely make the crash swift when it happens.” Kush.com estimates the U.S. alone will produce 180 million pounds of hemp biomass in 2019.

Kush.com also reports the average price per percentage point of $3.94 on 10% raw CBD biomass in July was expected to drop to $2.30 for early harvests and could sink even lower in October.

According to an annual survey from VoteHemp, the 2019 hemp growing season saw considerable growth compared to 2018. A total of 16,877 grower licenses were issued for the 2019 planting season (compared to 3,546 issued in 2018), amounting to 511,442 available licensed acres for hemp cultivation this year. 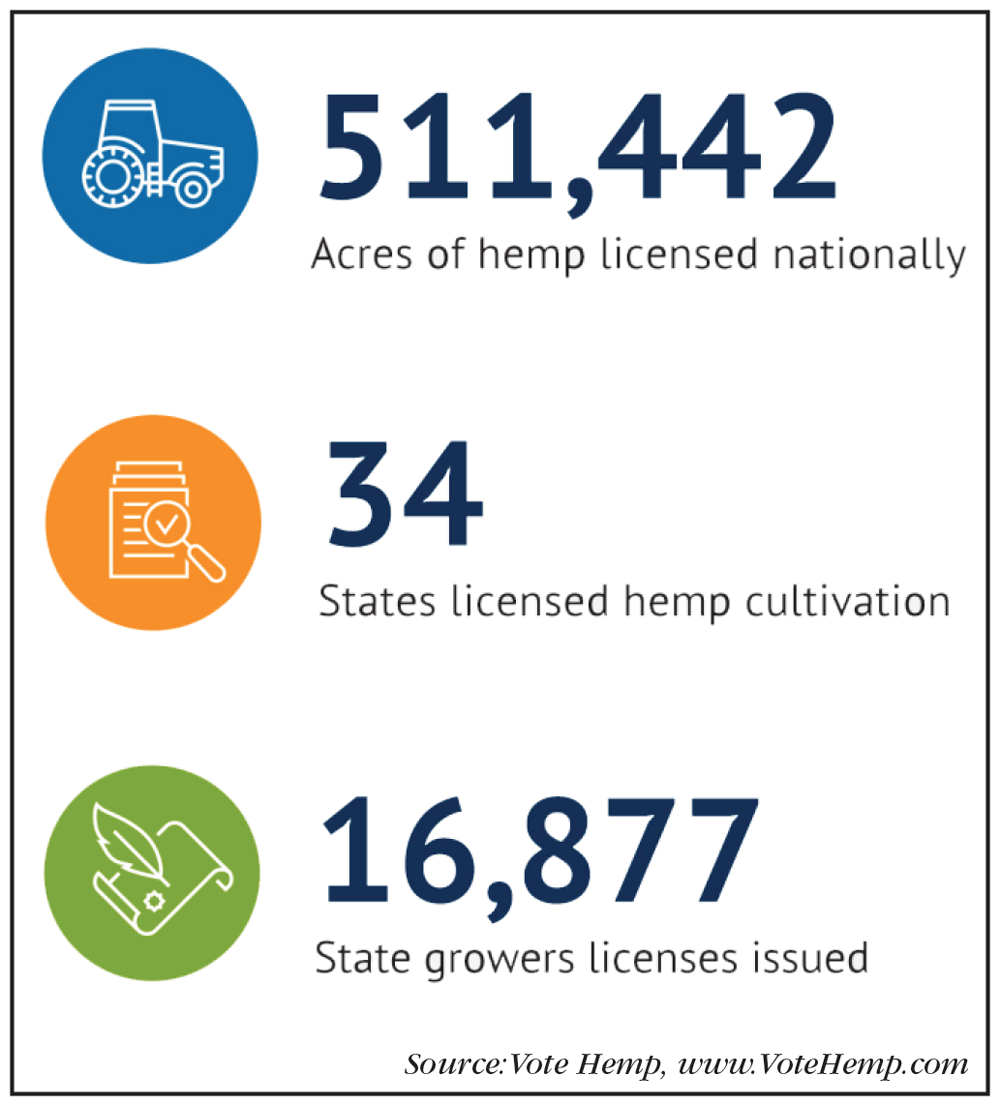 VoteHemp forecasts far more conservative numbers for planted and harvested acres, however, owing to both a lack of access to resources and a general lack of experience in the industry. The late planting season caused by rough weather patterns earlier this year may also have contributed. VoteHemp estimates around 230,000 acres of hemp were planted in 2019. This is expected to translate to between 115,000-138,000 acres at harvest, allowing for crop failure and non-compliant fields.

States also increased the amount of hemp processor licenses they approved, which is needed to perform the most popular procedure with harvested hemp: extracting the oil for CBD. VoteHemp reports that 2,880 processor licenses were distributed in 2019; some states, like Colorado, do not require processors to be licensed, VoteHemp points out, meaning the capacity to process hemp could be much higher.

Other facets of the total infrastructure needed to make hemp viable are still struggling as the potential for a price crash looms. According to PR Newswire, Roger Cockroft, CEO of Delta Separations, spoke on the need for financial support for hemp processors in this new industry, saying, “Big banks ran scared [this year] and wouldn't support infrastructure investments because they heard the word “cannabis,” even though hemp is completely federally legal.” Cockroft predicted that the inability for many processors to finance their equipment purchases could result in a large portion of this year’s hemp crop going unused simply due to “small processing capacity.”