Diseases to Watch for in Flooded Crops

This week’s floods in south-central and central Nebraska have brought up questions about crop growth and development for the remainder of the growing season. One thing producers, consultants and agronomists might want to consider is the potential for disease pressure in fields that experienced flooding this year. Corn and soybean progress varied widely across the area where flooding occurred. As the growing season progresses, scouting is going to become very important in fields affected by flooding. Several diseases are favored by flooded conditions and understanding field history, crop susceptibility and weather patterns can help you anticipate which diseases are likely to occur later in the growing season. 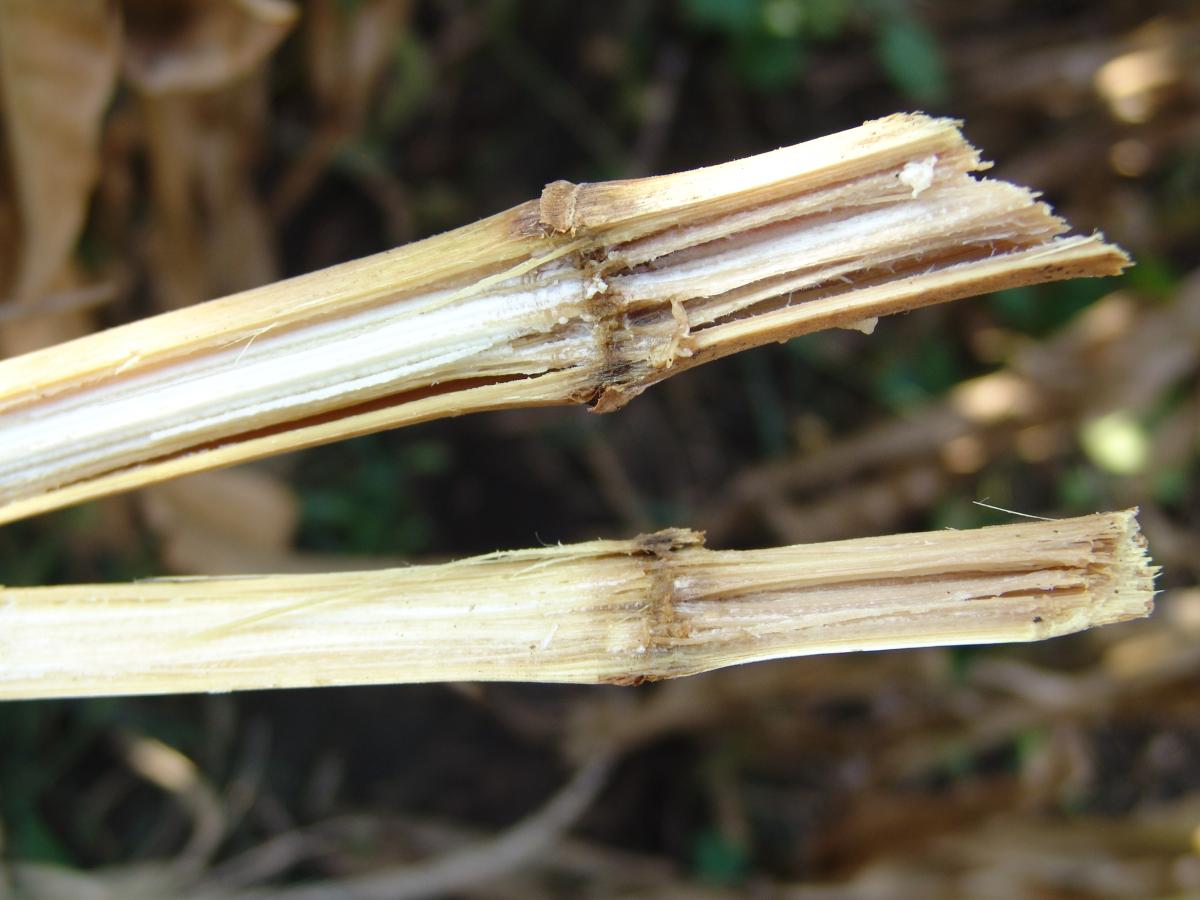 Stalk Rots: Several fungal stalk rot diseases can develop after a flooding event. Stalk rot development is dependent on field history, plant susceptibility, environmental conditions and stresses encountered over the growing season. There is often more than one stalk rot pathogen that infects the plant and each pathogen develops in different environmental conditions. Stalk rot symptoms include gray or brown leaves, decayed and discolored stalks, root decay, lodging and premature death. Some of the most common fungal stalk rots in Nebraska are:

Stalk rots are common in high-yielding hybrids that experience stress, such as excessive moisture or flooding, during the growing season. A corn plant’s primary goal is to produce an ear. To accomplish this, the plant may cannibalize resources from its stalk if it is lacking in nutrients or if foliar diseases reduce photosynthetic leaf area. Selecting resistant hybrids and maintaining fertility programs will help reduce disease pressure. 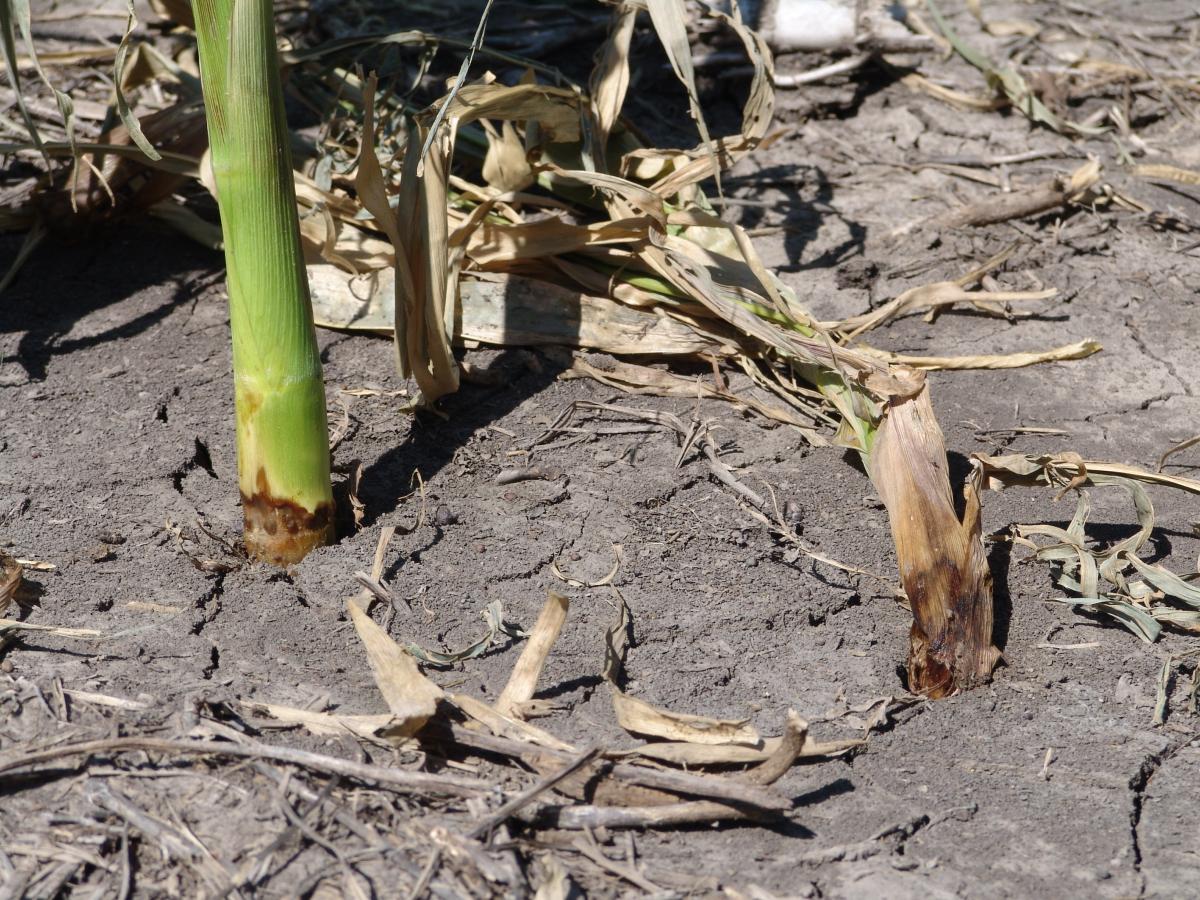 Bacterial Stalk Rot: Several bacteria can be associated with bacterial stalk rot development, but the most common causal agent is Erwinia chrysanthemi pv. zeae. This pathogen can survive in corn and sorghum residue and enter plants via natural openings (i.e. stomata) or wounds (i.e. that may be caused by wind, hail or insect feeding). Symptoms start as discoloration on leaf sheaths and stalk nodes. Lesions then begin to develop on the leaves, leaf sheaths and then systemically up the stalk and throughout the plant. Symptoms are typically associated with a foul odor. As disease progresses, the stalk will gradually rot and the plant will collapse. Splitting the stalks shows a discolored pith and a soft, slimy rot. High temperatures, high humidity, heavy rainfall or overhead irrigation using lake, pond or ditch-water favors disease development. Plants are typically found sporadically in affected fields. Residue management and improved field drainage may reduce disease pressure. Ponding of water in fields, especially during hot weather, can lead to infections in the lower stalk that may eventually lead to plant collapse. 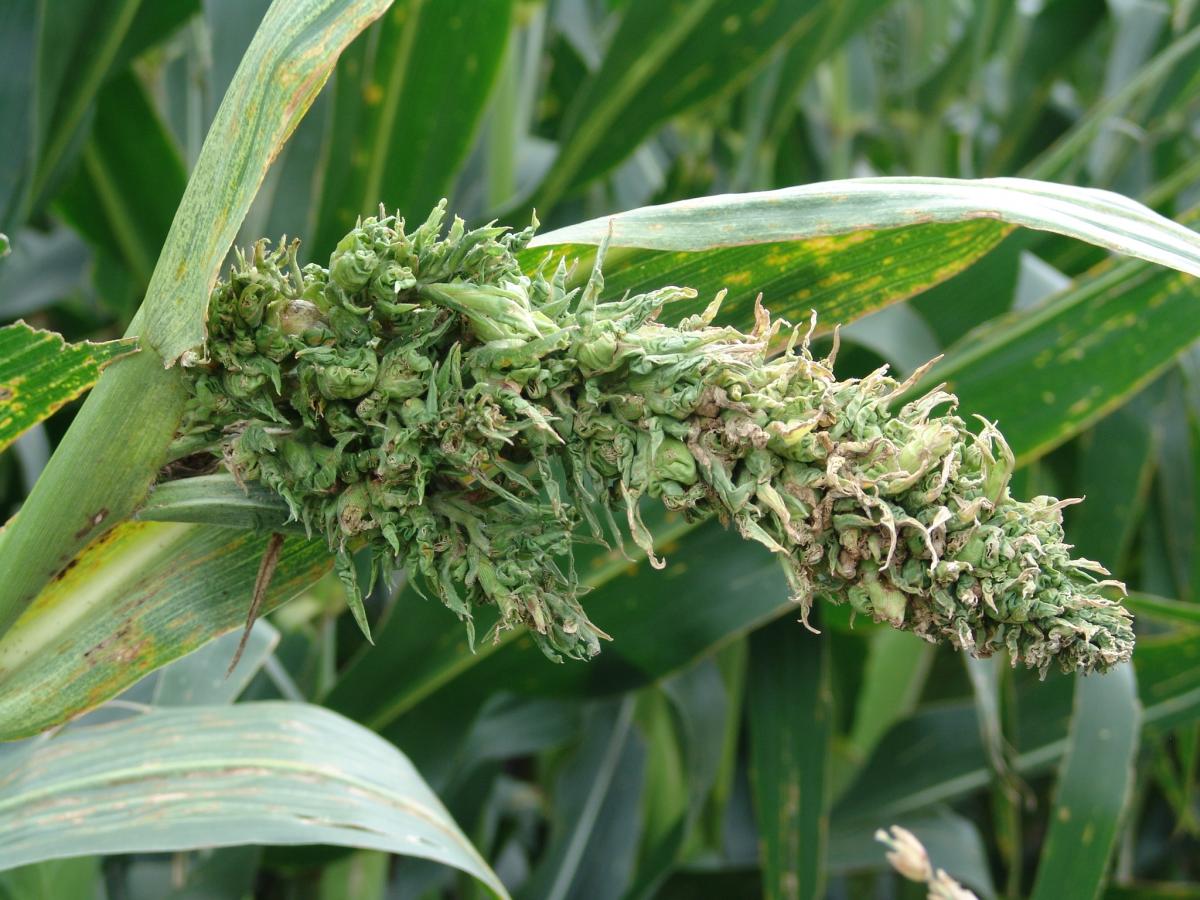 Figure 3. Crazy top disease may develop in corn plants in areas of fields with standing water. Look for oddly shaped tassels (pictured) or ears that may be bushy and with prolific growth.

Brown Stem Rot: Brown stem rot, causal agent Phialophora gregata, infects roots and lower stem tissue early in the season. The pathogen essentially cuts off water and nutrient supply in the plant by impacting conductive tissue. While infection may occur early, symptoms do not develop until the plant reaches the mid- to late-reproductive stages. Symptoms include wilting, brown stems toward the base, lodging, interveinal leaf chlorosis and curled leaves that remain attached to the plant. One diagnostic feature of this disease is brown discoloration with stacked “plate-like” tissue observed inside split stems. Wet soils early in the season and moisture stress later in the season increase disease severity. Genetic resistance and residue management is important for management of brown stem rot. 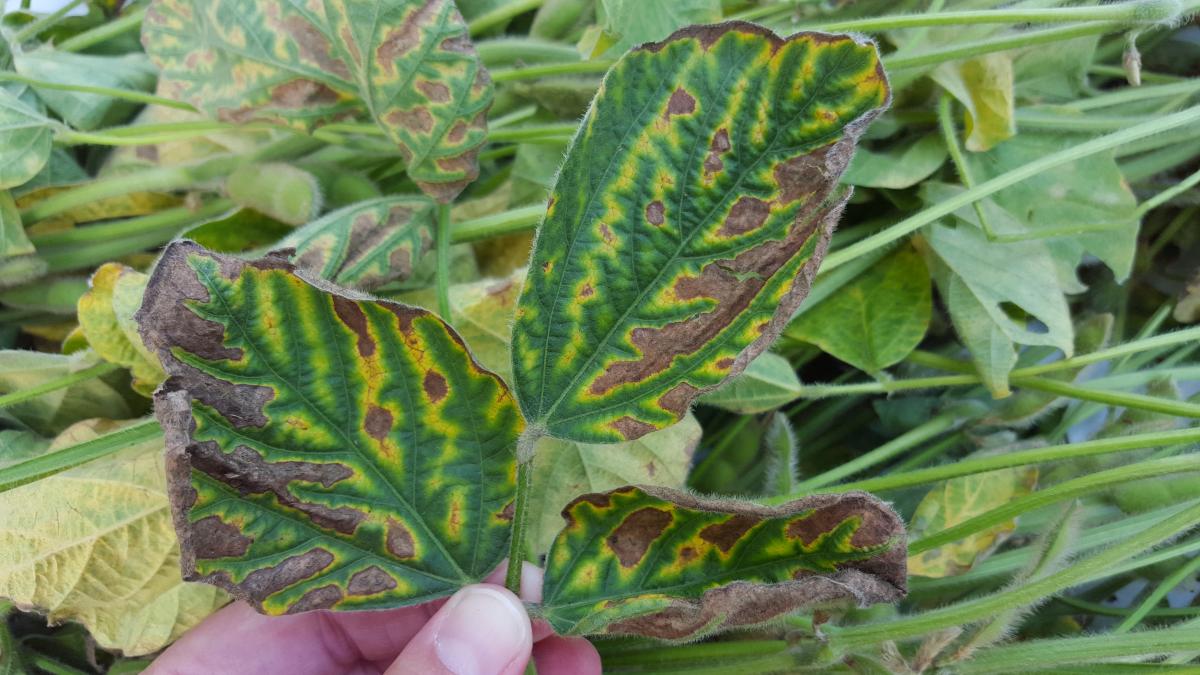 Figure 4. Sudden death syndrome may develop in soybeans affected by heavy rainfall around flowering. The disease can cause root rot, internal stem discoloration, and upper leaves with interveinal chlorosis (yellow) and necrosis (brown) that quickly defoliate.

Phytophthora: Phytophthora root and stem rot is caused by a soilborne fungus-like organism known as Phytophthora sojae. The pathogen survives as resting spores (oospores) in the soil until soil conditions are very wet, allowing these spores to germinate and develop into swimming spores (zoospores) that can move through soil water and infect plant roots. This time of year, we are more likely to see the stem rot phase of disease development instead of seedling disease. Initial symptoms are wilted plants with withered leaves, dark brown stems with obvious lesions extending six or more inches up from the soil line, and dark brown rotted roots. Disease can develop rapidly if soil temperatures are above 60°F with ample soil moisture. It is common to see symptoms develop in patches on compacted or poorly drained soils or soils with high clay content. Genetic resistance (Rps genes), genetic disease tolerance, improved soil drainage and certain seed treatments can help mitigate disease severity. 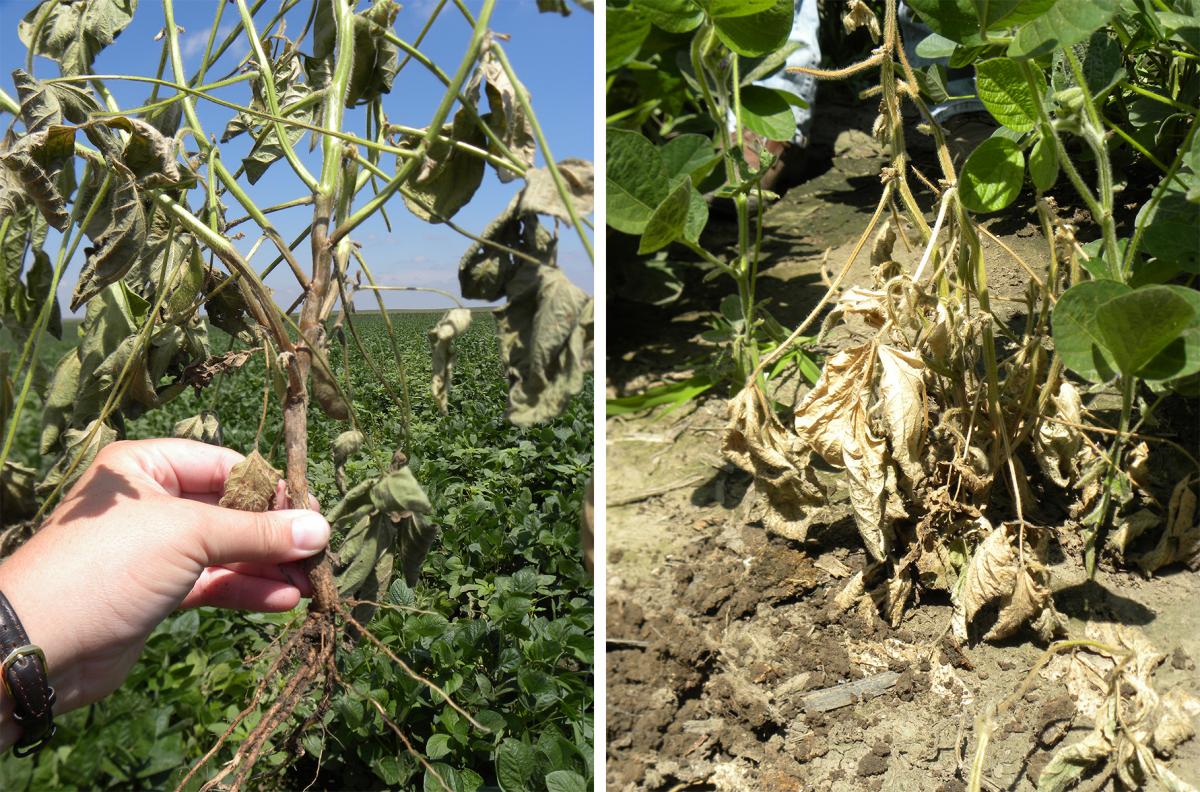