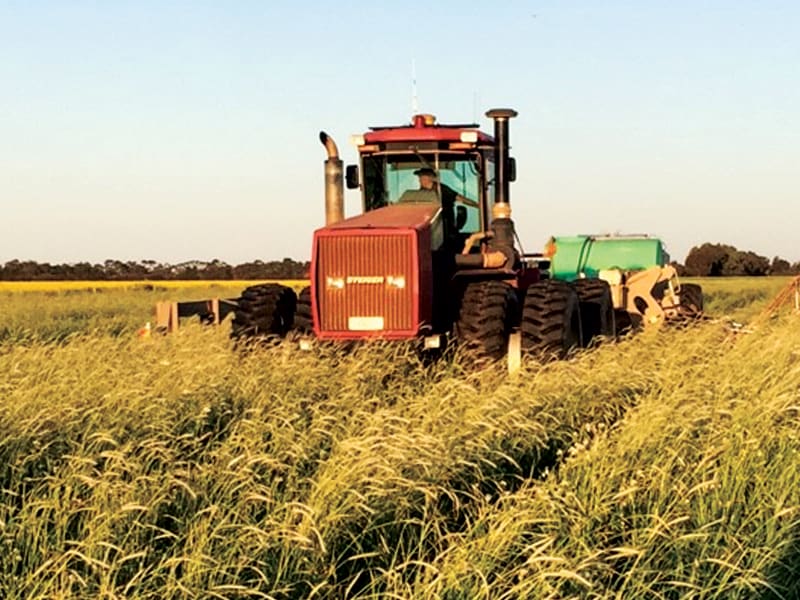 Crop farming “down under” is not that much different from farming in North America. Speaking at the No-Till on the Plains winter conference, Grant Sims, a sixth-generation farmer from north central Victoria, Australia, says his family focuses on soil biology and managing inputs while raising cash crops, year-round cover crops, sheep and cattle on their operation on the Murray River.

Sims’ parents, wife, Naomi, their four children and two full-time employees are also part of the farming operation. The farm has been in the Sims family for more than 140 years.

The Sims farm is 8,500 acres of dryland and some irrigation. Sims farm grows most of its own seed for covers, to keep costs down. The Sims family focuses on crop diversity and companion crops such as canola and beans, wheat and beans, peas and wheat, or summer species. One of the covers seeded is a multi-species mix with 13 different species.

“When we started doing covers, we were doing it as a rotation, as a break crop, then back into the grain crops again,” he says. “We find that if we do consecutive years of covers, with a winter cover, then a summer cover, and then a winter cover again, we can grow a lot of biomass with little inputs. Most of the time, we’re very dominated by winter crops, but if you look at native pastures, they’re about 50-50 summer and winter. This is a way we can get more diversity in with more summer species and…

Premium content is for our Digital-only and Premium subscribers. A Print-only subscription doesn't qualify. Please purchase/upgrade a subscription with the Digital product to get access to all No-Till Farmer content and archives online. Learn more about the different versions and what is included.
KEYWORDS companion crops cover crops on dryland crop diversity energy capture in the soil grant sims