During a candid conversation, strip-tillers discuss the benefits and challenges of relay-cropping wheat in between strip-tilled soybeans going to corn.

Whether a farmer has been strip-tilling for 20 years or just transitioning into the practice, a desire to learn and improve is critical to avoid complacency.

Certain aspects of a system are repeatable year after year. But there are also those subtle, or maybe even dramatic changes, which strip-tillers make to improve their systems.

Ahead of the 2019 National No-Tillage Conference in Indianapolis, we assembled a diverse group of strip-tillers for a candid conversation over lunch, to exchange proven and progressive practices they’ve implemented on their farming operations.

Also at the table were Wanatah, Ind., strip-tiller Jeff Herrold and No-Till Farmer managing editor Julia Gerlach. Look for additional coverage and insights coming from this conversation at StripTillFarmer.com.

Mac Ferguson: “Clint, you mentioned that wheat is part of your cropping rotation and it sounds like you are doing some relay cropping into that wheat. How did you set that system up?”

Clint Robinson: “We don’t have a huge wheat market in our area. Everybody grows corn and soybeans, which is a 2-year rotation. We know the soil benefits of wheat, but I also didn’t want to disrupt my 2-year rotation, too much. I plant a treated wheat with fungicide on 30-inch rows as soon as we get the corn harvested. The strip of wheat is about 6-8 inches wide, and by the end of April, it’s 12-18 inches tall in our area. We then plant soybeans on 30-inch centers in between those wheat rows. 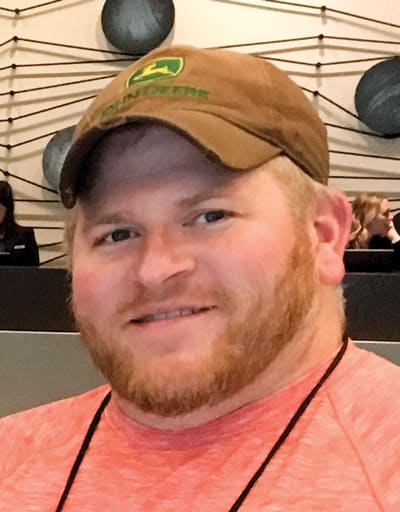 “There’s a lot of fungus growing underneath that wheat residue, which is what we’re shooting for. We want our soil biology to be better and create more active soil…”— Clint Robinson

“Then we’ll spray dicamba over the top of the wheat before it gets to 5 leaves, because after that, we’ll start running into issues of damaging the wheat with dicamba. But depending on when that stage is, we’ve got dicamba-tolerant soybeans, so if it’s too close to planting, we’re still fine. We could use 2,4-D, but dicamba is more effective in our area. In 2018, we mixed some Prowl herbicide in to give us more of a residual and last just a little bit longer.

“Honestly, all we have to do is get our soybeans up about 3-4 inches, and we don’t have any weed problems. We cut the wheat on June 17 and then sprayed over the top with dicamba and Roundup. We clipped the tops of the soybeans a little bit, so we mixed in some Stratego fungicide to help heal those plants. Those were the last soybeans we harvested in September.”

Ferguson: “What populations did you plant?”

Robinson: “For the wheat it was about 600,000 seeds per bushel, which is probably half of what you would seed if you were trying to get a solid stand of wheat. We’re blowing it on top of the ground and our berm builder is on our 16-row Kuhn Krause Gladiator strip-till bar, so we’re just fluffing the soil a little bit, so there’s good seed-to-soil contact. For soybeans, we were anywhere from 120,000-140,000 seeds per acre.”

Ferguson: “Does it hurt the beans much to clip them?”

Robinson: “I don’t know. In our area in 2018, our worst soybeans were just mono-crop beans, which averaged about 72 bushels per acre. Our best soybeans were 94 bushels per acre. Maybe we did hurt them, or maybe it’s because the wheat was too thick. I don’t know exactly why they were 12-20 bushel less, but for that field, I’ll take 60 bushel beans because it’s a lighter soil type. If I can get 60-bushel wheat as well, I’ll take it.

“It seems like a good system. I can go out there and pick up the wheat, and it’s white underneath that. There’s a lot of fungus growing underneath that wheat residue, which is what we’re shooting for. We want our soil biology to be better and create more active soil.”

Ferguson: “So did you plant any cover after that?”

Robinson: “Yes. After we harvested the soybeans, we planted a blend with hairy vetch and clovers ahead of corn. Then we’ll seed cereal rye where the wheat was. We’re trying to stimulate the mycorrhizal fungi all year long. The cereal rye is a host, wheat is a host and corn needs it as a host.”

Ferguson: “Are you growing your soybeans in 30-inches on the strip, or are you 15 inches?”

Robinson: “We went back. We were 15’s for years and in 2018, we went back to 30’s, so we could alternate cover crop rows. It’s going to take some time to develop it, but I want everything to be on the same spacing.” 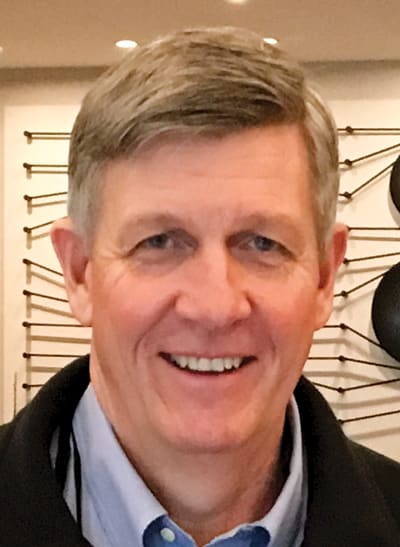 “If wheat is lodged, even if you have the header flat, there’s 10 bushels gone for sure…”— Mac Ferguson

Ferguson: “Will you plant the corn over top of those soybean rows?”

Robinson: “Yes. We’ve got air cylinders on our planter’s row cleaners and we can force that row cleaner down in spring, and it will obliterate that stalk so we can plant right into them. We’re trying to build a fertility strip where we plant our cash crops, both corn and soybeans. In between is our cover crops. We don’t want any fertilizer there. We don’t want to burn out our biology.

“We want to have a strip of fertilizer until we can wean ourselves off of it. Then we want to have a strip where we have covers and wheat and we never touch it. It’s not being disturbed on an every-other-year basis, or anything like that. It’s truly never tilled in that strip. The only thing that gets tilled in our strip-till system is where the corn and soybeans are planted.”

Ferguson: “Do you have good phosphate numbers on your wheat and are you applying any on that crop?”

Robinson: “Typically, we would. The first year I did it, I blended it with diammonium phosphate (DAP) because I knew fertilizer would flow through my Montag system. We’ve since taken DAP out of the mix, trying to lower our input costs, especially on the wheat side. When we applied it, we top-dressed about 30 gallons per acre of 32% nitrogen (N) on the wheat, which I think is a bad idea. We used stream bars and we just did every other row, right on top.”

Robinson: “Five. But at 30 gallons per acre of 32%, we’re looking at 100 pounds a bin, which everybody said I wouldn’t be afraid to do on wheat. But then the soybeans get really lazy because they’re not having to produce N.

“The reason cereal rye works as a cover crop is it stresses those soybean plants initially, because we zapped the N out of our system. The soybeans have to over-produce N because it thinks its deficient. Then whenever we kill it, the cereal rye or the wheat or whatever, we’ve got the nodulation there already. Where we applied N and we planted a month-and-a-half later — even though it was at least 10 inches away — there was still enough there that it didn’t nodulate as much as I think. That may have been where our yield drag was, or at least contributed to it.”

Ferguson: “Did you have any lodging in the wheat, that cost you a lot of bushels? If wheat is lodged, even if you have the header flat, there’s 10 bushels gone for sure.”

Robinson: “Yes. I had a friend riding with me when we harvested the wheat. It made 62 bushels per acre, and he said, ‘Oh, I bet you had at least 70 out there.’ We can’t go low enough to get it when it’s down, because we don’t want to hurt our soybeans.

Although West Union, Iowa, no-tiller and strip-tiller Loran Steinlage has been known for his interseeding prowess, he’s in the middle of shifting much of his 750-acre operation to relay cropping, or what some refer to as companion cropping. It’s the practice of planting different crops in proximity for pest control, pollination, providing habitat for beneficial creatures, maximizing use of space, and to otherwise increase crop productivity.

Many of the modern principles of companion planting were present many centuries ago in cottage gardens in England and forest gardens in Asia, as well as thousands of years ago in Mesoamerica.

“The biggest thing I see on companion cropping is productivity. I want my cover crops paying. When I committed to cover crops, that’s where I started and that’s what I’m going to stay with,” Steinlage says.

2018 was his fourth year of relay cropping on a field scale. He began investigating synergies between different crops planted together several years ago, noting the productive ‘Three Sisters’ plantings by Native Americans of corn, soybeans and squash.

Due to switching to non-GMO corn and soybeans and planting later in 2018, Steinlage interseeded about one third of his acres — mostly corn — with cowpeas and relay-cropped the remaining acres with summer legumes. He typically sidedresses corn with N with his interseeder at V7-V8.

He’s found relay cropping can be very profitable compared to traditional no-tilling methods. A projection 2018 budget he shared showed 30-bushel cereal rye and 30-bushel soybeans, paying at $10 a bushel each, and 400 pounds of buckwheat could make him $660 an acre, which he feels compares favorably to 200-bushel-an-acre corn.

“The scary part is I know we can double those numbers,” he says. “Do I have to farm the world? No, just got to farm smarter.”