Simon Cowell farms at Motts Farm, Southminster, England, on the Dengie peninsula and has seen the benefits of a no-till system.

He manages his farm on a field-by-field basis, using cover crops, making his own compost and trialling different machinery. He has been able to see the impact and success of building his soil health and fertility, while maintaining yields.

In light of uncertainty around future fertilizer costs, he is encouraging other arable farmers to follow his lead and improve their soil health to help with input costs.

Simon farms 400 acres on the Essex coast, and says his soil health has dramatically increased, allowing a reduction in inputs with no adverse effect on yield.

“I no longer use any phosphate and potash fertilizer or seed dressings. I’ve also totally removed growth regulators from my system and I’m using less fungicides, which has really helped my bottom line,” he said.

“This is all due to the fact that my soil biology is working for itself. It’s able to digest and make available all the nutrients that the plants need to grow so I don’t need to add anything extra.

“I’ve achieved this by reducing tillage to decrease soil erosion, including my home-made compost to give the soil biology a boost, and incorporating a wide range of crops into my rotation, which not only improves soil structure, but can also reduce nutrient leeching.” 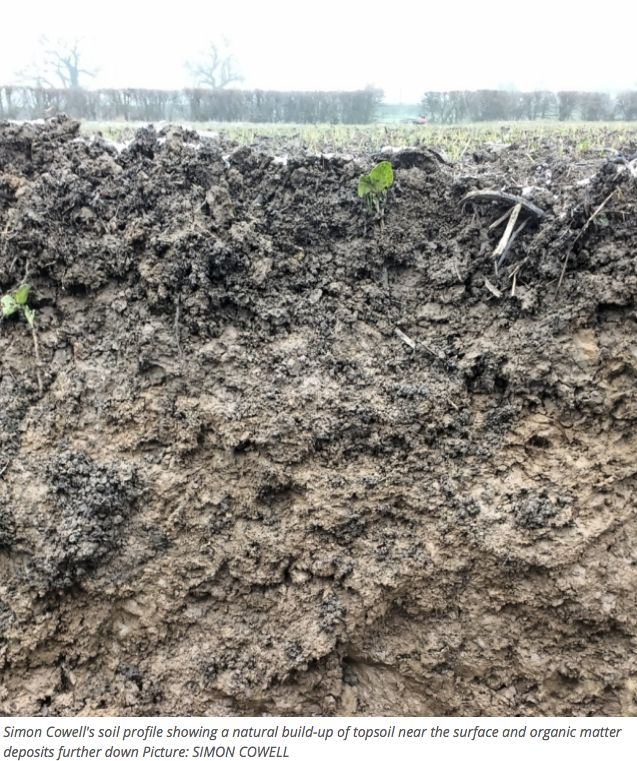 After a visit from his local water company, he became concerned about the amount of glyphosate in his land drains and decided to undertake some trials with the soil stimulant to see if this helped break down the chemical in his soil.

“I found that there was twice as much glyphosate present in the soil that hadn’t had the application,” he said. “So the biological stimulant had broken down the glyphosate in the soil and reduced it by half."

“Including the carbon-based fertiliser with the chemical helps feed the natural bacteria in the soil, which then break down the glyphosate molecules so that they are no longer active.”