Oxbo International Corp. has introduced the 50 Series cornhead, its first cornhead made for field corn producers. Oxbo has designed these new cornheads for commercial field corn harvest, using the same technology as the cornheads that have made them harvesting leaders for the seed industry — with the focus on gentle, efficient ear removal.

Oxbo's Soft Touch technology has been proven in the seed corn industry. A 2008 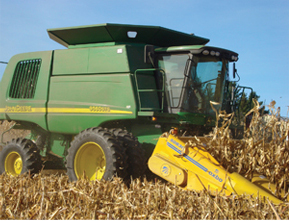 To determine field loss in the study, seed and ear losses were gathered from measured quadrants after the harvester had made its pass. According to Dr. Burris' report, the recovery advantage with the Oxbo 50 Series cornhead ranged from 58 pounds to 430 pounds of seed per acre.

In addition, the study tested two different gathering mechanisms — belts and chains — by configuring identical Oxbo 50 Series heads with each. In this portion of the test, seed recovery was 63% better with the belted heads.

"Our process results in less header loss during harvest. And, reduced kernel loss and less trash entering the combine means a more efficient harvest for the grower.

The knife rolls are made of hardened, chromed steel, and are 24 inches in length and 3.5 inches in diameter. These longer, smaller diameter rolls reduce stalk acceleration into the stripper plates, reducing ear impact and shelling.

"With the new corn hybrids in recent years, residue management has been at the forefront of many discussions," Miller says. "Our system keys on residue management by aggressively crimping and cutting the stalk, which provides uniform stalk conditioning while keeping the stalk attached to the ground for easier fall tillage and reduced wind and water erosion.

"Residue management is an important part of harvest, but we feel the main goal is to get as much corn out of the field as possible. We can help the grower most by maximizing grain recovery."

The Oxbo cornhead also includes a unique row unit frame that is designed to be shorter and narrower through the nose. This gives the cornhead a lower profile without frame damage or ground interference, allowing it to capture the ears that are low to the ground or on downed stalks.

"One of the key exclusive features to our Soft Touch technology are the gathering belts," Miller says. "These deep-lugged, durable rubber belts are easy on the ears in three ways. They're gentle on the crop, significantly reducing shelling; they convey ears more efficiently; and they're quieter to operate than other cornheads on the market."

Other system components include an auto lubrication system, convenient for growers looking for less daily maintenance and better long-term durability of their cornhead.

Getting a Jump on Tough No-Till Weeds