Cover crops have increased in interest and acres planted substantially in the past decade. Indiana has now had three consecutive years of over one million acres of cover crops planted.

While cover crops are beneficial, there is an underlying issue among some of the species being utilized by Indiana farmers. Weed seeds in the cover crop seed.

The Indiana State Seed Lab, which is housed in the Office of Indiana State Chemist, conducts hundreds of seed tests on cover crop seed each year.

These tests include investigations for the presence of noxious weed seed, seed purity, germination, seed count and other quality measures. The vast majority of cover crop seed sources are passing these tests at a high rate.

There is one glaring exception — cereal rye.  Starting with 2016 and continuing through ’17 and ’18 our lab has had higher failure rates on both regulatory and service samples of rye. These results are from over 400 samples tested. Much of the failure comes from locally grown cereal rye seed.

Noxious weed seeds, along with amaranth (many different species including pigweed and waterhemp) and poison hemlock show up in these tests as well (see table below).

In 2018 the average germination rate on cereal rye was just 74.28%, down from 85.04 percent in 2016 (figure 1). The average number of weed species found this year is just over three weed species per sample. When applying a 2 stage filter of seed samples that had germination rates of over 85% and contained no weed seeds, locally grown samples hit that high quality mark in just 11% of the samples, compared to nearly 60% of the professionally grown seed samples.

A 2017 study of 112 samples shows that where the rye is grown influences the quality indicators measured in our lab. Southern Indiana rye had a 75% germination rate, Northern Indiana rye averaged 82% and rye from traditional growing regions such as North Dakota or Canada averaged 90% germination. There are some very good locally grown samples.  But over 23% of all locally grown rye samples had a germination rate below 50%. 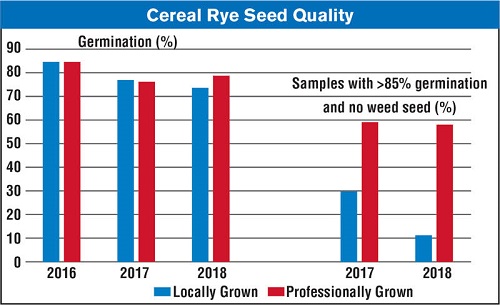 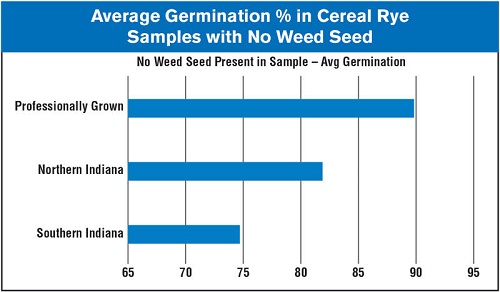 Figure 2. Average germination percentage of cereal rye seed samples that did not contain weed seed samples. Data were pooled over 2016, 2017, and 2018.

Bottom line? It is important to know your seed source and have a copy of the seed lab report in hand before planting rye to avoid unintended consequences of planting additional weeds in your field.