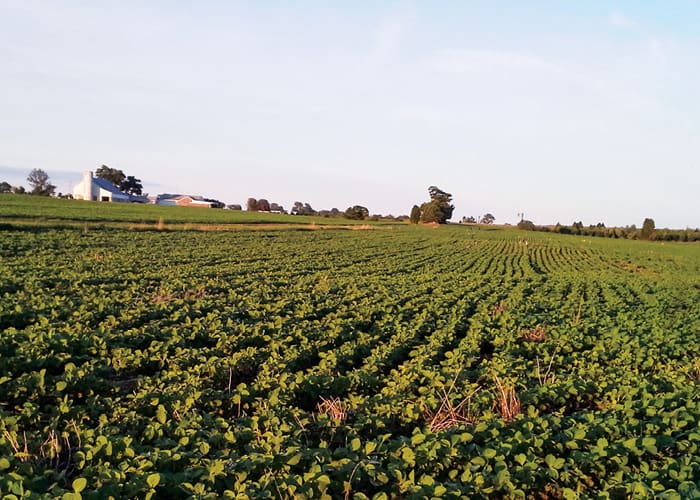 A family that ignored naysayers and embraced no-till practices and living roots is bringing productivity back to tough clay soils and riverbottoms in southern Indiana.

Joe Kern and his father, John, admit they’re still dealing with a learning curve. But through working with no-till practices they’re transforming their “clay pot” soils into acreage that recently produced up to 240-bushel corn and 80-bushel soybeans.

After a long day’s work at a lawn-and-garden equipment dealership, Joe prefers to spend happy hour in his fields with a shovel or soil probe, pulling up and breaking open clods of soil to check rooting and earthworms. He’s learned that roots aren’t just holding the soil, but making the soil.

“When I first started here with no-till we couldn’t hardly find an earthworm on the place,” Kern says.

Joe and John Kern no-till 300 acres of corn and soybeans near Mariah Hill, Ind., on ground cobbled together through family transactions and auctions. They farm their own ground but share equipment.

Some of their soils they farm are what Joe describes as “yellow clay” or “white crawfish ground” that isn’t well drained and only has 1-2% organic matter.

The Kerns also manage a small amount of beef cows, starting out with mixed-breed cows and gradually working toward black angus. They’re just beginning to do some grazing on cover crops, focusing on acres for pasture that aren’t suitable for row crops.

They sell the calves at about 550 pounds as feeder calves. They supplement the cover crops with permanent pasture and hay ground.

The family started no-tilling some of their acreage in the late 1980s and early 90s. As they began…

[Video] Setting Up a White Planter for No-Tilling