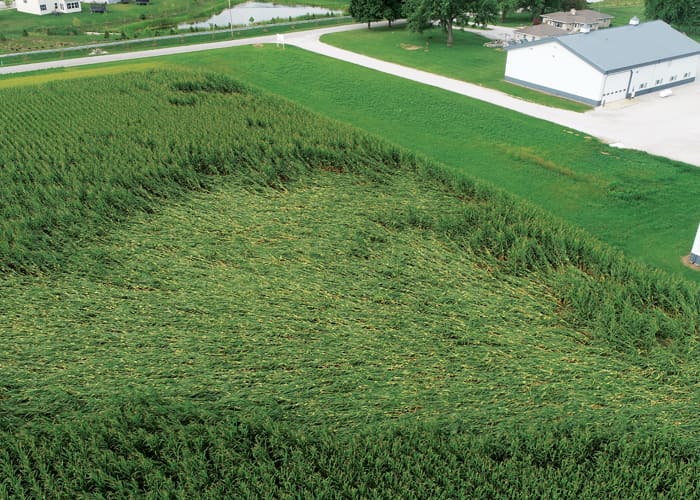 During the summer of 2011, Brownsburg, Ind., corn, soybean and wheat no-tiller Mike Starkey agreed to host the John Deere Roll-Out new equipment event on his farm, leasing out a 75-acre corn plot at the entrance of his 2,600-acre operation.

Dealers from around the world visited to see the release of F-Series Combines and R-Series Tractors over a 2-week period. But soon after, Starkey came to realize the degree to which 95-plus tractors and other various machines compacted the soil.

Factor in the recently added subdivision across the road from the compacted field and the compromised planting conditions were met with drainage concerns.

In the years since the event, Starkey has tried different strategies to reverse the compaction and drainage issues. The first action was using a subsoiler right after the Deere event, but that resulted in chunked up soil with minimal success fixing the compaction.

Starkey’s next step focused on drainage issues, installing 4-inch pattern tiles at 60-foot spacing across the plot with 3 outlets for water to drain out of the field after wheat harvest in 2016.

The process was a pricy one — an estimated $1,000 per patterned tiled acre — but produced successful results with improving drainage rates in the field.

“In addition to the tiles helping the drainage, the annual ryegrass cover crop I’ve planted in the field since the event reduced the compaction significantly.”

Despite the improvements, Starkey says…

Premium content is for our Digital-only and Premium subscribers. A Print-only subscription doesn't qualify. Please purchase/upgrade a subscription with the Digital product to get access to all No-Till Farmer content and archives online. Learn more about the different versions and what is included.
KEYWORDS corn nutrient deficiencies cover-crop mixes crop tissue testing fixing compaction John Deere air seeder no-till vs. conventional till Soil compaction Tile