Ag engineer Paul Jasa shares some actionable information about avoiding compaction issues this fall during harvest to pave the way for planting next spring.

With harvest underway across Nebraska, some producers are concerned about compaction as their large combines and grain carts move across the fields. In some areas, fall rains have left the fields soft and ruts are being cut into the soil during harvest. These ruts leave the soil surface rough and have severe compaction below them. 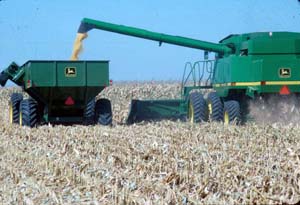 This compaction can impede the crop's roots next season and increase runoff because of reduced infiltration.

If the combines and grain carts aren't leaving a rut, don't worry about compaction from the heavy equipment. Compaction is the loss of pore space between soil particles and occurs when that space is squeezed out of the soil and reappears somewhere else, such as in the form of a rut. If a rut wasn't formed, there was enough soil structure present to support the weight without causing additional compaction.

If ruts were formed during harvest, tillage can break up compaction but the soil must be dry to fracture compaction. If the soil was wet enough to cause ruts, the odds are that it is too wet to do tillage.

Tilling a wet soil causes more compaction as the soil particles are lubricated and easily slide under the weight of the tractor and tillage implement. This compaction is harder to see because the entire soil surface is compacted, even though the surface looks loosened. Deep tilling a wet soil often only cuts slots and smears the soil rather than fracturing compaction.

Producers should practice controlled traffic to reduce the areas in the field with wheel traffic compaction. Eighty to 85% of soil compaction damage is done with the first pass of the tires. If additional passes are made on the same traffic lanes, little additional compaction occurs. Because once a traffic lane has been driven on and the soil has been firmed up, subsequent passes have little effect on the amount of compaction. By using the same traffic lanes year after year, the soil structure and water infiltration in the untrafficked areas greatly improve.

1. Wait until the soil dries enough to support the combine.

2. Don't use grain bin extensions or fill the combine as full.

4. Keep trucks out of the field. Consider unloading at the ends of the field, not on the go.

5. Grain cart should track the same rows as the combine.

6. Don't turn around in the middle of the field.

8. Establish a grain cart path and stay on it.

9. Don't till wet soils as they are easily compacted.

Controlled traffic lanes improve traction, soil load bearing, and timeliness of planting and harvesting operations while minimizing potential yield reduction from compaction. Compaction is managed, not eliminated, and the area subjected to compaction is minimized. 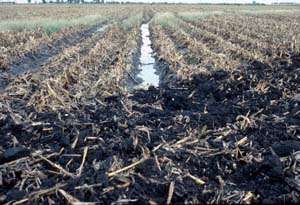 If the soil was wet enough to form ruts during harvest, it's probably too wet to do tillage. Driving on or tilling a wet soil causes compaction. While the wheel traffic compaction (loss of pore space) is easy to see as the lost space reappears as ruts, the full-width compaction resulting from tillage isn't as visible as the entire surface is compacted below the tillage depth.

The concept is to separate traffic zones from root zones. Controlled traffic keeps compaction where it is less detrimental to root development and uptake of nutrients and water. Fertilizer placement and furrow irrigation practices can be modified as these traffic zones are established and the traffic lanes are known.

To minimize wheel compaction at harvest time, grain carts should be following the same tracks as the combine. A lot of grain cart drivers think they should move over a few rows and spread out compaction, but this will only compact more of the field. Likewise, grain trucks shouldn't be driven in the field as the axle loads and tire pressures are not suitable for soils.

If ruts were cut at harvest, wait until the soil is dry to smooth them out to avoid causing additional compaction. This smoothing operation may be a light tillage operation next spring before planting. Deeper tillage in the spring will usually cause more compaction as the soil is wet and the tillage will break up soil structure.

Here are more articles on the No-Till Farmer website to help you beat compaction problems this fall:

• Tire Tips and Other Practices for Reducing Soil Compaction

• Use Cover Crops to Alleviate Compaction Tire Tips and Other Practices for Reducing Soil Compaction