From Maverick to Mainstream: A History of No-Till Farming is a beautiful full-color, hardbound book including over 400+ pages, 650 photos and another 125 visuals.

Think back to a time before there were aerial drones, genetically modified crops and no-till wasn’t a well-known tillage practice. Fast-forward to today and no-till has been proven effective for most regions and soils and thousands world-wide have since adopted the practice. While there are still new-comers jumping off the plow with each new production season, the history of no-till has been a long time coming.

From Maverick to Mainstream is a chronicling of the personal history that Frank Lessiter saw from the near-beginnings, as the 1st and only editor of No-Till Farmer since 1972. The concept of no-till farming was still in its infancy at that time, just 10 years after one “crazy” farmer in Kentucky, Harry M. Young, tried it out on less than 1 acre. Harry’s son, John Young, remembers, “…I was 11 years old then, and didn’t recognize the huge changes that were about to take place in farming… Back in the early days, Frank flew down to our western Kentucky farm on more than one occasion to visit with my father. He was a keen enthusiast for no-till from the beginning, and remains so today.”

“This book has intrigue, conspiracies, spies, strong-arm tactics and other shenanigans amid the search for the truth about no-till..."

From Maverick to Mainstream: A History of No-Till Farming contains numerous short items “from the archives” of No-Till Farmer issues and 56 chapters including:

When you hold the book in your hand, you’ll see that this volume is much more than just a history book. It covers the people and their trials and successes. It will surely be of interest to everyone in agriculture, but also to anyone who enjoys celebrating and cheering on early adopters and underdogs who changed the world. It serves as a lasting reminder of how innovations, and their determined personal champions like those profiled in the book,can still make a difference — through grit, learning and sharing, and the encouragement and support of others.

Order today to get a copy personally signed by Frank Lessiter. With 40-plus years of archival articles, photos, comic strips, ads and infographics, this stunning collection is the perfect gift for any admirer of American innovation.

Unboxing From Maverick to Mainstream 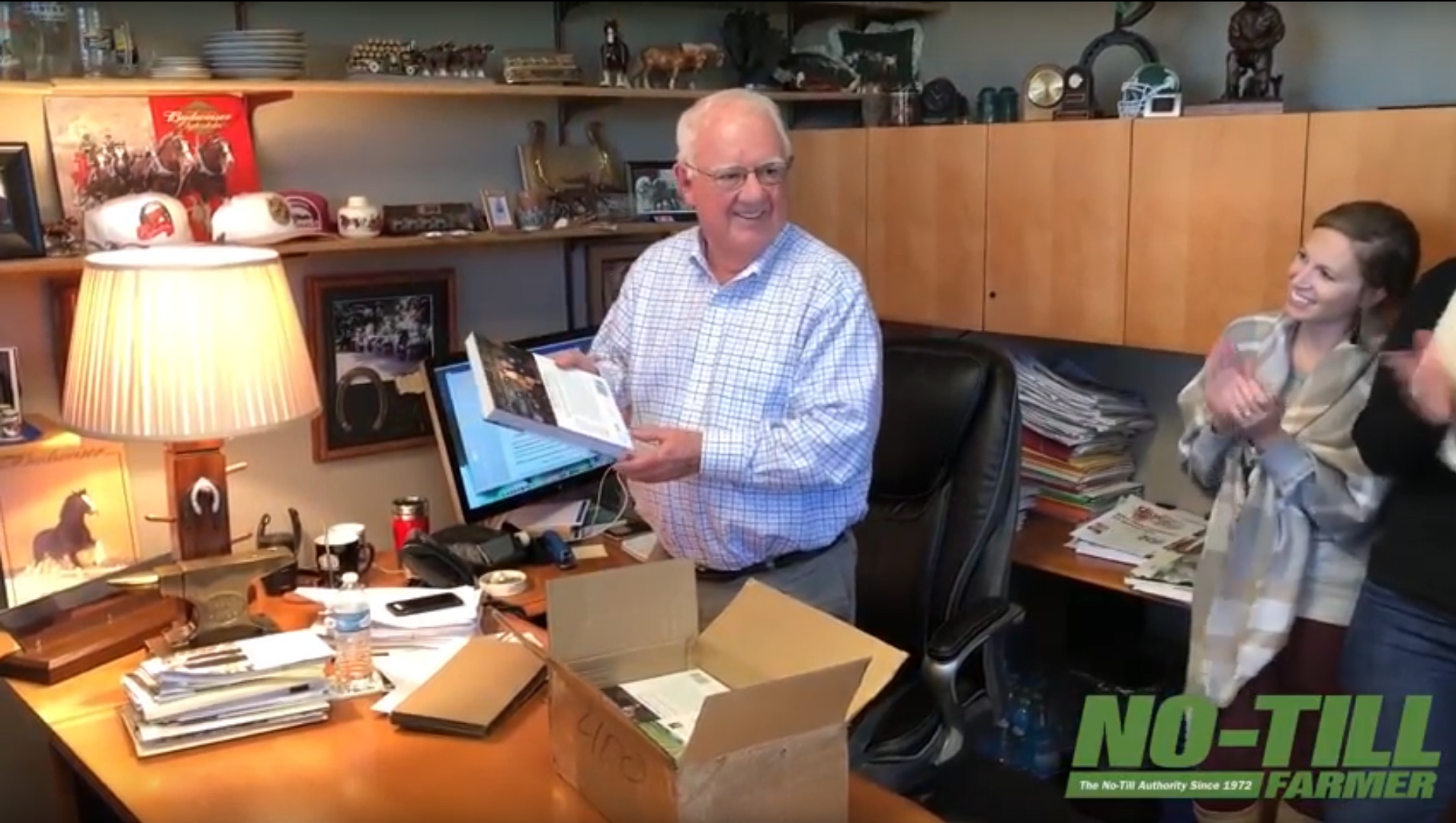 In this video watch Frank’s reaction as he holds his 416-page collection of No-Till Farmer archives that took almost 19 months and over 40 years of memories, hard work and no-till pioneering, to publish.

Frank Lessiter, is also the chairman and editorial director of Lessiter Media, Inc., an agricultural based media company he and his wife Pam founded in Brookfield, Wis., in 1981. Spending his career as an ag journalist, Frank is an award-winning writer, photographer and has been the editor of No-Till Farmer since the very first issue in 1972. He has been recognized by numerous organizations for the adoption of conservation tillage in the U.S. Frank has received awards such as the Outstanding Service to No-Tillage Award in 2015, the S.H. Phillips Distinguished Lecturer in No-Till Agriculture Award in 2011, and numerous writing and photography awards from the American Society of Business Press Editors, Newsletter Clearinghouse, as well as AAEA Farm Publications Editor of the Year and Photographer of the Year.

[Video] The Unboxing of From Maverick to Mainstream: A History of No-Till Farming