There Are Many ‘Ifs,’ but Discovery of Self-Fertilizing Corn Could Transform Agriculture

Farmers in a small area of southern Mexico knew that a variety of corn grown in the area was special.

But a group of researchers — including a contingent from the University of Wisconsin-Madison — believe the corn could ultimately transform the way the largest crop in America and the world is grown.

The potential improvements in water and air quality — not to mention financial savings — are staggering. In fact, the lead researcher from Madison acknowledged that he and his colleagues spent a decade studying the corn before going public this month because the conclusions were "almost outrageous."

And, like so much research in its early stages, there are still a lot of "ifs."

But scientists at University of Wisconsin-Madison, University of California-Davis and Mars (yes, the candymaker) have determined that farmers in Oaxaca, Mexico, have been growing corn that creates its own fertilizer for centuries if not millennia.

Understanding the process requires a short course in biology.

The plants in Mexico have bizarre fingerlike roots sticking out of their stalks. The roots secrete a goopy mucus, in which bacteria live. The bacteria take nitrogen from the air — which plants can't use — and convert it to a different form of nitrogen that they can use. The plants soak up the fixed nitrogen in the gel through the fingerlike roots. 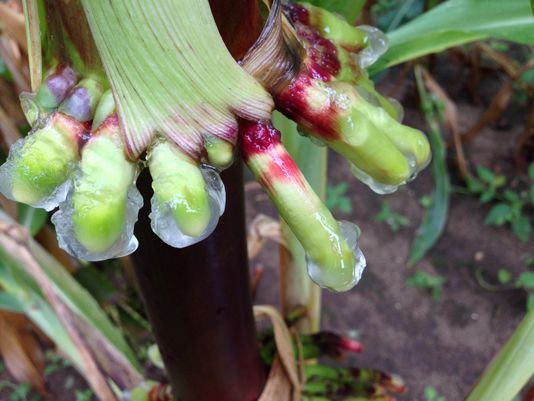 Stubby roots grow on corn stalks brought from Oaxaca, Mexico, to a lab in Madison. The roots create gel that ultimately helps the corn fertilize itself. (Photo: Courtesy of Jean-Michel Ané)

The nitrogen is a critical nutrient for all plants; it's the primary ingredient in chemical fertilizers.

The process is part of a cycle. The bacteria live on carbon, which the plant supplies in the form of sugar. The sugar is produced through photosynthesis. Through this odd trade agreement, the plant gets usable nitrogen, the bacteria get necessary carbon and both parties are happy.

Nitrogen fixation is best known for occurring in legumes like soybeans. The bacteria live in their roots and the surrounding soil. But this had not been demonstrated in grasses like corn.

A Decade of Research

The researchers found out about the corn from Howard-Yana Shapiro, the chief agricultural officer at Mars and adjunct professor at UC-Davis. Decades ago, he had the idea to look for unusual traits in crops that traditional farmers have adapted to their particular climate and soil. He hoped to find something that could improve crops globally.

When Shapiro came across 16-foot tall cornstalks growing on an Oaxacan mountain slope where nutrient levels and fertilizer availability should have been low, he knew they deserved a closer look.

Jean-Michel Ané, professor in the UW-Madison Department of Agronomy, has been involved in the project since 2010. “They came to me and asked if I thought it was possible that corn could be associated with nitrogen-fixing bacteria, and I thought, no way.”

The research group first collected samples from cornfields in the Sierra Mixe area of Oaxaca in 2010. When they noticed the goopy aerial roots, “We were like, that’s weird,” Ané said.

They tested the goopy gel, and it tested positive for one of the byproducts of the nitrogen fixation process.

The answers were yes, yes and yes.

“It took us several years to convince ourselves that it was true. That’s why it took us almost 10 years to publish that paper. It’s a big claim. We wanted to be sure,” Ané said.

Researchers have spent decades trying to get corn to create its own fertilizer by partnering with nitrogen-fixing bacteria, with no luck. But these new findings show that nature had already given corn that potential.

The researchers decided to essentially turn back the clock and examine a type of grass native to Mexico and Central America thought to be the ancestor of corn. In the same way that modern dogs were bred from ancient wolves, corn had been bred from teosinte.

They looked at species of teosinte to see if any had signs of the gel or the nitrogen-fixing bacteria that the Oaxacan farmers could have amplified over time, just like Midwestern farmers later amplified traits like kernel size and uniformity.

"I see this as a good argument for preserving biodiversity," said Chase Mendenhall, tropical biologist at the Carnegie Museum of Natural History. "Nature had innovated something we would never be able to innovate. The lab couldn't have developed that on its own."

The researchers found that the Mexican corn gets 29% to 82% of the nitrogen it needs from this partnership instead of the soil. Its nine-month growing season and other traits mean it's not ready to grow as-is worldwide. But if that trait can be bred into other corn, it would mean an equivalent reduction of nitrogen fertilizer use globally.

Christopher Kucharik is associate professor and department chair of the UW-Madison department of agronomy. Not involved with this research, Kucharik studies agriculture issues related to land management, climate change and sustainability. He said the study has the potential to be a watershed moment.

Kucharik said that some people argue the energy use that will be saved from reducing fertilizer use on corn is “only” 1 percent to 2 percent. “But any little bit helps. There’s no silver bullet to reduce our energy use. If we can come up with 30 or 40 things that each reduce our energy use 1%, that’ll add up.”

He said the biggest impact locally, if Wisconsin farmers could dramatically reduce fertilizer use, would be to water quality. Less than half of the nitrogen in crop fertilizer is actually used by plants; the rest ends up in groundwater or runs off into waterways.

The EPA reports that 1,200 square miles of Wisconsin’s groundwater have nitrate concentrations above 5 mg/L, half of the maximum contaminant level allowed by the EPA. Almost one-third of Wisconsin residents get their drinking water from groundwater wells. Of the new research, Kucharik said, “It’s pretty encouraging and could be a game-changer.”

Credit Where Credit's Due

Samples of the corn are now back in labs at UW-Madison, where Ané and his colleagues are putting it through more tests.

Ané said the people of Sierra Mixe agreed to the researchers publishing the findings and that the Mars company is working to make sure they are protected and will benefit from the discovery. “They and their ancestors are the ones that did the breeding to amplify that trait,” emphasized Ané.

“The people have a strong cultural attachment to that corn and they’re proud of that corn. One interesting fact not in the (published research) paper is the farmers who are there actually collect the gel and keep it in their homes in jars. They use it in various rituals. They know that the gel is special — the more gel the corn is producing, the better the corn is producing.”

How Many Acres Of Corn And Soybeans Are Needed In 2011?

Soybean Prices Tumble, But There Are Some Positive Developments