Our soil is alive, and a healthy soil supports a diverse microbial community that can contribute to the natural suppression of pests – either directly by causing disease in insects, or indirectly, by changing the quality of the crop as a food plant for insects.

Pathogenic fungi that cause disease in insects, are one type of microbe living in the soil. Some of these fungi can also grow in plants, where they have several beneficial effects. 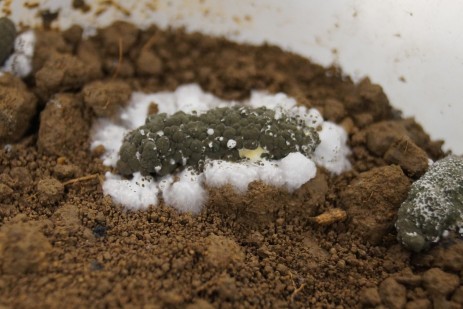 They can provide natural control of insect pests, promote crop growth, and protect crops from disease-causing organisms and plant-feeding insects. They also promote crop growth by helping with nutrient absorption, especially nitrogen. These functions are especially important on organic crop farms, because synthetic pesticides and fertilizers are not allowed.

Metarhizium is a common insect-pathogenic fungus in agricultural soil (Figure 1). Metarhizium can also grow inside plants (as an endophyte) and on the outside of roots where it can induce resistance to insect pests and/or plant disease. The occurrence and diversity of this beneficial soil fungus are being examined under different conditions as part of a larger ongoing research study that examines the benefits and trade-offs associated with cover crop mixtures.

The relative amounts of Metarhizium were determined in soil collected from 8 organic agronomic crop farms across PA and NY. The larvae of the greater wax moth (Galleria mellonella) are very susceptible to infection by insect-pathogenic fungi and were used as a sentinel insect to detect Metarhizium in the soil.

The soil samples were collected and assayed before cover crop planting in fall 2016 (baseline), and again before and after cover crop termination in spring 2017. The cover crops were followed by field corn. Detection of Metarhizium among the farms’ baseline soil samples varied from just over 10% to nearly 60% of sentinel insects infected in about 2 cups of soil (Figure 2).

The frequency of Metarhizium detection was also studied in standard and customized cover crop mixtures at the same 8 farms. Both mixtures are composed of the same 5 species (canola, Austrian winter pea, crimson and red clover, and triticale) but differ slightly because each farmer customized or “farm-tuned” the seeding rates of each species in the mixture to meet the specific goals for their fields. A standard mix was also included at each of the farm sites as well as at the Russell E. Larson Agricultural Research Center at Rock Springs (AKA: Rock Springs). 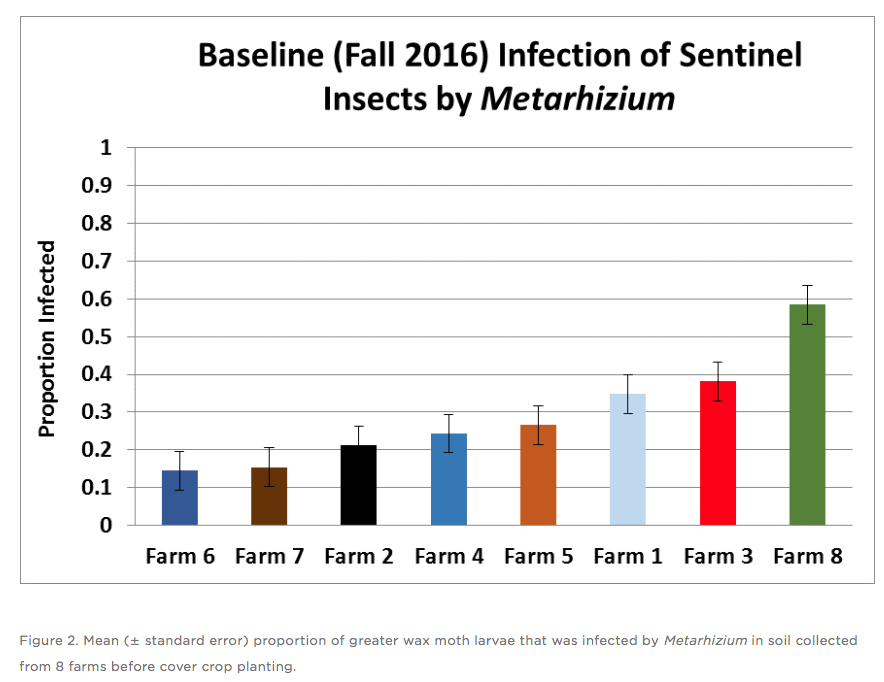 In spring 2017, the frequency of Metarhizium detection varied among the different farm locations (Figure 3). Among the eight farms, three farms showed higher Metarhizium infection in the custom mix, whereas the remaining five farms showed nearly equal amounts of Metarhzium infection in the custom and standard mixes. The causes of variation across mixtures, farms, and time are still being determined but we suspect that this fungus is not strongly affected by the proportions of the 5 cover crop species in the mixture, but may be more strongly influenced by environmental factors. 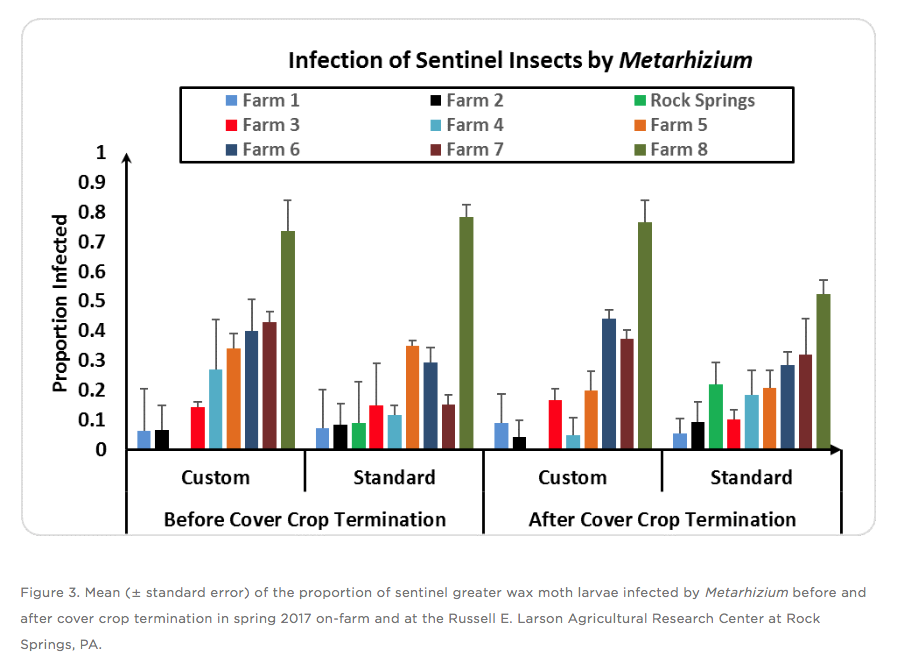 Magnesium is thought to enhance the biological activity of insect-pathogenic fungi in soil and the enzymatic break-down of the insect cuticle. Other research found that applying Metarhizium to cowpea foliage increased the Mg concentration in roots and leaves of the crop. Increasing soil pH can inhibit fungi, including Metarhizium, by favoring bacteria, which can out compete fungi in soil.

Conservation of natural enemies of pests is important on any type of farm – organic or conventional. Based on our results so far, and those from other experiments at Rock Springs, we expect that the relative abundance of Metarhizium is mediated by some factors that are amenable to management, for example, planting winter cover crops (generally help conserve and support), soil fertility (soil Mg favors), and soil pH (neutral to acid pH favors); and some that are not, namely, climate (longer growing season allows greater build-up). We are continuing to conduct research to understand if and how the relative abundance of this fungus is associated with corn and cover growth and yield, and on the growth of insect pests and plant-pathogens on corn that has been grown from seed treated with this fungus.

Are Soil Nematodes Beneficial Or Harmful?