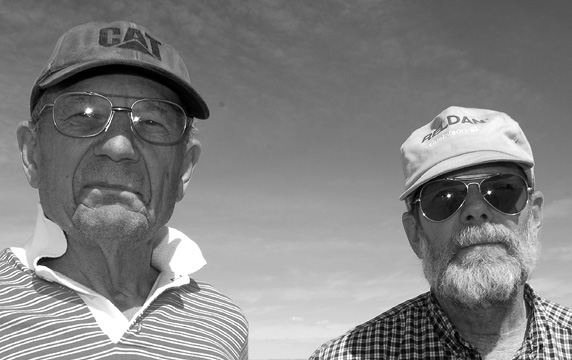 By Martha Ostendorf posted on April 1, 2009 | Posted in Soil Health

Arnold Gettel first tried no-till in 1969 and has seen soil structure and dryland yields improve as a result.

“Years ago, I got lazy,” jokes Montana no-tiller Arnold Gettel of why he first tried no-till. While fewer hours in the tractor seat was a legitimate appeal for Gettel, the economical benefits are really what drove the transition.

“Since switching to no-till, we’ve saved money in fuel, maintenance on tillage equipment, reduced wear on the tractors and we need fewer man hours to run the operation,” Gettel says. “Plus, we’ve seen better yields with no-till and great improvement in the soil structure.”

“It was a 10-foot, double-disc no-till drill and it didn’t work well on our land,” Arnold recalls. “Little rocks would lodge in the disc and it would stop turning and start plugging.”

He soon moved to a Melroe drill with 3-row openers and 12-inch spacings, which moved through residue better. In 1995, the Gettels invested in a Flexi-Coil air drill.

“Some of our ground is very mellow, but we have some soils that are very high in clay and will get pretty hard, especially in the fall when we drill winter wheat. That’s part of the reason we went with the air drill,” David says. “The hard ground was tough on other drills and that meant doing a lot of maintenance.

“With the air drill…

Premium content is for our Digital-only and Premium subscribers. A Print-only subscription doesn't qualify. Please purchase/upgrade a subscription with the Digital product to get access to all No-Till Farmer content and archives online. Learn more about the different versions and what is included.
KEYWORDS Arnold Gettel barley Dryland Flexi-Coil Great Falls lentils Melroe drill Montana peas spring wheat Winter wheat