In addition to efforts already under way in parts of the northern Plains, Alabama growers are now sowing the seeds of a new biofuel oil crop this winter. Carinata is similar to canola, a crop many producers introduced to rotations several years ago.

An oilseed crop, carinata seed is larger than millet and smaller than sorghum. Canola was grown and crushed for food-grade oils, but carinata is a non-food, biofuel oil. The remnants of carinata seed—a feed meal—will provide the livestock industry with a high value protein supplement in feed rations.

“Row crop producers are always looking for opportunities to increase productivity,” Hicks said. “Many of the growers who have contracted carinata acreage sought alternatives to solely growing winter wheat. The crop is a great addition to rotations that will allow producers to diversify their winter income.”

Dr. Jeff Klingenberg, the vice president of agronomy and plant breeding at Agrisoma Biosciences, said the company’s goal is to have carinata fit seamlessly into producers’ existing rotations.

“Carinata is a very hardy crop,” Klingenberg said. “It is more drought and cold tolerant than canola, making it a good choice for producers in many areas of the U.S. Producers will always need a crop rotation. Growing carinata allows those acres to remain in production and helps to break the pest cycle.”

Carinata is high in glucosinolic acid, a natural deterrent for nematodes and other pathogens and insects. The crop’s adaptability to different environments is also beneficial. While carinata is a cool season crop in the southern states, it is a summer crop in several Midwestern states. Klingenberg said one of the draws to carinata production is the ability for the plant to thrive in many environments, while also providing the advanced biofuels industry with a consistent feedstock supply. 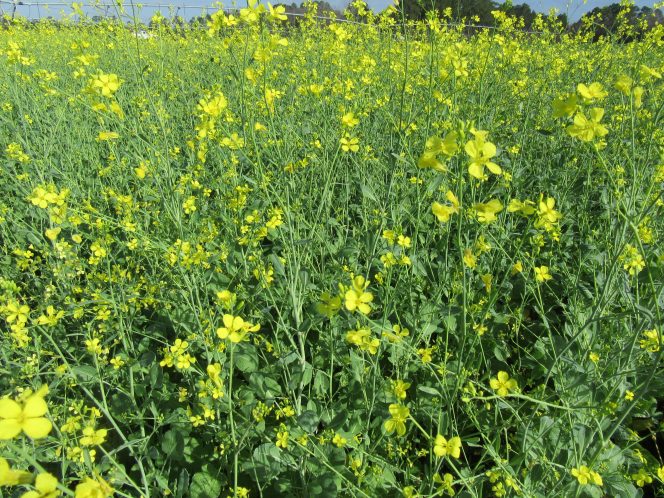 Klingenberg said the oil markets are in need of a backbone source of oil for jet fuel.

“Carinata is high in erucic acid which is good for fuel and not for food consumption,” he said. “Carinata has a longer carbon chain fatty acid profile than canola, and improves efficiencies in fuel conversion processes.”

This crop differs from other oil sources in efficiency, ease of use and makeup. Carinata oil has no water separation in storage, is ready to use, has a lower freezing point—meaning higher flying for jets—and has potential to produce 50 percent less carbon emissions when used than petroleum fuel.

The numbers are encouraging, and Klingenberg said this is something his company has worked toward for many years.

“We work to supply carinata grain that meets the requirements of jet fuel, and advanced bio-diesel processors regarding levels of efficiencies that make the product worth it,” he said. “For the market to work, carinata needs the value-added factor. Carbon sequestration and the reduction of greenhouse gas exchange emissions are huge components resulting from growing carinata. These two factors bring value to the bio-renewable fuel customer, and ultimately producers.”

Agrisoma’s growth model utilizes partnerships involving multiple projects with several land-grant universities and industry support to help conduct research. The southeast Agrisoma carinata program has grown from establishing projects at the University of Florida, all the way to supporting the USDA-NIFA- CAP grant recipient known as The Southeast Partnership for Advanced Renewables from Carinata (SPARC).

SPARC is a comprehensive carinata development project bringing researchers and research together from land-grant universities throughout the southeastern U.S., including Auburn University.

“Extension is helping us to disseminate information in order to bring the community of growers together,” Klingenberg said.

Carla Hornady, Alabama Farmers Federation Wheat and Feed Grains Division Director, said Agrisoma has put in work on the front end of the growing season meeting with producers at meetings hosted by County Federations and through Extension offices. As a result, there are farmers growing carinata this year and more who will grow it in the coming season.

“After another season with low prices, drought and struggling wheat, farmers were looking for another option,” Hornady said. “We are excited to help growers add carinata to their rotations. Both the Farmers Federation and Alabama Extension are working to help farmers diversify operations and profit at the same time.”

Alabama producers sowed carinata as they finish harvesting corn, cotton, soybeans and peanuts. There are currently between three and four thousand contracted acres in Alabama. However, there are expectations to increase acreage significantly in the 2018-2019 growing season.

For now, carinata is an export crop. The buyer for U.S.-grown carinata is in Europe. Klingenberg said once the European market has a consistent supply, and with increased American acreage, producers may be able to look forward to U.S. markets which will involve local crushing facilities and downstream processing in the southeastern U.S.

The Value of Grazed Corn Residue for Crop and Cattle Producers