Grower Says No-Till Made Him ‘Champion of Conservation’

Scott Herriman explains how his cereal rye cover crop benefitted his field of soybeans during a No-till on the Plains field day last August.  Herriman plans to start adding more legumes like clovers and radishes into the mix in the future to continue driving improvements to soil health.

The biggest skeptic about no-till farming should meet Scott Herriman. The South Coffeyville, Okla., farmer made a cold-turkey decision to leave traditional planting-and-growing methods behind and adopt soil health as a way of life. And he’s never looked back.

Herriman, manages 2,000 acres of corn, soybeans, wheat and milo on their farm in northeastern Oklahoma. Their farming heritage is as rich as the soil they’ve created, farming the same tough, riverbottom land for 42 years.

“We switched to no-till primarily because of economics,” Herriman says. “We had to get crops in and provide protection on those crops. Our farm is on river bottom, which is primarily flat but also has some slopes, so protecting the soil enticed me to think about no-till.”

Herriman says his no-till adoption happened 7 years ago after he was thoroughly educated on how and why to move away from tillage systems. He tried no-till in the 1970s but says the ag industry wasn’t prepared with the right herbicides, so he moved back to conventional farming. He served on his county conservation district board for years, but was still skeptical.

Herriman says his riverbottom soil is clay underneath, and after a 2-inch rain under full tillage he witnessed the clay literally sealing itself. Planting any crop was rough on Herriman’s farm ground, and in 2000 he heard about a 3-year Natural Resources Conservation Service (NRCS) program, EQIP, that would cover the start-up costs to implement no-till. He thought only for a moment, then Herriman signed up.

“I stopped in at the NRCS office, visited with them, then went out and bought a heavy duty drill and a large planter,” Herriman says. “That tripped the trigger. I had always thought I’d need special equipment to do it and found out having good soil actually didn’t require much equipment at all.”

The EQIP program allowed Herriman to make the no-till decision overnight. And though he didn’t change back Herriman did doubt his quick judgment. 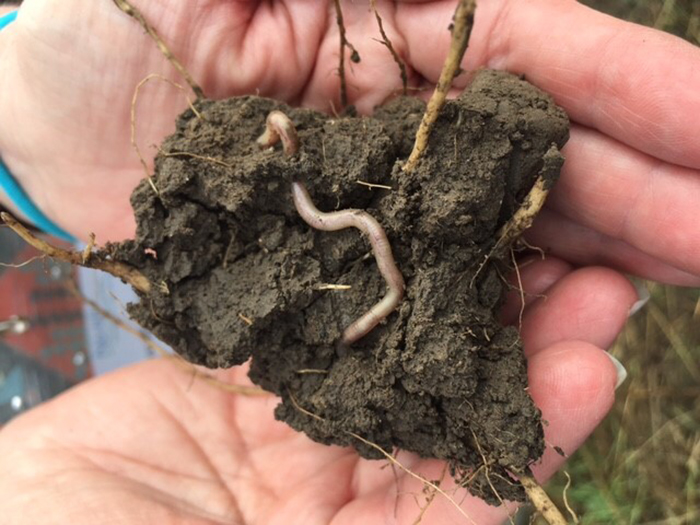 Since switching to a no-till, cover crop system, which also includes livestock, Herriman says earthworms are now easily found in his fields, leaving channels for water and air to infiltrate soils.

“The first year we started my wife said, ‘That’s the ugliest field I’ve ever seen,’” Herriman says. “But now we say the opposite. We drive by a bare field and know what’s happening to that soil underneath. That’s ugly to us now.”

Seven years into no-till production, Herriman says his riverbottom soil is much different. The roots are present from years prior and run deep, establishing a soil structure that allows good crop stands. The soil doesn’t seal over like used to after a heavy rain, and the stability and structure of his soil is so secure, he says, that his large machinery can stand of top of the ground during harvest.

Herriman doesn’t worry about the indentions in the soil, either, because he says it repairs itself the following year. When needed, Herriman plants crops right through the indentions and they’re not visible across the field.

“I make indentions in the ground with my wheels but the tires do not break through like it used to,” Herriman says. “The ground has more structure and holds up quite well. I had heard of this kind of change in soil, but now that I witnessed it I know it’s the truth.”

Knowing soil is healthy can be proven by seeing worms living in the soil. Herriman is known to host field days at his farm, with the one being held last August with No-till on the Plains hosting 50 growers interested in no-till methods. Herriman dug a five-foot soil pit approximately 40-yards inside his bean field. Digging the pit was an exercise to show attendees the bounty of worms that live just underneath Herriman’s top soil.

“The worms are certainly a positive addition because they leave channels or avenues for water and air to get down, especially through clay soils,” Herriman says. “It is a good thing when you can turn a shovel full of dirt over and see hundreds of little worms.”

The visuals Herriman sees in root structure and worms gives him high hopes for the future. Specifically he’s looking forward to years of cover crops and residual roots. It’s normal to want to see beauty on top of the soil, but Herriman says it’s what’s underneath that counts. 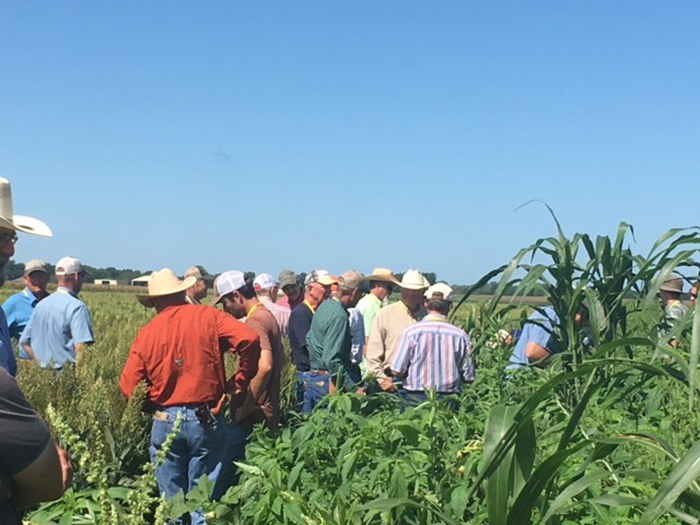 “Our economics have improved,” Herriman says. “Seven years ago, farming and having the equipment we did meant we were going to have to hire a person to continue on, but I’ve not had to do that with no- till. It has allowed me to cover more acres and avoid hired labor and excess fuel.”

The benefits of using cover crops has also given Herriman an economic boost. He likes cereal rye as a staple and this fall will incorporate more legumes like clovers and radishes into the mix.

Herriman says he also knows he’ll realize tangible assets of no-till during his farming career. In 2014 Herriman saw 260-bushel dryland corn and he’s hit several years of 200+ bushel corn since switching to no-till. He entered a yield contest and won it four times in 6 years with his dryland no-till corn. This is what he shares with critics, that he implemented no-till and it works.

“A couple of years ago I noticed things started to come on stronger,” Herriman says. “I won’t say we were penalized those first 2 years, but it was after that 2-year period the yields were coming on strong. Weather patterns were the same, water intake was good, so after just a little period of questions and small doubts, that 3-year window everyone talked about opened up and crops have been improving ever since.”

Five years ago, Herriman sold his cow herd. Looking back now he wishes he still had the cows to provide manure, urine and residue cycling for the soil.

Without being boastful, Herriman says he is a champion now for the cause of conservation. His farm is no longer ordinary but rather extraordinary thanks to an overnight switch.

“I think I am now making a difference,” Herriman says. “It’s tough to work on a farm, but no-till has been proven here and I’ll continue to expand on it. That’s part of being a champion of cause.”